[Hello, Cincy Jungle readers. Congratulations on your selection of Devon Still, who is awesome and will totally eat Ben Roethlisberger. Enjoy this profile, and check this post for more information. Thanks for stopping by. - Chris G.]

Workouts: Still, alongside several of his fellow seniors, was invited to workout at the NFL Combine, bench pressed 225 pounds 26 times, and impressed scouts with his 40-yard dash time (5.08 seconds) and his lateral quickness during agility drills. Even so, Still, hampered by a lingering turf toe injury, thought he had more to offer. He was right. He worked out at Penn State's Pro Day in March, dropped 0.08 off his 40-yard dash time, and showed off his superior agility again in the 20-yard shuttle run (4.65 seconds) and the 3-cone drill (7.70 seconds).

Everything Else: All you really need to know about Devon Still is in the following story. Still tore the ACL in his left knee during his redshirt season in 2007. Though he recovered and looked poised to earn playing time on Larry Johnson's stacked defensive line as a redshirt freshman, he broke his ankle in August. Most players would have looked to rehab their ankles and hope they could convince the NCAA to grant a sixth year of eligibility. Not Devon Still. Instead, he came back on the field the very same season and saw 10 snaps against Michigan State in the final game of the 2008 Big Ten Championship season. 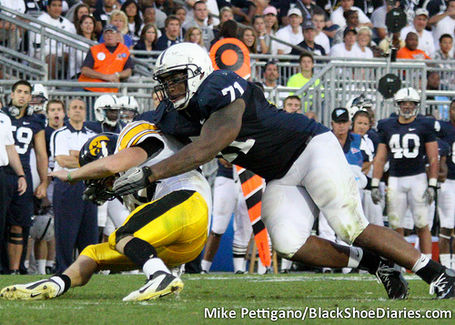 Still's sophomore and junior campaigns were strong, including a terrific Outback Bowl performance against Florida, where he led the team with 3.5 tackles for a loss. But it was the 2011 season where Still lived up to his potential, becoming a consensus first-team All-American and perhaps the most dominant defensive player in the country. There was little debate when Still was named the conference defensive player of the year.

The best word to describe Still is disruptive. He's not a space eater-type and will not play nose tackle at the next level. He has a very quick first step, uses his hands well, and gets into the backfield effectively. He's versatile - he can play DT in a 4-3 scheme or as a DE in the 3-4 scheme. Still's worst trait is apparently that he used to play too tall and, consequently, without much leverage. That problem has been fixed, but it still rears its ugly head when he becomes fatigued. Additionally, he will need to add to his arsenal of pass rushing moves to stay relevant as a 3-technique tackle. However, listening to Still's competitive nature, that doesn't sound like it will be much of a problem:

"What drives me is that when I first started playing football, whenever I do something, I'm very competitive," he said. "I want to be the best at it. When I got injured my first two years at Penn State, a lot of people said I wouldn't be the same player as I was when I showed up on campus. I think that drove me just to prove everybody wrong. To this day, I don't think I'm where I need to be right now. I want to make my mark in the NFL, just as I did at Penn State, and become one of the best."

Still is projected to go late in Thursday's first round, or, at a minimum, sometime during the early-second round.