Share All sharing options for: Jack Crawford, Johnnie Troutman, and Nate Stupar Selected on Day 3 of the NFL Draft 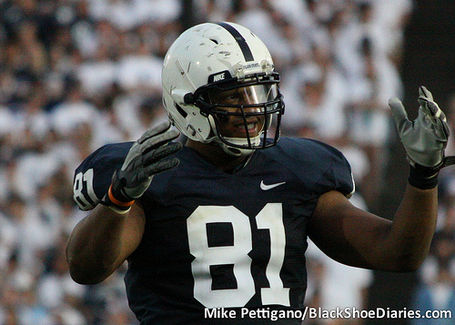 Another NFL Draft has come and gone, Mel Kiper's hair is still intact, Chris Berman continues to anoint new draftees with horribly shoddy nicknames, and three more Penn Staters joined Devon Still amongst the ranks of those who were selected by an NFL franchise looking to fulfill whatever needs of theirs needed, umm, fulfilling...

Johnnie Troutman went to the San Diego Chargers in the 5th round, where the offensive guard will get the opportunity to work his way into a regular role of protecting Phillip Rivers from opposing defensive linemen. Our colleague, Keith Platt noted the following in BSD's ongoing Your Team Drafted [Insert Ex-PSU Player Here], Now What? profile of Troutman:

As for his game, Troutman is all power and intensity that will serve him well as a run blocker on the next level. However, he may not have the hand quickness or lateral agility to handle pass blocking against interior pass rushers like Ndamukong Suh, Nick Fairley, Tommie Harris, etc.

Jack Crawford (pictured above, exaggerating the size of...we'll let you use your imagination) was the next Nittany Lion selected, also going in the 5th round to the Oakland Raiders. After ranking 28th in the NFL in total defense last year, the Raiders can use any sort of help possible on defense, but Devon had some words of caution in his draft preview for those who may be expecting Crawford to contribute immediately:

NFL Prospectus: Whichever team drafts Jack Crawford is going to have to be patient, and they have to know that they're gambling with a mid-round pick. Yes, Crawford has the elite raw athleticism that you can't teach, and coupled with his size, it makes him a very versatile prospect who could fit in a number of schemes. However, and perhaps the lingering injuries were the cause, Crawford never replicated the performance of his standout sophomore campaign. Even that year, he never displayed a great motor or burst in chasing down plays, and often seemed somewhat stiff. Inexperience may well have played a factor, but he rarely had much of a burst off the line, and too easily was taken out of plays.

But given time, and given a coaching staff that can impart into him a higher football I.Q., it's very easy to see Crawford making an impact in the NFL, perhaps most likely as a two-down linebacker in a 3-4 system. The best comparison I can make is to the Jets' Bryan Thomas, who never panned out as the pass-rusher New York expected he might, but developed into a superb run-stuffer from the linebacker position. I'm sure every team would sign up for that kind of production from a 4th, 5th, or 6th round draft pick.

Also joining Crawford in Oakland is Nate Stupar, who was selected by the Raiders in the 7th round. As far as how the latest Linebacker-U-to-NFL draftee's career may pan out, one can only hope that at the very least, it follows that of Jared's take from his draft preview of Stupar:

Whichever NFL team ends up with Stupar will likely be satisfied with the pick. His NFL career seems likely to follow his college football trajectory. He has the ability to contribute immediately on special teams, and should eventually earn a spot in the rotation over time. He may never find his name listed on the All-Pro team, but certainly has the brains, passion and ability to have a long and steady NFL career.