It's the basketball offseason meaning the focus has shifted to recruiting. The staff has already assembled a good deal of the foundation for the future, securing commitments from seven players who will be eligible in 2014-2015 in just their first season. While such a large haul in one year might be cause for a little break, recruiting never stops. In fact, Chambers hasn't given up yet on adding to the 2012 class. One might have assumed since the spring signing period was over that PSU was finished, but there's still time to add to the roster. Remember, signing a letter of intent is a voluntary process for recruits anyway.

There are still just four scholarship guards on the roster after the departing transfers in March. The staff exhausted their 130 recruiting days allowed per academic year and are unable to leave campus and evaluate prospects. It's a quiet period right now so any off campus contact is prohibited anyway, but school visits can be made and electronic communication is permissible.

The staff still seems intent on adding some backcourt depth and have two known visitors scheduled to make official visits in the next week. 6'4" shooting guard Roderick Lawrence from Florida begins his visit today. Lawrence is a Morehead State decommit, who was just released from his LOI after coach Donnie Tyndall left to take Southern Mississippi's job. The other visitor is 6'1" point guard Kaza Kajami-Keane from Canada who is scheduled to visit next week. Keane reclassified to the 2012 class during this past season, and the unconfirmed twitter report claims he is down to PSU and Illinois State.

There are three scholarships still available on next year's roster, but any late signing will affect the number of scholarships in the 2013 class. Currently there are just 2 available for 2013 (in addition to Geno Thorpe and Brandon Austin), and that would decrease if PSU landed either of the two visiting guards. But as we have seen this year, these things can change in a hurry. There will be 2013 and 2014 recruiting previews in the next few weeks, but for now, here's the scholarship matrix for reference. 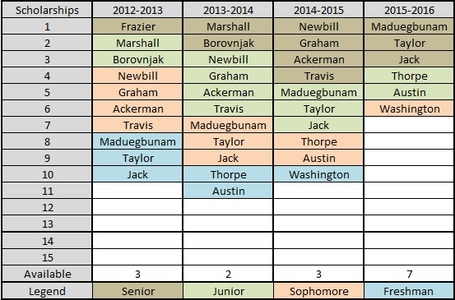 The NCAA approved a new recruiting model last October and a lot of those changes will soon be in effect. The biggest change will be enacted in just a few weeks as communication between coaches and prospects will be completely deregulated. Starting on June 15th, coaches are allowed to call/text recruits who have completed their sophomore year as much as they want (sorry, Kelvin Sampson). I don't expect this to dramatically change the recruiting world, but it does eliminate silly violations and could cause plenty of facebook deactivations.

Tomorrow night is Philly's 18th annual All-City Classic event. The best prep stars in the city will flock to the Community College of Philadelphia for three games pitting the best freshmen, sophomores, and juniors against each other. PSU verbal Brandon Austin is scheduled to play in the junior game, while plenty of familiar targets will also be there. You can find the full rosters here courtesy of PhilaHoops.com. Some of the big names include 2013 prospects Rysheed Jordan, BJ Johnson, Miles Overton, and Rondae Jefferson, and 2014 guards Ja'Quan Newton and Shep Garner.

Both of PSU's 2013 pledges (Austin and Geno Thorpe) were invited to the 10th annual Pangos All-American camp, which will be held this weekend out in Long Beach, CA. This premiere event attracts some of the best talent all over the country. The national exposure will give the guards a chance to really showcase themselves along with PSU basketball in front of scouts and more importantly, other top uncommitted prospects. A good impression by either player will benefit recruiting and the program's perception across the grassroots level.

Geno started out the AAU season with King James Shooting Stars who played in Nike's EYBL. But after just two sessions, Thorpe left the program saying the team wasn't a good fit. He plans to team up with Austin and Team Philly for the July live period. It will give the two a great opportunity to develop chemistry together while taking on some top competition on the AAU circuit.

Stay tuned for more hoop news in the coming week and (shameless plug) follow me on twitter for the latest on PSU hoops recruiting.