Share All sharing options for: Only Charlie Sieminski Until Penn State Football 2012 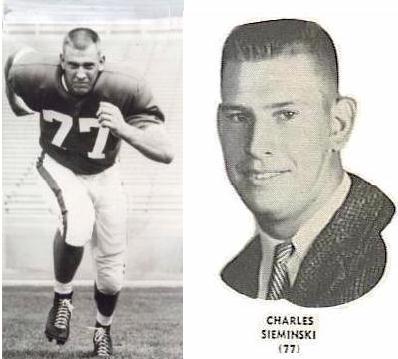 Charlie Sieminski was 2nd-team All-America OT for Rip Engle's 1962 squad. In the bottom shot he's pictured with fellow All-Americans Dave Robinson (#89, LB) and Roger Kochman (#46, HB) with Coach Engle, next to the fancy new Beaver Stadium, which had opened in 1960 - after being disassembled and moved from its former location, near present day Rec Hall.

Patrick Christie is the current owner of #77, and hails from Boiling Springs. That's the 717, yo.