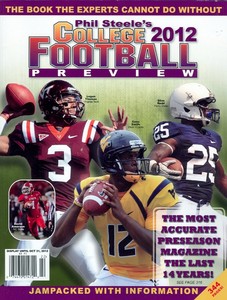 [Pick up your copy off the interwebs here, or just swing by the grocery store on your way home like I did.]

For the last 14 years, Phil Steele's published "the most accurate preseason magazine" in the entire universe. I have no idea if that's true or not, though if he's picking against the likes of Rick Reilly, it's not that high a bar. Be that as it may, it's sometimes helpful to read what a non-fan thinks of your team's chances. Gives you a little perspective, if nothing else.

If Phil's prognostications are remotely accurate, Penn State nation will be chowing down on a turd sandwich in 2012. That is to say, he wasn't overly optimistic for our chances.

But before we make the jump and dig into what Phil thinks for 2012, let's give his marketing team a nice round of applause for their choice of Silas Redd on the mid-Atlantic regional cover. The photo you see above is the same as the copy I picked up at my grocery store, approximately 10 linear miles from College Park, MD (75 minutes driving time), home of the Maryland Terrapins. The cover features Silas, along with Virginia Tech QB Logan Thomas, and West Virginia QB Geno Smith. We also got a small inset of NC State DB David Amerson.

Terps? Shut the front door. Based on my vehicle decal survey when stuck in traffic, the marketing department probably should have dropped Geno Smith for Gerald Hodges, and dropped Amerson for Jordan Hill. A nice 3:1, Penn State : VaTech car logo seems about right.

Let's start with Phil's All-BigTen teams, which he publishes (free) online at this link. He selects four teams. Each team has 12 offensive players, 12 defensive players, and 4 specialists - 28 positions per team, 112 positions total.

Let's make a table to compare the distribution among the schools:

(Phil does the same on a national basis - 4 teams, 112 positions. Gerald Hodges made his 2nd team at linebacker. Penn State was otherwise shut out.) 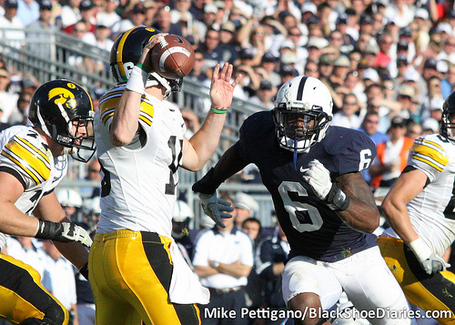 Does PSU have players that should have made one of the four preseason Big Ten teams who did not? Surely we must. For a 'slight' to exist, though, I'd think that the player must have proven something in the past. And unfortunately for Penn State, we don't have a ton of returning starters. Actually, PSU has just 9 total (by Phil's math) - fewest in the Big Ten. (And, as Phil also points out, PSU has a grand total of 17 starts returning on the entire O-line - among the fewest in the nation.)

The only returning starters not already named by Phil include:

Outside of Stank, I can't give Phil much argument for not including more Nittany Lions on his team, if proof-of-past-performance is the benchmark. The squad is short on game experience, relatively speaking.

This ranking must be special because it gets more than a page's worth of explanation. It's towards the end of the magazine, around page 331. So yeah - I didn't actually read the explanation.

Whatever "Power" means to Phil, PSU comes in at #53. We're neck-and-neck with Purdue, Iowa and Illinois. The silver lining, if you want one, is that we don't play many squads that rank very highly.

Penn State is next to last in the Leaders Division, besting only Indiana. Phil's prediction? The Nittany Lions "will struggle to make a bowl."

Won't make a bowl? Or, Little Ceasar's in Detroit if we're lucky? Come on, dude!

Yeah, I can see how that could happen, even if I don't believe it. Pass the bourbon, Lee Harvey.