Share All sharing options for: Well Then, Let's Go 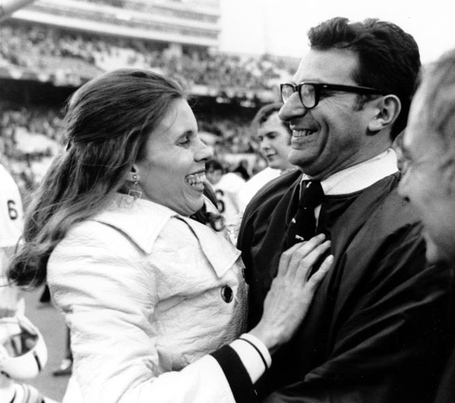 Hell hath no fury like an old sportswriter fooled. Their hate fueled words, shouted as loudly as they're able, echo across the interwebs for the unbaptized to consume.

Sally Jenkins, Rick Reilly, and Gene Wojciechowski all wrote columns praising Joe Paterno in the past. Each column was another brick in the temple erected to "Saint Joe". But now they feel guilty. While the Paterno temple was maintained by fans, it was designed by sportswriters like these. And they want their pound of flesh.

With the "reasonable" conclusions of the Freeh Report, those sportswriters hate what they've designed, and want it destroyed. Now their columns instruct fans how to obliterate the temple. Gene, for his part, keeps it simple - Joe lied, and Geno's pissed off about that.

Rick takes it a step further, because his brick was first laid in the 1986 Joe Paterno Sports Illustrated Man of the Year piece, in which Rick leads as follows:

In an era of college football in which everybody's hand is in the till or balled up in a fist, Paterno sticks out like a clean thumb.

That was a homerun lead, Rick.

But now, for Rick, Joe was a liar and a coward and a phony, and damnit, Rick should have recognized it 30 years ago.

Sally has the most reason to be pissed off, of course. First, Sally's father Dan, one of the greatest sportswriters ever, laid the Keystone in the Paterno temple over 50 years ago for Sports Illustrated. Second, Sally's November column was a lone voice in the cacophony of hate and anger eight months ago, preaching patience for the process, and explaining why pedophiles so often are difficult to identify. And last, she rightly feels, Joe lied to her just before he was taken to the hospital for the last time. Joe did know, or at the very least, was aware of, the 1998 investigation into Sandusky. So naturally, Sally spares no insult in her latest column. She smashed her bricks, her father's keystone, and every other brick she could reach in the Paterno temple.

Good for you, Sally. The imbecile mob would expect no less.

There are other writers mobbing the Paterno temple that these giants designed, to be sure. All of the new columnists like Dan Wetzel or Gregg Doyel or Andy Staples tee-up Joe and Penn State because, I suppose, it's an easy column to write. They're all too young to have played a part in building up Joe's legend, so they lack the personal betrayal of Geno, Rick and Sally. But given the volume of such columns, that just means they're unimaginative and unoriginal.

Nothing feels better than knocking out 800 words in an hour-and-a-half, amirite guys?

Last but not least, we have a veritable shit ton of guys like Brian Cook at mgoblog*. Brian's hate is fueled by the utter pretentiousness of Paterno, Penn State fans, and "Success With Honor." What an absurdity it all was, he writes. What folly. What pure joy to see it wrecked.

What delicious comedy, I say, that a Michigan Man is offended by another's pretention.

*mgoblog is a great site. Really. They do an outstanding job, even if I hate their guts and hope they die in a fire after sliding underneath a gas truck.

I understand the anger from Geno, Rick and Sally. I share it. Joe failed the victims, the community, and himself in this tragedy. But I expect more than just anger from such accomplished writers.

I expect them to understand that the reason they feel anger, hurt and betrayed, is because the actions of the Paterno they thought they knew were, in fact, real. Those actions spurred them to design a temple of polished white alabaster. But when it revealed itself to be gray marble, they suddenly wanted it painted black.

That's too simple. It's an unworthy effort. I expect better from them. They know the best stories are the hardest to write. The most interesting characters are interesting precisely because they are flawed. And in this respect, each of their columns fell short.

The real story is this: through their flames and smoke, the anger and hatred, and the schadenfreude of Jackie Sherrill and Brian Cook - through all the present bullshit, Joe's best legacy remains.

The legacy isn't the statue in front of Beaver Stadium. The mob can have that, for all I care. Take it down. Joe never liked it to begin with.

It's not even the Library, or the College of Liberal Arts, or the Paterno Fellows, or the Religious Center, or the Centre County Special Olympics, or the Greek Scholars.

And it's not just the football lettermen, so many of whom graduated and enjoy successful, productive lives.

It's the Penn State Way. It's an ethos. It's why Penn Staters are so conflicted and upset.

The Penn State Way commissions a multi-million dollar independent investigation which, in eight months, revealed more than did three years of state criminal investigations. Then, the Penn State Way publishes the painful results for the world to mock, while we admit our mistakes, and resolve to move forward and improve.

Do you know why Penn State alums have been so angry with you, Board of Trustees? It's because you acted precisely opposite of the Penn State Way, when you fired Joe without facts; then claimed he wasn't fired; then requested his 1980 PSU rotary telephone using a form letter; and then fired him again in another press release.

But, at least you spent $6.5 million wisely. At least you redeemed yourselves.

That's right, lazy, angry sportswriting jerks. The reason you can tear down the Paterno temple; the reason you can claim Joe lied is because Penn State investigated itself more critically than the Commonwealth government. Then, it told all to everyone. How does that compare to SMU you nooby stooges?

WE don't cut corners. WE play all or none. WE do the right thing. WE maintain higher standards. WE give our best effort always. WE help the less fortunate. And, WE stand up, are counted, and WE FIGHT! when WE see a wrong. That's why...

WE ARE. PENN STATE.

That is a great legacy. It's a far sight better than the sportswriters' Paterno temple. And no amount of scorn, contempt, or shouting can change it.

Now get off my lawn.