Share All sharing options for: Only Jordan Hill Until Penn State Football 2012 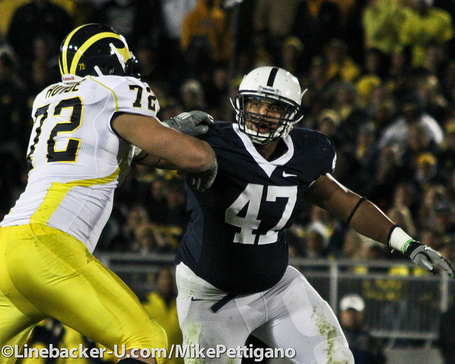 Coach Larry Johnson's next All-American defensive tackle, Jordan Hill, means it's only 47 days 'til the season opener against the Bobcats of Ohio University. Jordan has been a mainstay on the defensive line since his true freshman year, and even recorded 4 starts as a sophomore. Last year, Hill had his breakout campaign next to All-American (and Big Ten Defensive Player of the Year) Devon Still. This year, Hill will be the focus of everyone's attention and has already been named to the watch list for the Outland Trophy, given annually to the top interior lineman in the country. Go get 'em, Jordan.