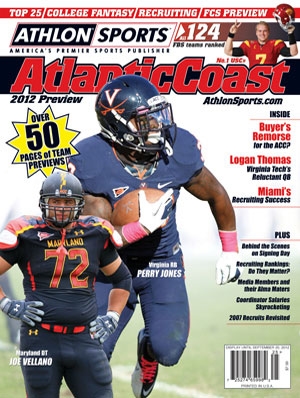 Previously we reviewed Phil Steele's thoughts on Penn State's 2012 football prospects. Next up are the fine folks from Athlon Sports. What will they have to tell us about our Nittany Lions' chances?

HINT: it's a slightly prettier forecast than Phil gave us.

As always, we have to start by reviewing their regional cover photo. The Athlon marketing department gave us a Maryland Terp and a Virginia Cavalier. The Virginia player is labeled Perry Jones, but might actually be an old stock photo of Tiki Barber from the mid 1990's. I can't imagine anyone actually covering UVa football recently. This is an inauspicious start.

Speaking only for myself [Ed. note: the opinions of bscaff do not necessarily reflect the thoughts or opinions of Black Shoe Diaries], when I hear 'cavalier', I think of a bad Chevy car. And then I think of prancing gay pirates. It's entirely likely that UVa students also think along these lines, which is why they refer to themselves as Wahoos.

Terps? Who cares about Maryland football besides Kevin Plank? Seriously. I'm as flabbergasted by this notion as Dark Helmet was after he stole Lone Starr's schwartz ring using the 'put-er-there' handshake trick. 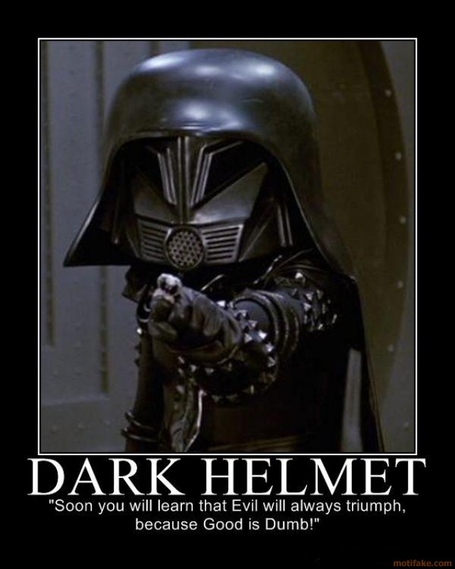 I'm a Maryland alumnus (post grad), and I'm not sure they even have the sport anymore. The truth is that you could sum the season ticket holders from Maryland and Virginia, and they wouldn't fill half of Beaver Stadium. So come on, already, Athlon marketing folks. I understand that you publish eleventy billion different covers, and that you're trying to throw these schools a bone. But if you leave them out, no one is going to notice.

Athlon gives us three All Big Ten pre-season teams. Each team has 11 offensive, 11 defensive, and 4 specialist positions. With the knowledge gained in my STAT100 class*, I've determined that equals 78 total positions. Athlon kindly lists each player on each team at this link. To save you the effort of making a mouse click, I'll just tell you that LB Gerald Hodges is PSU's only 1st teamer. Silas Redd and Jordan Hill are 2nd teamers, along with P Anthony Fera and punt returner Justin Brown. Placekicker Anthony Fera, twin brother of Punter Anthony Fera, is the lone Lion on Athlon's 3rd team. Six positions out of 78 is..(using calculator)...a tick below the 6.5 positions of an equal distribution. We need a third Fera that specializes in drop kicks.

Below is a table of the position distribution across all Big Ten schools. Penn State lands 6th, a step or two below the top squads.

Penn State is not found. Moving right along...

The wise men and women of Athlon rank each team in the FBS. Southern Cal is #1. The new-to-FBS University of Texas at San Antonio is #124. They're coached by Larry Coker, who won a MNC with Miami in 2001 that was purchased with a Ponzi scheme designed by Nevin Shapiro, pictured below with Kellen Winslow Jr. 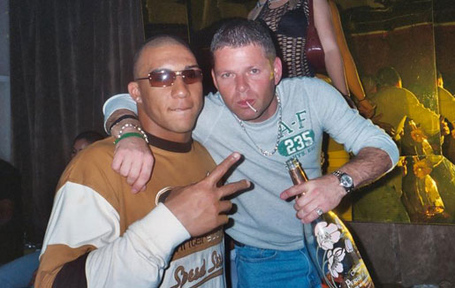 [Who would suspect this guy of running a Ponzi scheme? Don't all boosters look like this? Seems completely legitimate to me. Bonus points for wearing multiple bracelets, a pinky ring, and holding an empty bottle that's painted with pink flowers, in front of a stripper wearing black fishnet. Chewing on a stir-straw really completes the booster look. Given those attributes, I'm fairly shocked that he'd have an oral fixation.]

Penn State is ranked #44 by Athlon, just behind the RichRod-led Arizona Wildcats, and just ahead of those funny Pitt Panthers. According to Athlon:

2012 represents a new era at Penn State, but Bill O'Brien's first season in Happy Valley could be a struggle if the quarterback play does not improve.

Can you believe that crap?! Athlon is talking smack, dude. Just like Herbstreit did two years ago, when he basically said that Penn State will suck because they only had some "walk-on" (meaning, you) at QB. Cut-and-paste this one, brah. Have Spider frame it for you, and hang it in your locker. Let it marinate for the next six months, and then, after you lift the BigTen championship trophy over your head, and new FOX broadcaster Erin Andrews sticks a microphone in your face to get a comment, say "it's a great feeling. I'm just trying to help out the team any way I can. All credit goes to my coaches and teammates. The good Lord willing, we'll continue to be successful." But really, you'll be thinking "suck it, Athlon. How's it taste?" And, "what are you doing later, Erin?"

Where does a #44 rank put the Lions overall? As mentioned earlier, Athlon has a slightly rosier outlook, placing Penn State third in the Leaders division, behind an ineligible Ohio State and those douchea-led Wisconsin Badgers. They also hedge their prediction with this little nugget:

While reaching the 2012 BigTen title game certainly isn't out of the question,

...2012 will more than likely be a year of transition and struggles.

But let's end on a positive. A third place finish in the Leaders division probably gives us about an 8 - 4 mark on the season - that's a solid investment in the O-B future. A very nice building block. Keep moving forward.