Too Much Information 2012: the Illinois Edition

Share All sharing options for: Too Much Information 2012: the Illinois Edition

Week 5 the Nittany Lions will travel to Champaign to take on the Fighting Illini. You never know what you’ll get from the Illinois they are a bit Schizo but not to worry, we’re here to educate, and knowledge starts with Too Much Information: the Illinois edition.

Thanks to the Morrill Act of 1862, each state was granted a portion of land on which to establish a major public state university. After a fierce bidding war between a number of Illinois cities, Urbana was selected as the site for the new "Illinois Industrial University" in 1867. Most Penn State fans will think of Champaign when they think of Illinois because that’s where the football stadium is, but in reality the academic facilities are divided almost exactly between the twin cities of Urbana and Champaign.

As some of you may or may not know, I am a software engineer and the rest of this preview is sponsored by my nerdy love of computers, so feel free to skip ahead. Illinois is home to some of the highest-ranked Engineering, Computer Science, and Information Science programs in the United States. The university hosts the National Center for Supercomputing Applications (NCSA), which created Mosaic, the first graphical Web browser. Mosaic is the backbone for other browsing software such as Firefox and Microsoft Internet Explorer. The university is currently collaborating with IBM and the National Science Foundation to build the world’s fastest supercomputer. If successful this supercomputer, named "Blue Waters," will be capable of performing one quadrillion calculations per second. That’s three times faster than today’s fastest supercomputer.

The intercollegiate athletic teams of the University of Illinois at Urbana-Champaign (-ed. note: man that’s a mouthful) are nicknamed the Fighting Illini or just the Illini. From 1926–2007 the mascot was Chief Illiniwek a Native American figure who sparked significant controversy beginning in the 1980s. On February 16, 2007 Chief Illiniwek made his last public appearance at a men’s Basketball game as University Board of Trustees decided to ban the use the mascot. Amazingly this Native American depiction is highly offensive but others aren’t. 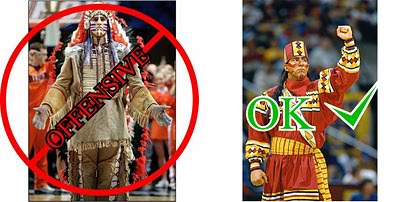 Yes, it is ridiculous. Moving on…

In 1889 a student by the name of Scott Williams noticed a bulletin looking for football players. Upon arrival he witnessed a group of students chasing and kicking a ball in a manner that barely resembled the game of football that he played at State Normal University, more than 50 miles west of Champaign. Good to know things haven’t changed over the years *zing*. The following year Williams, serving as coach, captain and quarterback took the first Illini football to a 1-2 record including a 62-0 beat-down by the hands of the Purdue Boilermakers. Williams stepped down as captain and coach after the 1890 season, but remained on the roster as a player on the 1891 Illinois team, winners of all six games and champions of the Illinois Intercollegiate Football League, whatever that is. Amazingly, Illinois has almost as many national titles (5) as they do bowl victories (8) along with 15 Big Ten championships. Most of their national titles came long before you or I were born with the last occurring in 1951.

Illinois has had two straight bowl victories but before that they didn’t have a bowl win in the previous decade, although they did have the magical season in 2001 when they won the Big Ten. For most Nittany Lion fans that season and the seasons around it are subconsciously erased from our memories. Last season the fighting Zookers started out with 6 straight victories and then lost 6 straight ending the tenure of coach Ron Zook, to the chagrin of all sports bloggers everywhere.

Of course everyone knows the most famous player to play for the Illini was Dick Butkus, but there were quite a few more famous Fighting [non-offensive-mascot replacement]. Jeff George played for Illinois as did Red Grange, George Halas, and Ray Nitschke. Ok, that sentence got infinitely better as it progressed.

Eddie Johnson played for Illinois and so did Scott Spiezio and Justin Spring (member of the bronze medal-winning men’s gymnastics team at the 2008 Summer Olympics).

The non-athletic list of alumni is even more impressive. 10 Nobel Prize winners called Urbana–Champaign home as did 11 Pulitzer Prize winners.

Alan Ruck, of Ferris Bueller’s Day Off fame went to Illinois. Ang Lee graduated from the University of Illinois at Urbana-Champaign before winning an Academy Award for Brokeback Mountain. He also directed the Hulk. I mention that because I actually saw the Hulk and I absolutely refuse to watch Brokeback Mountain, I don’t care how many awards it gets.

Seven Astronauts graduated as Fighting [non-offensive-mascot replacement]s. If you want "set it and forget it" you’ll be using a product created by an Illini. Neal Doughty of REO Speedwagon fame graduated from Illinois as did Robert "Buck" Brown. If you don’t know who Brown is you must not read the cartoons in Playboy. Speaking of Playboy, the most important alumni to graduate from Illinois was most defiantly Hugh Hefner. (Ok, important from a man’s perspective)

Jesse Jackson was expelled from Illinois but his son Jesse Jackson Jr. accomplished what his father could not.