Too Much Information 2012: the Northwestern Edition

Share All sharing options for: Too Much Information 2012: the Northwestern Edition

After a trip to take on the Fighting [No-Longer-Zookers], the Nittany Lions return home to take on the Wildcats of Northwestern. Northwestern won’t be a team to take lightly, they always seem to beat a team they shouldn’t each year. The only way to stave off an upset is to know your enemy and knowing starts with Too Much Information: the Northwestern edition.

I often wondered how Northwestern got its name, I mean technically speaking the university is in, Illinois which is neither north nor west. 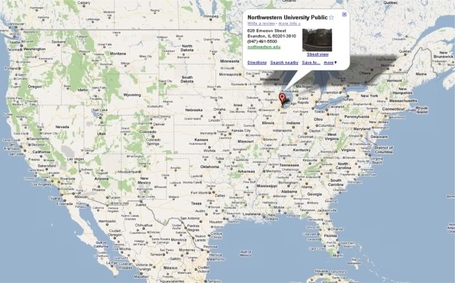 Well in its day the area that is now Evanston was technically a northwestern part of the union as its name suggests: the Northwest Territory. In 1851 John Evans, who Evanston was named after, and 8 prominent Chicago businessmen founded the university. On January 28, 1851, the Illinois General Assembly granted a charter to the Trustees of the North Western University making it the first recognized university in Illinois. Northwestern is the Big Ten’s only private university so it had to raise the money for construction without government help. In the beginning the university sold $100 "perpetual scholarships" that entitled the purchaser and his heirs to free tuition. In 1873, the Evanston College for Ladies merged with Northwestern and the first female student graduated in 1874. In 1933 the tough economic climate of the Great Depression almost forced Northwestern to merge with University of Chicago but the proposal was rejected by both schools.

The relationship between the town of Evanston and Northwestern has not been pleasant. Disruptive anti-war protests, disputes over municipal zoning, building codes and Northwestern’s exemption from state and municipal property tax obligations under its original charter had been a source of tension and led to a federal lawsuit between the city and university which was settled out-of-court in 2004.

The athletic teams that represent Northwestern University are known as Wildcats. Before 1924, they were known as "The Purple" and unofficially as "The Fighting Methodists." In 1924, Wallace Abbey, a writer for the Chicago Daily Tribune, wrote that even in a loss to the University of Chicago, "Football players had not come down from Evanston; wildcats would be a name better suited to Coach Glenn Thistletwaite’s boys." The team was also referred to in the article as "a Purple wall of wildcats." The university board members liked the name so much that they made "Wildcats" the official nickname months later. The Northwestern Wildcats mascot is Willie the Wildcat: Not to be confused with Willie the Wildcat for Kansas State.

Originally the first mascot for Northwestern was a caged bear cub from the Lincoln Park Zoo named Furpaw. In the fall of 1923, Furpaw was driven to the playing field to greet the fans before each game. Unfortunately, the soon-to-be Wildcats had a losing season that year and instead of blaming the guys that actually stunk it up on the field they blamed Furpaw for bad Juju. (ed. Note – sorry, I could find no pictures of Furpaw)

Purple became Northwestern’s official school color in 1892, replacing black and gold after a university committee thought that the colors were common, although today white is a de facto official color mentioned in both the university’s Alma Mater ("Hail to purple, hail to white") and some university guidelines.

The Northwestern "Fighting Methodists" football team has 8 conference championships, the last coming in 2000. They have no recognized national championships and have played in 10 bowl games winning only one, although it was the Rose Bowl but it occurred way back in 1949. The only other football related history worth mentioning is that current coach Pat Fitzgerald won the Bednarik Award and Bronko Nagurski Trophy twice (95-96) as a player. That and former coach Gary Barnett won the Paul "Bear" Bryant and Coach of the Year Award for the 1995 Rose Bowl season.

There are currently 14 Wildcats on NFL rosters and a total of 36 All-Americans have passed through Northwestern. Now forget sports, NU has a boatload of famous Alumni… HOLY SHIT, STEVEN COLBERT!! 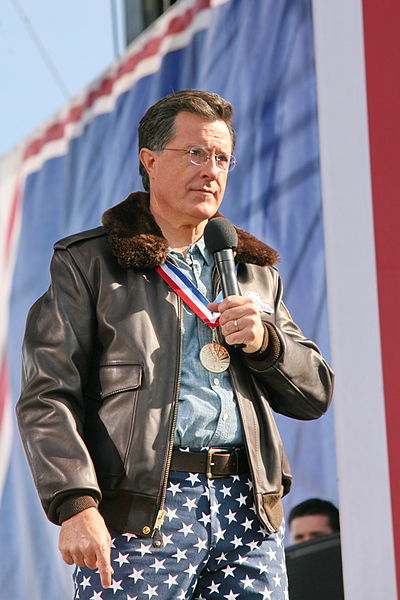 Northwestern, this makes up for the decades of bad football

But that’s not all, other famous Wildcats include Mike Greenberg of ESPN’s Mike & Mike fame. Warren Beatty and Ann-Margret graduated from NU. Before he was clutching his gun for the NRA, Charlton Heston called himself a Wildcat. 1999 Miss Illinois Jade Smalls and actress Julia Louis-Dreyfus went to NU. Charles Horace Mayo, co-founder of the Mayo clinic went to Northwestern as did comedian Seth Meyers and Supreme Court Justice John Paul Stevens. Dick Gephardt was a Wildcat which may be good or bad depending on your political affiliation but there is one giant Douchebag that NU would like you to forget: Rod Blagojevich. Cindy Crawford, Ira Glass, and Hugh Hefner attended Northwestern but never graduated.

Oh, and some guy named Graham Spanier graduated from Northwestern.