Share All sharing options for: Nittany Mountain: The 1960s 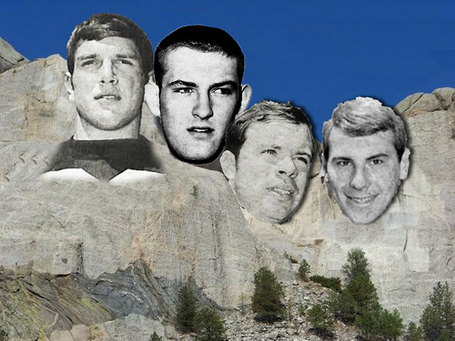 The 1960's began like the 1950's, with crew cuts and horn-rimmed glasses. They ended with a long-haired, counter-culture hippie-ness that lives on among Phish followers in West State College to this day. Coincidentally, Penn Sate Football of the 1960's was bisected by the promotion of one Joseph Vincent Paterno to Head Coach - a man who kept the horn-rimmed glasses until at least the mid-1970s.

Your Finalists for Nittany Mountain: the 1960's Greatest Football Players after the jump. 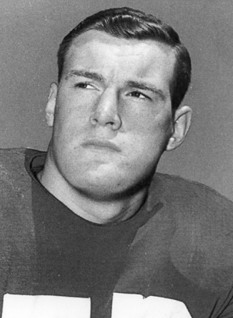 Glenn Ressler beats Bill Cowher in a squarest jaw competition. Glenn also won the Maxwell Award, given to the nation's best player, his senior season - as a Nose Tackle. How in the world does a NT win the Maxwell Award? He starts by recording 15 solo tackles during a 26-0 ass-kicking of then #1 Ohio State and Woody Hayes in 1963. Glenn starred in the rematch in 1964, another win for the Lions. A two-way player at PSU, Glenn enjoyed a 10-year career in the NFL, all with the Baltimore Colts as an offensive lineman, blocking for Penn Stater Lenny Moore, and winning a Super Bowl in 1971. According to "The Goon Show", Glenn was spotted recently in State College, and appears to remain fully capable of kicking your ass, despite his age. 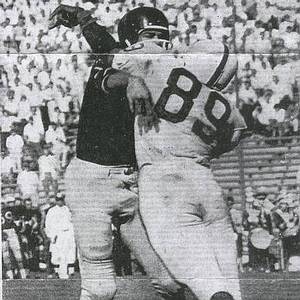 Dave Robinson was an All-Everything, two-way End for Rip Engle's Nittany Lions. Dave switched to Outside Linebacker in the NFL, where he was a perennial All-Pro for Vince Lombardi's Green Bay Packers of the 1960's, and a defensive leader of the first two Super Bowl Champions in 1967 and 1968.

Your Nittany Mountain, Greatest Football Players of the 1960s 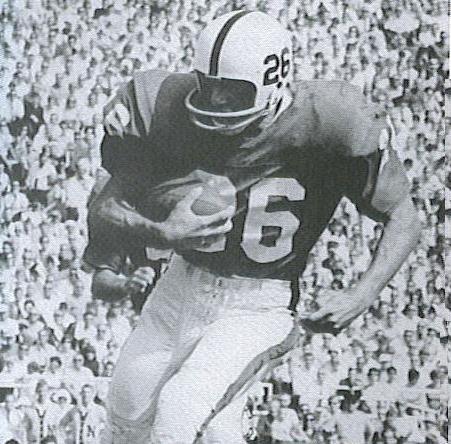 Despite the fact that teams were loathe to use the forward pass - particularly compared to today's squads - Neal Smith remains Penn State's All-Time Interceptions leader, with 19, in his three seasons of eligibility. Neal also holds two of the top 5 single season INT totals.

Unheralded? Neal played defensive line for a losing Selinsgrove High School team. According to Coach Paterno, "no one had ever heard of him until he show up for freshman football" in 1966. Neal became the first player in a decade at Penn State to earn a starting spot as a then-non-scholarship player in his first year of eligibility, 1967. He tied the single-season interception total his junior year, 1968, with 8 INTs. He also blocked the punt which set up the game-winning touchdown against Kansas in the Orange Bowl that year, and preserved Coach Paterno's first undefeated season. To top of his career, he broke the career interceptions mark (then 12) just four games into his senior season of 1969. And, he broke his own single-season INT mark that year, snagging 10 total picks as the Nittany Lions finished a second consecutive undefeated season. Not bad for a 5'10", 180lbs safety-man that no one had ever heard of until he simply 'showed up' for freshman football. 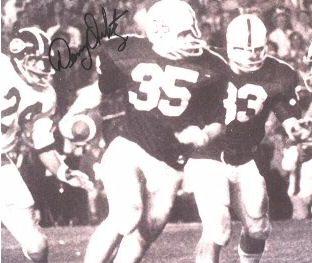 Denny Onkotz is widely recognized as the founder of Linebacker U, being the first in a long string All-America linebackers for Coach Paterno's squads. He's probably on the All-Time Nittany Mountain for that fact alone.

Denny fills the Teddy Roosevelt all-around bad-ass position on Nittany Mountain because he was also the team's punt returner - and one of the nation's best - in 1968 and 1969. That's right, folks. He stuffed the run on 1st and 2nd downs. Covered his zone, or a back out of the backfield on 3rd down. And on 4th down, he'd jog 40 yards deep and field the opponent's punt.

Then he'd take off. To put his return skills into proper perspective, here are Onkotz's senior season punt return stats against those of recent hero Derrick Williams' senior season:

Filling the role of Thomas Jefferson [the smart one] 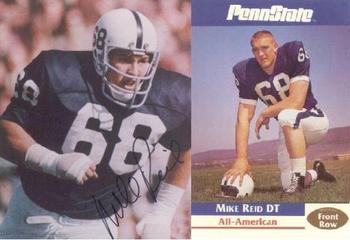 I've been to enough tailgates to know that I'd be shot by old-timers if I didn't include Mike Reid on Nittany Mountain of the 1960s. His name is mentioned in hushed, reverent tones between mouthfuls of BBQ, and stories about a couple of engineering students who rigged a pulley system to haul a keg of beer into the stands the night before games.

Mike Reid fills the Jefferson role because despite being a Top-10 NFL draft choice; and despite earning All-Pro honors early in his career (and 3 All-AFC awards); he retired after just 5 pro seasons to pursue his second career as a concert pianist, composer, and song-writer. [He had a #1 country hit in 1990, by the way].

The 68 and 69 teams lost exactly zero times. Like most favorite Penn State squads, the 1969 Lions were led by their defense, and Mike Reid was the leader of a side full of leaders. The 1969 team faced three ranked opponents: #16 Colorado, #17 West Virginia, and in the Orange Bowl, #6 Missouri - and allowed a grand total of 6 points (while tallying 57 for themselves). Yet the 1969 would not be crowned National Champions - testimony to why Richard Nixon is not, and never will be, on the real Mount Rushmore.

And finally, playing the role of George Washington [the natural] 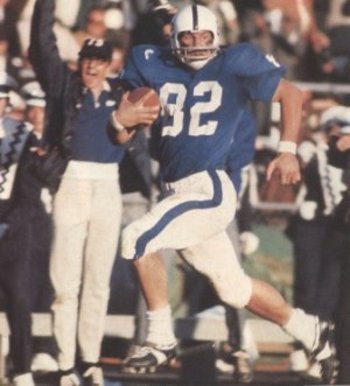 "He's what God had in mind when He created a football player." - Joe Paterno on Ted Kwalick.

Well, then. This nomination is confirmed.

Let's Go to the Video Tape

Watch all four (yes, ALL FOUR) of these nominees in action against Army in 1968: