Share All sharing options for: Only Stefen Wisniewski Until Penn State Football 2012 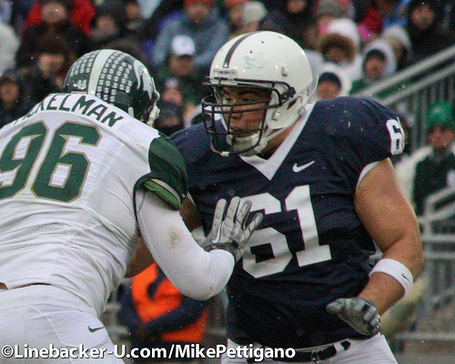 Wisniewski became the first Penn State Football student-athlete to be named an ESPN Academic All-American three times, having been a first team selection in 2008, 2009, and 2010.[1] He became Penn State's 95th first team All-American at the conclusion of the 2010 season. Prior to the 2011 NFL Draft, Wisniewski was regarded as one of the top centers prospects available.

Wisniewski was taken with the 48th overall pick in the second round of the 2011 NFL Draft by the Oakland Raiders, and signed with the Raiders shortly before the beginning of the 2011 training camp. Stating that he wished to create his own legacy, he declined to wear his uncle's old uniform #76 (which was available), opting for his college #61 instead. At the beginning of the 2011 season, coach Hue Jackson named Wisniewski the Raiders' starting left guard, the same position occupied by Steve Wisniewski. Wisniewski was named the Pepsi NFL Rookie of the Week for Week 3 of the 2011 NFL season, after the Oakland offensive line cleared the way for 234 rushing yards and allowing only one sack against the New York Jets. In January 2012, Wisniewski was named to the Pro Football Weekly All-Rookie team for his outstanding rookie season as starting left guard.