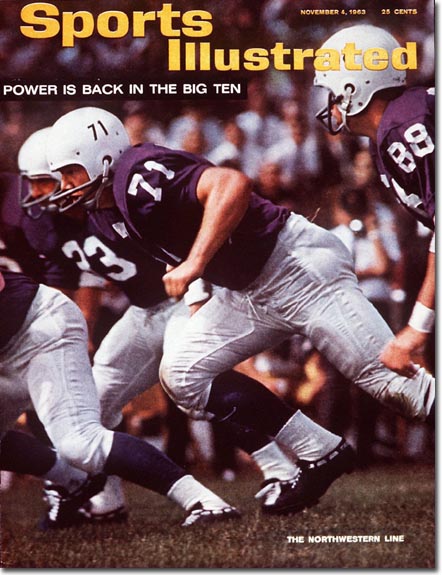 Can you believe it? Northwestern uniforms used to actually look good. And, Northwestern paired with the "Power Is Back in the Big Ten" byline? Telling. Oh, and the Big Ten actually having 10 teams? What a wacky, crazy world it was in 1963. Thank goodness we've progressed to calm, rational, reasonable 2012.

One thing hasn't changed from 1963 to present day: Northwestern still hasn't won a bowl game, a streak that actually began in 1949. Last year, 2011, was supposed to be the year the 'Cats broke the curse. They returned a ton of starters, particularly on the offensive side of the ball. Alas, Dan Persa was never fully healthy (or, Persa-strong, if you will), and the defense was an absolute sieve. Let's see if the 2012 'Cats will be Colter-strong.

The Past Few Seasons

Those sneaky Wildcats are a real pain. They rarely, if ever, field an athletic monster that dominates a game by himself. But they're disciplined, well coached, and rarely, if ever, beat themselves. In the modern Big Ten, that recipe usually gets you bowl eligible. And for Pat Fitzgerald, the 'Cats' head coach since Randy Walker's untimely passing in 2006, it's resulted in bowl eligibility in eight out of the last nine seasons. So it's not like they aren't trying to break the bowl win curse. They almost pulled it off in 2009, losing a heart breaker to Auburn in triple OT, in part because their kicker got injured. Now that's a curse.

In 2011, the 'Cats returned close to 20 starters and were a darkhorse for the Big Ten Legends division. They started strong, beating Boston College on the road in the season opener, and cruising past Eastern Illinois for a (2-0) start. But a 21-14 loss to Army - yes, Army - in which they allowed eleventy billion rushing yards (acutally, 75 carries for 381 yards) stomped the brakes on the season. They fought back in the next game, at Illinois, and jumped out to a 28 - 10 lead, before choking it away (this time, 21 completions for 391 yards passing allowed). That bummer led to three more consecutive losses (Michigan, Iowa, and yes, Penn State) before the 'Cats maturely took control of their season. They reeled off four straight wins to become bowl eligible, first beating Indiana, and then shocking Nebraska (there's always one) to start the recovery.

The offense loses Persa, Jeremy Ebert, superback Drake Dunsmore, LT Al Netter, and RG Ben Burkett, a 4-year starter. Oh - and their top 2 RB's from last year (by yards gained). However, they return Kain Colter. Kain Colter is the leading returning passer; the leading returning rusher; and the leading returning receiver. If he can play-action fake it to himself, go deep, and catch his own pass, the 'Cats could be deadly. Kidding aside, look for the RB spot to carry a bigger load this year, despite the position's losses, with the return of Mike Trumpy and Adonis Smith from injury. They also landed a transfer WR from USCw, former 5* recruit Kyle Prater, who should be eligible this season. He'll join Demetrius Fields and Tony Jones to form a solid, if unspectacular, receiving corps.

You'd think that, with an intense, aware, play-making former linebacker as your head coach that the defense would be a strength. You'd be wrong. It does, though, start up front. The D-Line simply wasn't very good last year against the rush, nor could they rush the passer consistently. And this season, they are less experienced, though they return DE Jack DiNardo (3 sacks).

Yet, the schedule is manageable. The Wildcats play seven home games this season, with four of the first five at home. Their non-conference opponents are @Syracuse, Vanderbilt, Boston College, and South Dakota. If, by some miracle, the 'Cats take three of those four contests, then they have only to win three Big Ten games to become bowl eligible for a ninth time in 10 seasons - unheard of in Evanston. When you have Minnesota and Indiana in that slate, you're halfway home. The bad news for the 'Cats? On October 6th, they're on the road to face the Nittany Lions. They won't be favored.