Too Much Information 2012: the Iowa Edition

Share All sharing options for: Too Much Information 2012: the Iowa Edition

Week seven of Penn State’s football schedule brings on an arch nemesis in the form of the University of Iowa. Before last season’s 13-3 redemption win by the Lions, Iowa was owning Penn State. To start their own streak the Nittany Lions will have to play a great game and it all starts with knowing your enemy because knowing is half the battle and knowing starts with Too Much Information: the Iowa edition. 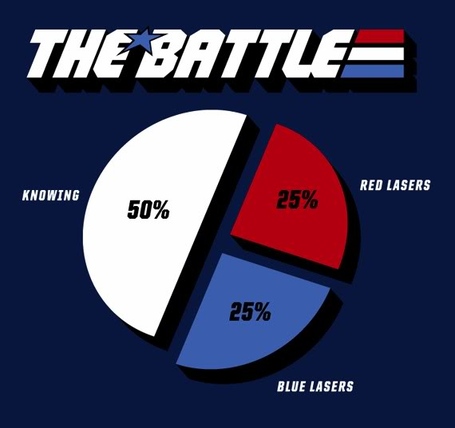 Knowing: half the battle; the other half is lasers

In September of 1855 the first students enrolled at Iowa.

Fun Fact: of the first class of 124 students, forty-one were women. Iowa became the first public university in the United States to admit men and women on an equal basis.

Other firsts achieved by the University of Iowa:

-Iowa was the first to use television in education in 1932.

-They were the world’s first university to accept creative work in theater, writing, music, and art on an equal basis with academic research.

-The university was the first state-university to officially recognize the Gay, Lesbian, Bisexual, Transgender, and Allied Union way back in 1970. [insert lowbrow joke here]

The university’s sports teams are named the Hawkeyes. The term "Hawkeye" originally appeared in the book The Last of the Mohicans and was later used in its plural form to describe the people of Iowa. The University of Iowa adopted this as the nickname for its athletic teams. The university mascot is Herky the Hawk. Herky was first drawn as a cartoon in 1948, and was first portrayed at a football game in 1959. Herky comes in two forms, Herky the football mascot… 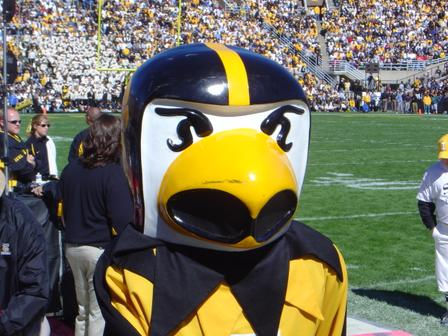 And Herky the other sports mascot… 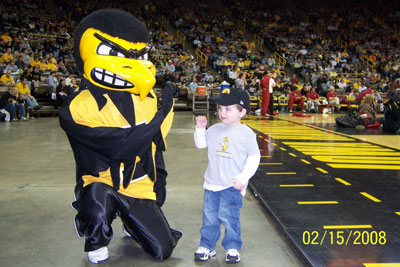 Football was officially recognized as a varsity sport on November 16, 1889, when the Hawkeyes played against and lost to Grinnell. Yeah, I don’t know who Grinnell is either. The Hawkeyes have won 11 Big Ten championships and have played in 26 post-season bowl games and have a 14–11–1 record in those bowls. The Hawkeyes’ lone claim to a national championship came after winning the Rose Bowl following the 1958 season. They all-time series with Penn State is tied at 12-12 and Iowa has won 8 of the last 10 meetings between the two schools. While football is the money maker, Wrestling is king at Iowa and I would be remiss not to mention it. 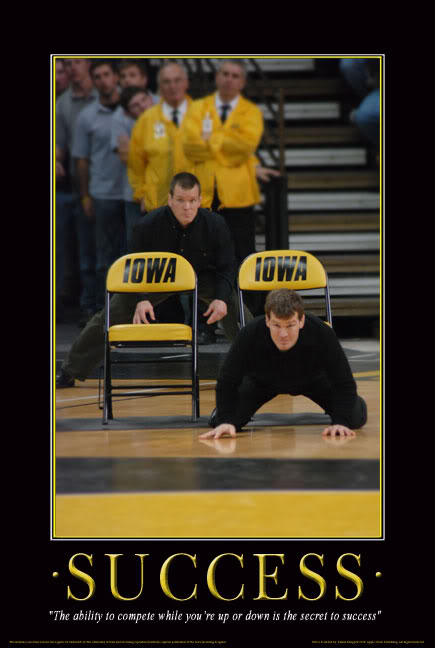 The Brands brothers: Iowa fans call them "intense" everyone else calls them f'ing nuts