Share All sharing options for: Tim Beckman: Angel of Emmert

When His Holiness, Lord Mark Emmert, smote us Penn Staters from on high, in his moral glory, for our collective sins against academia to the benefit of football victories, His Lordness proclaimed open season on our roster. Assured in His judgment of goodness and righteousness amongst his faithful followers, He released his coaching angels to rescue the tortured, yet athletic souls on Penn State's campus, who weighed in excess of 200lbs, but who could still run a 4.5 forty-yard dash.

One such angel, Tim Beckman, lately of rural meth-ridden southern Illinois, amongst the many corn fields, vowed to bear the burden of the mighty task laid upon him by His Righteousness, in His Glory. Yesterday, the Lord's angel Beckman appeared in Chicago, at Big Ten media days, to tell his heroic tale of rescue.

So great was the angel Beckman, so powerful his purpose, that His Righteousness, appeared to Beckman in the form of two Illinois athletic staffers, who told the story of Lord Emmert's intended rescue well in advance of His actual announcement.

"It was brought to our attention by two individuals prior to any sanctions being granted by the NCAA that an opportunity might present itself for a transfer."

All glory, honor and praise are yours, Tim Beckman. Clearly, you were chosen by His Lordship Emmert, for His work. While lowly Coach Bill O'Brien watched a television at 9am Eastern with the rest of the sports world, mighty Emmert, in His Righteousness, had appeared before you and told of the opportunity that could reveal itself unto you, in His mercy. Preacher Beckman gathered his followers to share the tale, and discussed strategies for rescuing the Penn State football squad from purgatory.

Maybe it wasn't the best story they've ever heard. Get off his holy back. So what if public speaking isn't his forte. Righteousness is. Being forthright and upfront is his forte. Smiting enemies with honor, courage, and accountability is his forte.

"I want to address the (Penn State) situation because I know it's going to be asked, so I'm going to attack it because I'm a proactive guy."

EXACTLY! We knew it, all along. THIS is why Lord Emmert, in His wisdom, chose His angel Tim Beckman for the advanced knowledge. This is a man of courage, conviction, honor, action, and appropriate moral and academic integrity, even if he sounds like a dumbass when speaking into a microphone. This is man we can trust.

"We did not go onto their campus. We only talked to individuals that were willing to meet with us. We did not go after them."

Umm. Wait...what? Weren't you personally dispatched, along with seven of your nine assistant coaches, by His Lordship Emmert to Penn State? You know - the rescue mission?

"We were in State College, but we did not go on campus."

Yes! Okay, then. That's totally different. And we see now what you meant earlier. We're with you now.

But...umm...one question: in your heroic tale, you mention that you did not 'go after them'. How did you announce your presence? Did Lord Emmert grant you psychic powers? Like telepathy, or something cool like that? Or maybe the football players could sense the positive disturbance in 'the force'? Can you choke someone out without even touching them? Are you a Jedi?

"We went to two establishments outside campus and called some individuals." 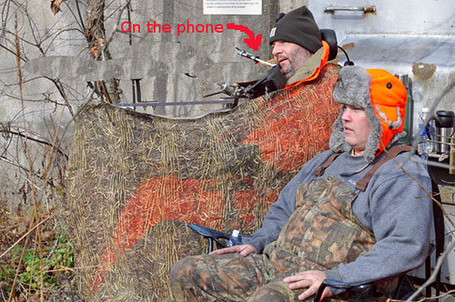 Huh. So I guess you're calling Adrian Amos and Stephen Morris liars.

We have chosen to stay at Penn State and opposing coaches are outside our apartment, was that the intention of the NCAA? #comeonman

We have chosen to stay at PSU & other opposing coaches are outside our apartment. Was that the intentions of the NCAA #LeaveUsAlone #WeAre

In fact, we at Black Shoe Diaries have obtained this EXCLUSIVE! photo of Tim Beckman recruiting Amos and Morris:

But anyway, Tim, we'll take you at your word. It was just, like, a regular old cell phone then? That's kinda disappointing. I thought there'd be cool shit like jumping out of airplanes and shooting bad guys. But whatever. I mean, Lord Emmert, I think, actually required you to notify Penn State of your rescue mission, if I remember correctly. And given your proactive, attacking nature, you probably took it head on and called Bill O'Brien directly. I mean, you have a pair, right?

"Great question.....of course this morning we met as head football coaches and athletic directors. I spoke with Coach O'Brien, but not in depth, about that situation."

Not in depth? Not attacking? Coach O'Brien - did you speak with Beckman about this?

That is an answer I can understand. See how he did that Tim? He didn't stumble, mumble, and use an extra 30 unnecessary words in an effort to pretend he's telling the truth.

I'm terribly disappointed, Tim. You're an Emmert angel. You're supposed to be the good guy. So - here's a shot at redemption. Here's a chance to come clean. Because you're acting really guilty. Do you have any regrets? Anything you'd change? Anything you'd apologize for?

"Not at all. We're just following the rules of the NCAA. We provided Penn State with the names of the people that [we'd go after] - prior to us even going there [which we didn't really do]. Our compliance coordinator, Ryan Squire, and Mike Thomas, our athletic director (faxed a secretary Penn State's own roster) that - so that they were aware of, before we got there [though we weren't going], of who those individuals might be [that we weren't going to go after]."

Well, then. Justice has been done. Mighty Emmert, in His magnificence, in His wisdom, hath loosed his righteous angels to save the day.