Not much out there, but here's some AAU practice clips.

While Moore might seem like a bit of a project judging from his low-profile and mid-major offer sheet, he did attend PSU's Advanced Skills camp at the end of June. The two-day camp gave the PSU coaches an opportunity to work with him through their own workouts, and obviously he performed adequately enough to earn an offer. The staff also observed him at the beginning of July at Reebok's Breakout Challenge, which was held at Chambers' alma mater, Philadelphia U. It couldn't have hurt that he came from the same AAU program as 2014 pledge, Isaiah Washington.

While Brandon Austin's decommitment was a pretty discouraging blow last weekend, the staff responded by securing the commitment of another Philadelphia prospect. Moore's late growth spurt (he reportedly grew 3 unexpected inches last summer) has aided his development as a versatile pick-and-pop big man. The staff has to feel comfortable with his low-post progression and he seems to be a late-bloomer. Seeing how PSU's chances have dwindled with elite big men prospects Schuyler Rimmer and Kyle Washington, Moore is a solid pickup. He is the fifth Pennsylvania native to pledge to Chambers. The staff still has two remaining scholarships available for the 2013 class. 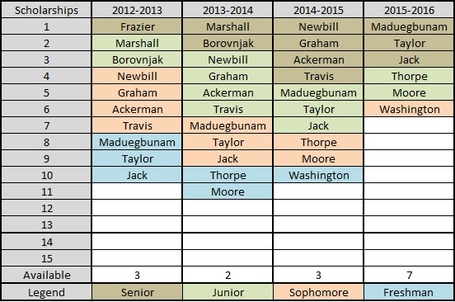