Too Much Information 2012: The THE Ohio State Edition

Share All sharing options for: Too Much Information 2012: The THE Ohio State Edition

The university that would later be known as Ohio State was established in 1870 by the Ohio General Assembly. When it opened OSU was known as the Ohio Agricultural and Mechanical College. Like most universities, OSU was a public school established under the Land-Grant Act signed by President Lincoln on July 2, 1862. Also, like most universities, there were two factions on the original Board of Trustees: the "narrow gauge" group that believed the university should only teach agriculture and mechanical arts and the "broad gauge" group who wanted a wider program that featured English and ancient and foreign languages.

Thanks to Joseph Sullivant, a member of the first Board of Trustees, the "broad gauge" idea was pushed through the Board of Trustees, where it passed by a margin of 8-7. Classes began on September 17, 1873 and in 1878 the college's name was changed to The Ohio State University. The first class of six men graduated that year and in 1879 the university graduated its first woman.

Ohio State has several well-known traditions that need to be covered starting with the "The" in their name. THE Ohio State University When the university was renamed in 1878 the Board of Trustee wrote in their minutes: "...the educational institution heretofore known as the 'Ohio Agricultural and Mechanical College,' shall be known and designated hereafter as 'The Ohio State University.'" Since "OSU" could mean Ohio State, Oregon State or Oklahoma State the university officially steered away from the "OSU" symbol in 1986, and instead adopted the original name including the "The" since it was originally designated as such. Now most Buckeyes will tell you that the "the" was placed in the name to distinguish OSU as the leader of Ohio universities both in size and in financial support from the legislature, but I believe it was just a grammatical gaffe that gets used as a point of arrogance. 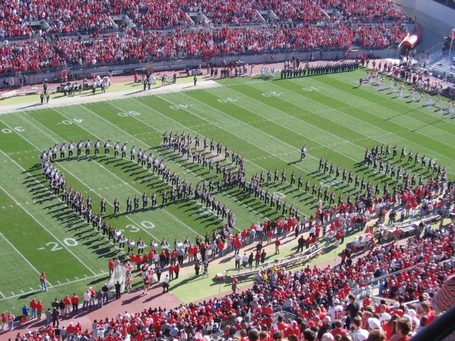 "Script Ohio" has been an Ohio State University tradition going on 73 years. Begun in 1936, "Script Ohio" includes a revolving block "O" at the beginning, the curved formation of the word "Ohio," and the "dotting of the I" by the sousaphone player. The funny thing is Ohio State didn't do the first Script Ohio, it was first seen in 1932 when the University of Michigan Marching Band took the field at Ohio Stadium. The Michigan Marching band formed the first Script Ohio with accompaniment of the O.S.U. marching song, "Fight the Team." Other Michigan band formations were "MICH," a block "O," and a block "M." Even though Michigan performed the first Script Ohio, Ohioans will tell you that the script is only "one piece" of an overall "event" that is signified by the name and the OSU band are the rightful creators of "Script Ohio." I call bullshit.

The Ohio State university marching band is also known as The Best Damn Band in the Land (are we seeing a pattern here?). It's one of the few all-brass and percussion bands in the country, the largest of its type in the world. Because Military training was an early part of the curriculum at Ohio State, a military band was formed for the cadets to drill to. The first appearance of the OSU marching band was in 1896 and grew over the years, from 100 members in 1920 to 225 members today. Many people prefer the all-brass composition over traditional marching bands and it does lend itself to college fight songs but I prefer the color and depth of a band with woodwinds (ok, sue me I'm a sax player).

Not only are the sports teams of OSU called buckeyes but more broadly the residents of the state of Ohio were known as buckeyes for a very long time. A buckeye is a tree, native to Ohio and particularly prevalent in the Ohio River Valley, whose shiny dark brown nuts with lighter tan patches resemble the eye of a deer. Settlers who crossed the Alleghenies found it to be the only unfamiliar tree in the forest. The trees and their nuts are of little practical use: the wood does not burn well, the bark has an unpleasant odor, and the bitter nut meat is mildly toxic. It grows where others cannot, is difficult to kill, and adapts to its circumstances. So basically the Buckeye is a giant, stinking weed. The university's Athletic Council officially adopted the term in 1950, but most records indicate that it had probably been used with some frequency to refer to Ohio State and its athletic teams since before the turn of the century.

In 1965 student Ray Bourhis, along with other members of the student organization Ohio Staters Inc., convinced the OSU athletic council of the idea of a Buckeye as Ohio State's mascot. At the time many other schools used animals as mascots and had live ones present at games. Bourhis thought a buck deer was fitting for Ohio but having a live buck at a game was virtually impossible. Instead he chose a buckeye to serve as the Ohio State mascot. The buckeye was later named Brutus in an all-campus naming contest and began his career as a large fiberglass shell that weighed 40 pounds. 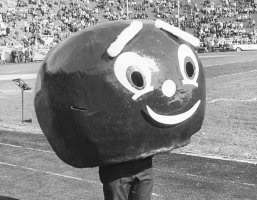 Ohio State joined the Big Ten in 1912 leaving the Ohio Athletic Conference. Before last season's actual Big Ten championship game, OSU won 35 Big Ten Championships including, at least a share of, 6 in a row. The Buckeyes played their first game on May 3, 1890, at Delaware, Ohio, against Ohio Wesleyan University which they won. The first game against the University of Michigan, in Ann Arbor, was a 34-0 loss in 1897, a year that saw the low point in Buckeye football history with a 1–7–1 record. The game against Michigan has been the last game of the season since 1935.

Ohio State has had 7 Heisman trophy winners, played in 43 bowls with a record of 20-23-0 and won 7 national championships, 5 of which came under legendary coach Woody Hayes. Since 1914 129 Buckeyes have been named first team All-Americans.

Before he was throwing chairs at refs, Bobby Knight was a Buckeye. George Steinbrenner graduated from OSU. Patricia Heaton of Everybody Loves Raymond fame was a Buckeye. Jean Peters who was Miss Ohio State University, an actress, and second wife of Howard Hughes had an Ohio State degree.

Chris Wedge, who directed computer animation films including Ice Age and Robots was a Buckeye. As always every school has a rat in the woodpile and Ohio State is no different, serial killer Jeffrey Dahmer attended but did not graduate. Not sure if the NCAA is going to investigate whether or not Ohio State could have done more to stop Dahmer.