Share All sharing options for: Nittany Mountain: The 1970s 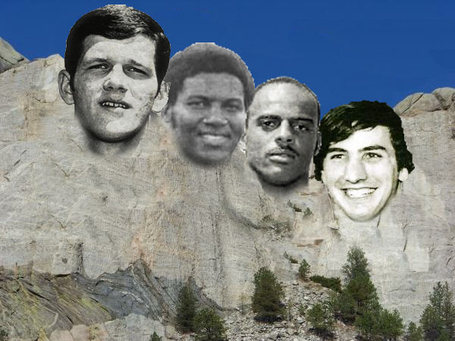 We're moving right along for our "Mt. Rushmores" of Penn State football--Nittany Mountain. Today it's the letdown decade following the wild '60s, though it was hardly a letdown for Penn State on the gridiron.

The 1970s were the winningest 10 years for the Nittany Lions, finishing the decade with a 96-22 record, one undefeated season (1973), nine AP top 25 finishes, a 5-4 bowl record, and even the program's only Heisman Trophy winner in John Cappelletti.

When one considers that Penn State was still only a new kid on the block of "powerhouse" programs, combating bias way more sharp than later decades, the 1970s was a decade of remarkably consistent excellence on the field. Even the 1980s, with its two national titles, saw Penn State fall on its face twice with two non-bowl years and its first outright losing season under Joe Paterno.

So who made the shortlist of contenders for our Nittany Mountain of the 1970s?

We were debating whether Ham should have been in the 1960s category or this one. Since the 60's had so many of its own great players, and Ham graduated in 1970, his home was here. Did we leave anyone off this list? Yes, it's kind of too late now, but we definitely want to know who you would add on, and why.

Linebackers strive to be like Jack Ham. Much of his national notoriety came after his days as a Nittany Lion, but it's difficult to argue the impact Ham had on the Penn State football program right through to today.

An All-American in 1970, Ham became the 10th Nittany Lion to be enshrined in the National Football Foundation College Football Hall of Fame when he was inducted in 1990. Ham is the only Penn State product in both the college and professional football halls of fame. A nine-time All-Pro linebacker for the National Football League Pittsburgh Steelers, Ham was enshrined at Canton in 1988. As a senior co-captain in 1970, Ham had 91 tackles and intercepted four passes. He still shares a pair of defensive records for blocked punts: four in his career, three in his final season. He had 251 career tackles (143 solo). A second-round draft choice of the Steelers in 1971, Ham developed into one of the NFL's most outstanding linebackers. He starred on all four of the Steelers' Super Bowl championship teams and was the Defensive Player-of-the-Year in 1975.

Clark is one of those guys who comes along every few years that grows into the heart of his team. For his final two seasons in Happy Valley, he was one of, if not the leader of the team. Clark was easily the most decorated of the players. Though, as was the case for every Nittany Lion on those teams, his career was marked by one of the darkest moments on the field for Penn State football.

Selected by the Associated Press, The Football News, Football Writers, Football Coaches, and United Press International in 1978 and by The Football News, Football Writers, The Sporting News, Football Coaches, NEA, Walter Camp, and United Press International in 1979. In 1978, Clark had 51 tackles, including 21 for losses. He had four quarterback sacks and three fumbles recovered in winning the Lombardi Award as the nation's outstanding lineman/linebacker. In 1979, he missed the end of the season with a knee injury, but managed 40 tackles (seven for losses), three quarterback sacks and three fumbles recovered. He played with New Orleans (1983-88) and Kansas City (1989) of the National Football League after spending several years in the Canadian Football League.

Curt Warner, DJ Dozier, Blair Thomas, Ki-Jana Carter, Curtis Enis, Larry Johnson, Tony Hunt, Evan Royster... heck, even the guy we talk about in the next section, Penn State's only Heisman winner, can't hold water to the career and single-season production Lydell Mitchell can boast of during his time as a Nittany Lion.

Penn State's season and career touchdowns record-holder, Mitchell was inducted into the National Football Foundation College Football Hall of Fame on December 7, 2004. A product of Salem, N.J., Mitchell was a standout running back from 1969-71, helping the Nittany Lions to a 29-4 record. He earned first-team All-America accolades and finished fifth in Heisman Trophy balloting in 1971 after breaking three NCAA season records -- most touchdowns (29), most rushing TDs (26) and points scored (174). Mitchell ran for 1,567 yards in 1971, a school season record that stood for more than 30 years. He still holds Penn State records for touchdowns in a season (29), TDs in a career (41) and rushing TDs in a career (38) and his 246 career points scored rank fourth. Mitchell played in the National Football League with Baltimore (1972-77), San Diego (1978-79) and the Los Angeles Rams (1980).

Before the "busts" running backs Penn State became (rightfully so or not) known to produce in the 1980s and 1990s, it was John Cappelletti who set the bar at the highest it ever was for Nittany Lion ball carriers. Lenny Moore, Charlie Pittman, Lydell Mitchell and Franco Harris were all part of Penn State's ascent to being known as a juggernaut for producing excellent tailbacks, but it was Cappelletti's Heisman-winning senior season that stamped "PSU" onto the map.

The 1973 Heisman Trophy winner, Cappelletti helped the Nittany Lions to a perfect 12-0 season and No. 5 national ranking in both of the major polls. A consensus All-American, Cappelletti rushed for 1,522 yards and 17 touchdowns in 1973. The Upper Darby, Pa., native put together three straight 200-yard rushing games in the final month of the season, including a high of 220 against North Carolina State. Cappelletti also received the Maxwell Trophy and was selected as Player-of-the-Year by ABC-TV, United Press International, the Philadelphia Sports Writers Association, the Walter Camp Foundation and the Washington Touchdown Club. He played in the Hula and Senior bowl games. Cappelletti's career yardage total of 2,639 still ranks him No. 9 on the Lions' all-time rushing list. His 1973 rushing total is fourth on the school season rushing list to Larry Johnson (2,087), Lydell Mitchell (1,567) and Ki- Jana Carter (1,539). Cappelletti still holds a number of Penn State ground-gaining records. A firstround draft choice of the National Football League Los Angeles Rams, Cappelletti played 10 seasons in the professional ranks, six in Los Angeles and four with the San Diego Chargers. Cappelletti was inducted into the National Football Foundation College Football Hall of Fame on December 7, 1993.