Share All sharing options for: Sanctioned: the Roster Impact

Ooooh, we're afraid to cheer with you, bscaff. We might lose. We got sanctioned, and it isn't fair. Our feelings have been hurt by the ham-handed Board of Trustees. Hot Rod Erickson doesn't look or act anything like Roddy Piper. We're shocked that the NCAA could be so inconsistent, callous and hypocritical. We thought they were the bastion of integrity, representing 100 different wholesome values through the pageantry of amateur athletics.

Forgive my Blutarskian rant. Touchy-feely emotions aside, Penn State was sanctioned and it behooves us fans to analyze the grisly details. Besides, nothing is a better antidote for depression than some good, cold, emotionless math. We've read how these sanctions are 'worse than the death penalty' (warning: Wetzel link), and how somewhere near half of the roster will be 'walk-ons'. So we'll break it all down after the jump. But in case you don't have the time to join us there, I'll give you the conclusion now: Penn State will continue to win, on and off the field, this year and in the years to come. We have tiger lion blood.

Before we discuss how Bill O'Brien might manage his way through the sanctions to victory, let's layout the current roster and the penalties to set the case facts.

Given these case facts, we can forecast what Bill O'Brien will be dealing with from a roster standpoint moving forward. The table below begins with the end of the 2011 season, and uses some basic addition and subtraction to fit the roster within the sanctions. 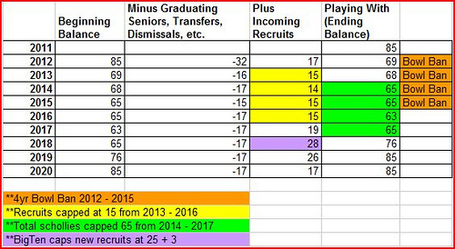 Let's cover the doom and gloom first, and get it all out of the way.

So let's cry it all out now. Give a good scream or yell. Flip your computer monitor the finger. [pauses....still pausing...]. All better? Okay. Here's the 'good' news to this - it's not as bad as it sounds. Not at all.

First, unless you're in the SEC, almost no one ever enters a season with a full, 85-man, we-recruited-these-guys roster. Ever. Michigan, in Brady Hoke's first season (thanks RichRod!), was operating quite a bit below a full 85-man cohort. Another example, though it pains me to write it: USCw is pre-season #1 with a 75-scholarship team, at the end of their sanctions. So let's take the pistol out of our mouths calm down.

Every team has dismissals, be they for academics or otherwise. Every team has transfers. The minute that Bill O'Brien dismissed Shawn Oakman, he was operating with less than 85 scholarships (if he wasn't already). And those 3 or 4 unexpected losses typically become 1-year awards to the former walk-on who has bled and sweated while paying his own way. So while the limit is 85, a more realistic, non-SEC squad is around 80 - 83, before redshirts, of course.

Second, every football team from pee-wee through the NFL has (scholarship) players that are just going through the motions. It is a virtual guarantee that the anti-recruiting-starz crowd can name at least 5 big-time recruits on any roster who appear to have all the athleticism in the world, but struggle to make the (74-man) travel squad. And that's not to blame those kids. There are a world of excuses for being distracted and going through the motions. The takeaway, here, is simply that '85' does not equal 85. It's more like 70 - 75.

So, have you backed away from the ledge yet? Most (non-SEC) schools can not maximize those 85 scholarships, so the practical impact of our sanctions is some amount less than 20 scholarships. And, given that Penn State has a strong tradition in its preferred walk-on program (McGloin, Zug, Norworod, Hull, just to name a few), and has the means to subsidize student expenses through a host of non-athletic scholarships, Bill O'Brien can minimize the impact of the sanctions by mining under-recruited talent and developing it.

This is not going to be Chernobyl. So long as Bill O'Brien gets 'his' players through the regular athletic scholarship route, and is able to improve upon PSU's historical walk-on success (both of which he's already doing), the missing scholarship bodies will mostly be....the extra bodies that (practically) every team has.

Of course, those extra bodies can come in handy, particularly if the injury bug levels giant swaths of your roster. But managing a roster with fewer spots isn't an unknown world for Bill O'Brien. In fact, he's more accustomed to running practice with 60 guys getting reps than he is 105 guys getting reps. Consider the positional breakdown of rosters in the table below. At many positions, the 65-limit that is imposed - and, even a full 105-man roster - will actually be 'business as usual' for Coach O'Brien.

Clearly, a 65-scholarship roster is not terribly different than an NFL roster, if managed well. The biggest disparity, besides some additional skill position depth and development, falls with the numbers we're used to seeing from Penn State on the offensive and defensive lines. In the NFL, a team might have 19 total O- and D-lineman; the 2008 PSU squad had about that many for each side.

But, for once, our less-than-optimally managed roster may pay some dividends. When Bill O'Brien took the reins earlier this year, he entered Spring practice with 17 offensive linemen, plus two more in the incoming recruiting class. After this summer's free agency period, he still has 17 left; and only 3 of those are seniors. So GM Bill O'Brien inherited a bit of an advantage in this area. He also has a similar advantage on the D-line, where just six of the 19 D-linemen in camp are seniors or juniors. Penn State is well stocked at the toughest positions to fill throughout the bulk of the sanctions.

With respect to positions like LB/TE/FB, or WR/DB, where scholarship numbers will necessarily be down - I'd expect Bill O'Brien to preach and practice position flexibility. This is particularly true considering he just finished his graduate work under the creator of the concept himself, Bill Belichick. Can you sack the quarterback and catch a TD pass in the Super Bowl, Mike Vrable? Can you be a lead blocker in goaline, and stuff the run on defense Vince Wilfork? And Tedy Bruschi - can you play the run, the pass, rush the passer, captain the special teams, and run the locker room?

One last pep talk point about all of this, and it might be the most critical: we have every indication that Bill O'Brien and his entire staff are going to be scheme diverse, in order to maximize the talent of the players on their roster. It's what he did at Georgia Tech, running different sets for Heisman contender Joe Hamilton than for George Godsey - two very different players. And it's what he did in New England, when he had Randy Moss and no tight ends three seasons ago, versus three tight ends and no Randy Moss last season. He's the polar opposite of Rich Rod (sorry, Rich), who released his NFL QB (Ryan Mallet) so he could run a spread option featuring Nick Sheridan. And, lest we blast Ted Roof too hard, keep in mind that his multiple front, stunting, disguised, blitz-heavy scheme is a pretty good choice when you don't have individual studs that allow you to line up in the same set for nearly every play and still dominate.

Yes, the penalties are going to hurt - that's exactly why they're termed punitive. But Penn State isn't going to turn into a Division II school. Not by a long shot. Recruiting won't fall off the map either. Ask yourself this question: if you're a recruit, would you be influenced positively by the fact that you're going to get more practice reps from a coaching staff that's fresh from the pros, and be damn near assured of getting to see the field - early and often - so long as you stay healthy and eligible? And oh by the way - there were 12 - 14 NFL scouts at practice last week. Oh - one more: if you did get injured? You're taken care of by the guy that spent the last 12 years of his career helping Urlacher, Briggs, Cutler and Forte recover from their injuries. So that's kinda nice. Ooops - damn, one last thing: if you don't make the NFL, you're left with a world-class education and access to the world's largest network of graduates who have a robust love for Penn State.

Penn State is going to win, and continue winning. And graduating. And succeeding, on and off the field of play. Sure, we could resort to conventional weapons against the NCAA, but that would take years and cost millions of lives. No, no. This situation calls for a retrenched, resounding, barbaric tidal wave of blue kool-aid fandom that the Hair Helmet can feel in Indianapolis. The drunken Philly Santa Claus ain't seen nothing, amirite?