Too Much Information: the Nebraska Edition

Share All sharing options for: Too Much Information: the Nebraska Edition

The Big Ten welcomed a new member last season and Penn State welcomes a worthy opponent on the schedule in week 10 when the Lions travel to Lincoln to face Nebraska. We're still learning what the Cornhuskers are all about but do we know enough? We will thanks to Too Much Information: the Nebraska edition. Sure you know the athletic teams of Nebraska are nicknamed the "Cornhuskers" but did you know they were also called the "Hawkeyes" at one point? (Suck on that Iowa!) No? Well you do now and you will know way more information than you need to after reading on, thanks to TMI.

As is the case with most universities Nebraska gets its start thanks to the Morrill Act making it a land-grant university just like PSU. The university was chartered by the legislature in 1869 two years after Nebraska's statehood into the United States. (-ed note: way to be a whore Nebraska! You become a state and start plopping out universities? Disgusting.) The university's full name is the University of Nebraska–Lincoln and is commonly referred to as UNL or NU. By 1873, the University of Nebraska had offered its first two degrees to its first graduating class. The school remained small and suffered from a lack of funds until about 20 years after its founding. From 1890 to 1895 enrollment rose from 384 to about 1,500. A law school and a graduate school were also created, making it the first school west of the Mississippi to establish a graduate school. By 1897, the school was 15th in the nation in total enrollment. In 1913-14, a fierce debate ensued over whether to keep the University in downtown Lincoln or to move it out of town. The issue was not resolved until a statewide referendum sided with staying put. After purchasing property downtown, the school experienced a building boom, both on the new property and on the farming campus. The school would not experience another boom until the late 1940s, when a flood of returning soldiers from war forced the school to expand do to the increase in enrollment.

Like I said, the athletic teams of the University of Nebraska are officially known as the Cornhuskers. But early on they were also known by a plethora of other names. They were the "Hawkeyes" the "Antelopes" the "Old Gold Knights", the "Bugeaters", the "Rattlesnake Boys" and the "Mankilling Mastodons" (by far my favorite). In 1892, Nebraska adopted Scarlet and Cream as its colors and accepted the Bugeaters as its most popular nickname. The nickname was derived from the insect-devouring bull bats that hovered over the plains. What's a Bull Bat you ask, why it's a bird better known as a Common Nighthawk. 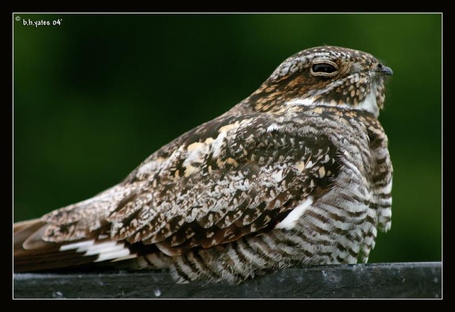 After a disappointing season in 1899, sportswriter Charles S. (Cy) Sherman, tired of referring to Nebraska with such an unpleasant moniker, began using Cornhuskers and it stuck.

The Cornhuskers have two official mascots. Herbie Husker is the oldest current mascot and was created by Lubbock, Texas, artist Dirk West and first appeared on the cover of the Husker's media guide in 1974. Soon after, he became the university's official mascot. Of course Nebraska has this abomination: 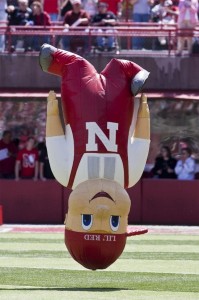 That's Lil' Red which, believe it or not, was the product of state wide contest run by athletic director Dr. Barbara Hibner in 1993. Lil' (I'll refer to him as Lil' from this point forward; gives him more street cred) was the WINNING entry. Yeah, I know what you are thinking: what did the losing ideas look like?

Lil' and Herbie enter the stadium before the team at the beginning of home games on a tandem bike. By the power of the interwebs, here's what that looks like. 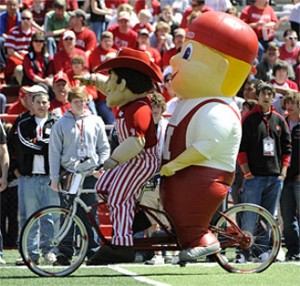 Isn't it strange that "Lil" is bigger than Herbie? Kinda doesn't make sense.

The Husker football team began competitive play in 1890, with a 10–0 victory over the Omaha YMCA on Thanksgiving Day, and has claimed 46 conference championships and five national championships.

The Husker defense is known by the nickname of the "Blackshirts." This nickname originated in the early 1960s and continued as a reference to the black practice jerseys worn by first-string defensive players. This tradition developed when head coach Bob Devaney had Mike Corgan, one of his assistant coaches, find contrastive jerseys to offset the red jerseys worn by the offense in practice. Further credit is given to George Kelly, Devaney's defensive line coach, who frequently referred to the top defensive unit by the name; eventually the rest of the coaching staff caught on. The first mention of the Blackshirts in print was not until 1969.

Nebraska has an interesting mix of Alumni. Johnny Carson was a Husker.

Billionaire and one of the wealthiest men in the world, Warren Buffett considered himself a Bugeater.

Ted Hustead graduated from Nebraska. Who is that you might ask? He's the creator of mega-super tourist trap Wall Drug in Wall South Dakota. Trust me there's two things to see in South Dakota, the Bad Lands and Wall Drug.

Nate Branch of Harlem Globetrotters fame was a Cornhusker. Probably the most famous players to graduate from NU were Roger Craig, Johnny Rodgers, Mike Rozier, and Irving Fryar and, of course, former Nebraska coaching legend Tom Osborne was a Mankilling Mastodon.