Share All sharing options for: Men's Basketball Recruiting Big Board 8.24.12

With the July evaluation period in the books, now's the time many hoops prospects really focus on their college recruitment. Lists are trimmed, visits are planned, and decisions are made. The November signing period is less than three months away, and many players would rather finish their recruitment before their senior season.

The critical 2013 recruiting class will be Pat Chambers' first with a full calendar year of recruiting. The 2012 class was limited since his late hire occurred long after some prospects' recruitments were well along in the process. It's expected this class will have four members, two of which are already committed. These young men will be the next group to further lay a new foundation within the program. Their arrival will make the definitive shift on the roster from 'Ed's guys' to 'Pat's guys'.

Geno Thorpe was the first to pull the trigger, just a few days after the Grand Jury report came out back in November 2011. An ankle sprain limited Geno's July performance this summer, but there's nothing to suggest he isn't the solid 3-star combo guard that chose PSU over Wisconsin, Pittsburgh, Seton Hall, and Kansas State. He will be spending his senior season in Florida at West Oaks Academy instead of his native Pittsburgh, PA, citing his desire to live with his father as the reason.

After Brandon Austin came and went, the second commitment was Julian Moore, who jumped on board following a July offer. Moore attended Chambers' Elite Camp at the end of June, then came back for another visit that sealed the deal. The 6'9" big man underwent a late growth spurt that has put him behind physically, but the staff is confident he can develop inside and be a big contributor. He chose PSU over Temple, VCU, Duquesne, La Salle, Boston U, and Bucknell. 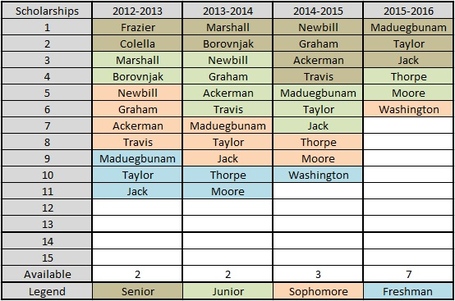 There's good depth in the frontcourt already for 2013-2014, so expect PSU to fill out their class with a point guard and a wing.

If PSU was able to lure one of Singer, Brown, or Hart, that would be a significant recruiting victory. They've been recruiting Hart the longest of this bunch and have made their way into his final seven schools. He has said nothing but great things about campus and the coaching staff, but PSU is up against tough competition for the Top100 wing. Josh Brown will be deciding on Monday. He did visit PSU, but I wouldn't feel great about the chances he comes to State College. Singer is still in the process of narrowing his options down and taking visits. Penn State was one of the first schools to get on him after his performance in the Spring period.

Kamall Richards hails from the same AAU program that PSU commits Moore and Isaiah Washington play for. He originally is from the Poconos and blew up this summer with We R-1. Marquette, Nebraska, and Mississippi State are also involved with his recruitment. Scotty Tyler was unknown until he performed so well at PSU's camp that he was offered the day after. He seems to be a good shooter for his size, but the Wisconsin native is under the radar. Boston College has been mentioned with his recruitment.