Matt McGloin reads the signals from the sideline, checks his wristband, enters the huddle, and calls a play (or, sometimes, two plays). He gives the snap count and breaks the huddle.

The up-tempo (allegro?) pace from Bill O'Brien's offense isn't just to hassle the crap out of the defense; it's also to give the quarterback a few extra ticks of the clock to decipher what's in front of him. And he's working to figure out quite a handful of things.

As the huddle breaks, McGloin's eyes first go to the play clock. Last season, the offense often broke the huddle with 8 - 10 seconds remaining - just enough time to get set and snap the ball, when they weren't getting flagged for delay of game. This season, with the faster tempo, we should see that number double to 16 - 20(+) seconds.

While he's walking to the line, McGloin is taking his first read of the defensive front. Some will tell you that he should be looking for the safeties - and he will. But the more efficient route, typically, is to get a sense of the hogs up front. The big boys aren't wandering around 10 yards out of position, yelling to a cornerback like safeties are, as the offense comes to the line. Large fat men learn quickly to move more efficiently than that.

For you and me in the stands or on the couch, reading a front is as simple as counting the number of down linemen (3 or 4) and the number of linebackers (2, 3, or 4). We don't care or take much notice of the alignment of the defensive end and defensive tackle, nor do we give much of a crap about whether the linebackers are stacked, over or under.

McGloin (and Stank) doesn't get that luxury (nor does he get to take a swig from a bottle with one hand down his pants, ala Al Bundy). He has to recognize the intricacies of the front because: 1) each front has strengths/weaknesses/tendencies; 2) fronts are directly related to coverages; 3) fronts give an indication to possible pressure (blitzes); and 4) the QB's responsible in this offense for getting out of the original play call if it's a bad fit against those strengths/weaknesses/tendencies/pressures. Of course, those things are all base-level knowledge that the QB must know cold. The weekly opponent breakdown of tendencies and tips is in addition to all of that.

Here are a few examples of some of the base-level diagnosis that McGloin (and Stank) will be analyzing in the seconds before the snap. (Quick note: if you ask 10 coaches to name a formation you might get eight different answers. Maybe one coach doesn't like the connotation of 'weakside', so he decides to call it 'fritz' after his assistant coach from Brooklyn asks about ordering a pizza. The nomenclature/picture that follows is borrowed from former Maryland coach Ralph Friedgen, circa 2000 - 2003 - when, for a spell, a guy named Bill O'Brien was his RB coach). 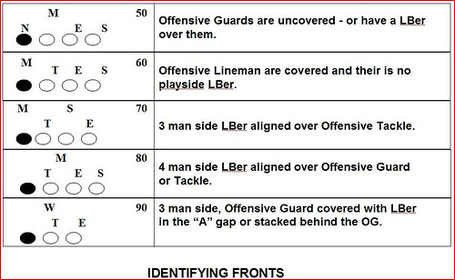 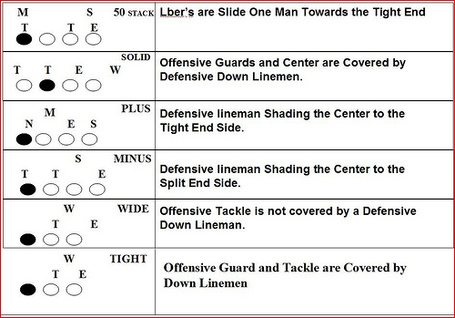 McGloin might have 16 seconds as he leaves the huddle, but he can't blow all 16 seconds diagnosing the front. He next needs to locate both safeties. He might look up the free (weak) safety first. For much of the last decade, you could usually find Penn State's free safety 10 - 15 yards deep, and smack between the hashes in the center of the field. Such a pre-snap orientation gave our free safety a head start on roaming his coverage responsibility - the deep middle third of the field (i.e., the middle guy in the "Cover-3", or three deep secondary defenders). In a "2-deep" look, McGloin might find both the free and strong (hero) safeties 10 - 15 yards deep, with each hanging out near a hash. Those two each have responsibility for a half of the field, deep.

He also needs to locate the strong safety. Is the strong safety 'in the box' to the TE side? Is he weakside, staring down a running back? Is he casually - maybe too casually - making his way towards the line of scrimmage behind the defensive end? Are his eyes burning holes through my helmet, or is he focused on something else?

McGloin also has to take a look at the corners. Are they pressing his wideouts at the line, or are they playing off? Are they focused on the receiver in front of them, or are they peeking inside at the QB? What's their leverage in relation to the receiver - inside, outside, or straight up? How does that leverage effect his receiver's release off the line, and thus, the receiver's timing? Coaches have language for all of these pre-snap secondary alignments as well. This time we borrow from Coach Bill Belichick, circa 2003 New England Patriots. 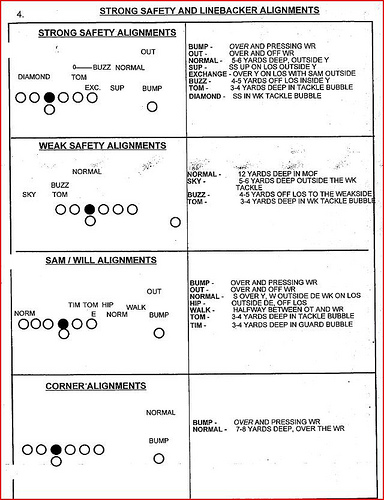 Of course, as with diagnosing fronts, McGloin's job is harder than the armchair quarterback's. He doesn't get away with just counting DB's (3, 4, 5, or 6) and locating them on the field. There are 20+ different coverages that he must diagnose in a portion of that 16 seconds. And, some defensive coordinators do their level best to disguise the coverage to confuse the QB's diagnosis. Nick Saban - another Belichick disciple - earned a reputation for shifting his front and/or coverage a second or two before the snap. It made such an impression on Penn State that last season, PSU changed their cadence to bait the defense into showing their hand before they actually snapped the b---[whistle, flag, delay of game].

One of McGloin's responsibilities through reading the front and coverage is to determine which defender(s) are covering the flat - the area from the offensive tackle to the sideline, extending 10 yards from the line of scrimmage - to both the playside and backside. Based on the information he processes, he needs to recognize whether it's a corner, a safety, a linebacker, or - occasionally - a defensive end. It's important for him to get this down correctly and consistently for myriad reasons: 1) almost every route combination has a receiver in the flat, either playside or backside, so a fair amount of passes end up targeting this area; 2) it's also a common 'outlet', if he gets unexpected pressure; 3) if you 'know' who is covering the flat, you have a leg up on the rest of the coverage. For example, if the cornerback is staying shallow to cover the flat, then it's probably a 2- or rotated-3-deep look - with a honey hole behind that shallow corner and in front of either a 2-deep safety on the hash or a rotated 3-deep safety booking it for the back third. But again, that's just one very simple example. Here, courtesy of Coach Belichick, is a sampling of the base coverages (with variants) that McGloin will have in his head:

Is it Organic Chemistry? No - but it also isn't STAT100 (nor do chem majors have 300lb men trying to break them in half). After McGloin's casually read the front and coverage, and considered changing into another play, he still has a few other questions to consider in those precious 16 seconds: am I working motion pre-snap? And, is everybody aligned correctly? What's the play clock at now? What are my progressions? What was the snap count again? Shit - what in the hell was the play call?

The quarterback must be one smart dude in Bill O'Brien's offense. And those smarts have to come quickly. In six days we - Penn State cultists and 3 million other TV viewers - get to see how well Matt McGloin's assimilated all of this stuff after 30 - 40 practices. We're all pulling for you, Matt.