What we've heard for the last 40 years at press conferences is something along the lines of the following: [Team X] is a good, tough, smaht football team. They're a veteran team. Their RB is really a good, tough runner. They have some excellent athletes at [Position X]. If we don't play our best game, they're gonna lick us.

Bill O'Brien's version is a bit longer, and a bit more detailed. And it doesn't use the words 'lick' or 'kick our ears in'. But other than that, it's pretty close:

BILL O'BRIEN: Well, this is an excellent football team. This is Coach Solich's eighth year in the program, and this is probably his best football team. This is a team that was in the MAC championship game last year and has huge aspirations for this year.
Offensively it starts with their quarterback. This guy is an excellent athlete, Tyler Tettleton. He can run, he can throw, he's definitely a dual‑threat guy, and he just poses a lot of problems. He's definitely somebody that we have to do the best we can to contain.
They've got four or five receivers that we think are all very, very good players. They've got a tight end corps that we're going to have to do a good job of keeping track of, and they've got two running backs there that have a chance to have a really good year for them. Offensively they're a very, very dangerous team.
Defensively they're very well coached, they're tough, they're sound. They've got a lot of returning players back there on the defense. They do a lot of different things. They don't just line up and give you the same look two plays in a row. So we're going to have to be on top of our game and try to string some plays together and do the best we can on Saturday.

The familiar is comforting. Fits like your favorite old t-shirt, doesn't it?

Bill O'Brien came out in costume and delivered a few lines from a Saturday Night Live sketch to start the presser. He received stunned silence and confused looks.

Ladies and gentlemen of the media, I'm just an unfrozen caveman coach. Your world of media-speak frightens and confuses me. The large media trucks with satellites make me want to get out of my BMW...and, run for the hills....or somewhere. Sometimes when I get a email I wonder, 'did little demons get inside and type it?' I don't know! My primitive mind can't grasp these concepts.

No - he didn't really present his version of "Cirroc, Unfrozen Caveman Lawyer Coach". But how cool would that have been, amirite? What was sorta new about this presser was the use of player names. At best, we might have gotten a "Clark", or "young Suhey" out of Joe. It was more usually just a number or position. And freshmen mostly didn't exist. Bill O'Brien appears to be pretty good with names:

Q. You've spoken several times about Allen Robinson making good progress. How about the rest of the receiving corps? Are there a couple of guys that have really made a lot of progress, and how do you feel about that group?
BILL O'BRIEN: Yeah, Allen has definitely had a really good camp, but there's a bunch of guys there that have played well, starting with Alex Kenney and Evan Lewis. Both of those guys will play for us. They'll play outside. They'll play inside. Both of those guys have really improved over the course of training camp. Shawney Kersey was injured for a little bit during camp, came back the other day, and he looks to be a guy that has really improved since spring practice, and we're really happy to have him there, too.
We've got some other guys there that have played in the past in Christian Kuntz and Matt Zanellato and Brandon Moseby‑Felder, so we've got some guys there that are role players for us that will also see time, and then we've got freshmen that have come in and looked good in Geno Lewis and Trevor Williams. So we think we've got about six to eight guys there that can all help us, and they've all improved over the course. It's not an easy offense to learn as a receiver, especially a young receiver or a new receiver because there's a lot of different elements to route running and blitz breakoffs and things that go on.
I think these guys have made big strides, and I look forward to watching them play on Saturday.

A little playful jab at the wisenheimer reporters never hurt anyone. They think they know everything. Nobody did it better than Joe, but Bill's got potential. He's got the natural ability to become one of the all-time greats.

Q. You were talking about how you're going to keep your routine for Saturday morning and everything before game times. Like the night before games are you going over last‑minute stuff or are you trying to relax? What do you do the night before?
BILL O'BRIEN: Yeah, I thought I'd relax, go play nine holes over at Toftrees.

Pressers are generally boring affairs filled with coach-speak. So let's brighten it up by going off-script with a fun-tastic little pic, in honor of Fooge. To be fair to Fooge, ESPN bloggers Rittenberg and Bennett give off a pretty heavy I-heart-Disney-teen-stars vibe, too. Is that 12-year old, 4'2" Selena Gomez in the bottom left? Hard to believe that 3 out of 4 of these precocious young celebs will end up hooked on meth or heroin, isn't it? 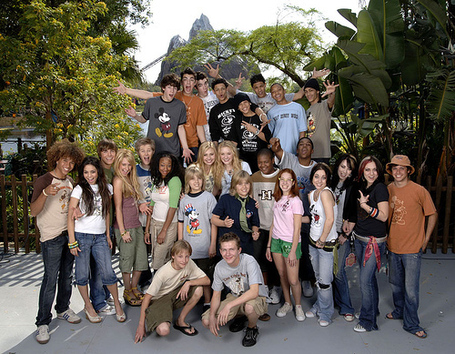