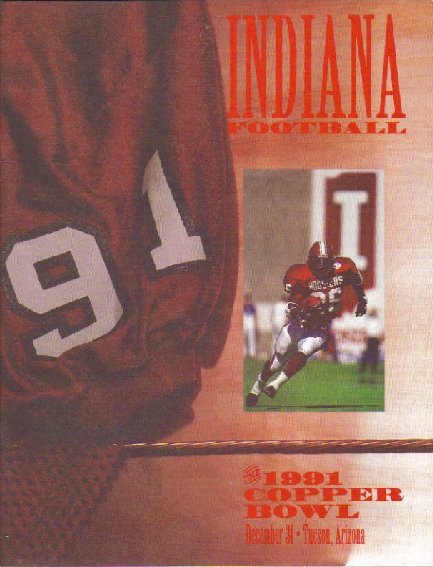 Quick, when was the last time the Indiana Hoosiers football team won a bowl game? Wow! That's correct. It was indeed the 1991 Copper Bowl, in which they defeated the Baylor Bears 24-0. Yes! It was in Tucson, Arizona! Obviously you're a true Hoosiers fanatic. I can see this will likely be the most scrutinized column on this blog in the last nine months.

You--the Indiana Hoosier faithful--are a masochistic, self-flagellant soul. Good Lord, dude. Indiana's football coaching deity is....(all together now): Bill Mallory. Wizened Bill Mallory found a way to guide the Hoosiers to six bowls in the eight seasons between 1986 and 1993. He brought names like Trent Green and Anthony Thompson to town. But, since Coach Mallory, you've watched Cam "Cam" Cameron and Gerry DiNardo. You had a brief, but unfortunate glimmer from the deceased Coach Hep, Terry Hoeppner. And, finally, you watched Bill Lynch put a rock in your stadium to take up the empty seats, while that magical sixth win stayed just out of reach. In fact, you've been to a bowl one time - one stinking time - since 1993, when Coach Hep's memory helped get you to the 2007 Insight Bowl. One freaking bowl game in 19 years. And you weren't handed unprecendented sanctions.

The Past Few Seasons

Let's stick to last year. Too many "last few" seasons could put you on suicide watch. So what happened last year? You dumped lifelong Hoosier Bill Lynch, and replaced him with former Tar Heel Center and Northwestern Offensive Coordinator and Oklahoma Offensive Coordinator Kevin Wilson. The word on Wilson was that he could be difficult to deal with, and didn't possess the most social qualities, but that he knew how to coach an offense.

Well, that turned out to be about half right. I don't blame him for it, though. He apparently was the only one who cared that he was coaching Indiana football. Two of his first hires, including his OC, left before fall camp began. Soon after, many of the football squad followed - 16 players left the team (and 6 more left early on Senior Day).

The Hoosiers started horribly, with disappointing losses to Ball State, Virginia, and North freakin' Texas. They played Penn State close, losing by just six points - and had a chance at a Hail Mary at the end of the game. But that was to be their high water mark, as they followed that performance with losses by - get this - 21, 52, 21, 21, 14, 52, and 8, en route to a 1-11 season. Sweet baby Jesus.

Indiana stunk on offense last year. Kevin Wilson wants to throw the ball, but he didn't have a reliable passer (where have you gone, Ben Chappell?). This year, he's hoping to get more out of true sophomore Tre Roberson. Roberson showed some skill last year, especially for a true frosh. But for Wilson's scheme to work, Roberson has to become a more efficient passer.

On defense, Indiana stunk last year. They allowed 244 rushing yards per game, and tallied just 18 sacks. However, three of four starters in the trenches return, including All-Big Ten honorable mention DL Adam Replogle (SR). Replogle is a solid senior leader who can make some plays. He snagged 4 sacks, 3 TFL and 1 qb hurry last season as one of the lone playmakers on the defense, from his DT position (though he's probably better suited at DE).

He better be outstanding this year, as the linebackers will be mostly new. The Hoosiers lose leading tackler MLB Jeff Thomas and 4th leading tackler LB Brandon McGee. But they'll be covered by a more experienced back end, which returns eight - that's 8 - defensive backs with starting experience.

Thumb In The Wind

What's one more losing season, amirite? Kevin Wilson played 600 freshmen last year, and brought in 250 junior college transfers to replace the 300 players who left. They return enough players at key spots to show improvement this season. But it'll take another year of Coach Wilson's program to earn that bowl bid: 4 - 8.