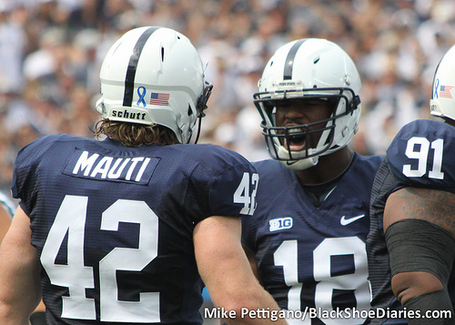 Welcome to the BSD Film Room. In this edition we'll take a look at Penn State's 3rd down defense, focusing on Virginia's game winning touchdown drive, in which the Hoos converted 4 of 4 third downs.

Third down has been difficult for our Lions, particularly in the second half. And, of course, that means fans are gathering pitch forks and torches, before marching towards Ted Roof's home. It's an understandable position - after a decade spent mostly in the top 10 defensively, watching opponents convert seemingly at will on 3rd down in the second half is....well, frustrating. And, perhaps worst of all, Ted is a Graham Spanier doppleganger.

Let's fire up the PC (no one uses film, anymore) to see if we should continue gathering torches, or, just maybe, give Ted a bit more of a chance.

Penn State began the 4th quarter with a touchdown and a field goal to go up 16 - 10. With 10:50 remaining in the game, Virginia put QB Mike Rocco back in the game (damn), with a 1st and 10 at the UVa 25. Rocco scrambled away from pressure on 1st down, gaining 3 yards. But on 2nd down Ted Roof dialed up a "B" gap blitz from inside backer Mike Hull. DT Anthony Zettle beat the guard in front of him with a sweet arm-over to the inside, and Hull came through the line cleanly, where Zettle began, for the sack and an 8-yard loss. On 3rd and 15, Ted called for a soft zone. Rocco checked down to Perry Jones, who couldn't come up with the poorly thrown pass. And Penn State got off the field on 3rd down. It would, though, be the last time in this game.

Penn State got the ball in great field position, but went 3-and-out after McGloin and Kersey couldn't connect on a slant on 3rd and 4. Butterworth got off his best punt of the day, and Mauti flew down the field for a tackle immediately after the Virginia punt returner fielded the ball. UVa took possession at their own 14 yard line, down 6 points, with 8:03 left in the game.

On 1st down Perry Jones took the ball off tackle for a gain of 6. But on 2nd and 4, Ted Roof slanted the defensive line on the snap and dialed up a corner blitz. Freshman DE Deion Barnes beat the uber-hyped Virginia RT like a drum, inside. Barnes (and the corner) flushed Rocco from the pocket, and caught him from behind for a loss of 1 yard. Pretty sweet.

Virginia faced 3rd and 5, and came out with 4 wide and RB Perry Jones in the backfield. Penn State countered with a 4-man front, and tight man coverage across the board (below). Morris is at the top of the screen in press man. Amos is at the bottom of the screen. S Jake Fagnano is the 3rd corner, matched up on the receiver in the slot at the top of the screen. And LB Hodges is pointing out his 'man', who is motioning across the formation. S Obeng is your lone deep safety, and LB Hull and S Willis, each with yellow dots, are the 2 remaining defenders. One of them will have Jones out of the backfield. 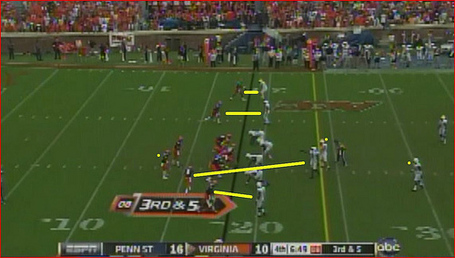 At the snap (below), Rocco has already made up his mind. He confirms the tight man coverage, and will be turning to RB Jones out of the backfield. Jones, by virtue of starting in the backfield, is the only receiver without a defender in his face. 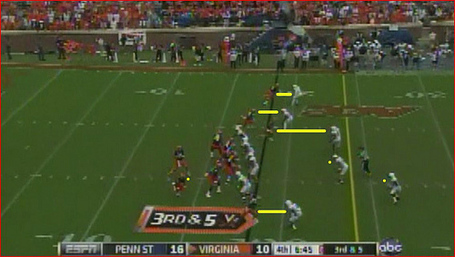 The coverage is great across the board - except for Jones. Rocco has already released the ball before Jones can get back to the original line of scrimmage (black line). Hull and Willis each have about 10 - 12 yards to close - Hull from inside leverage, and Willis from outside. But they get there 3 yards too late, as Jones picks up 8 for the first down. 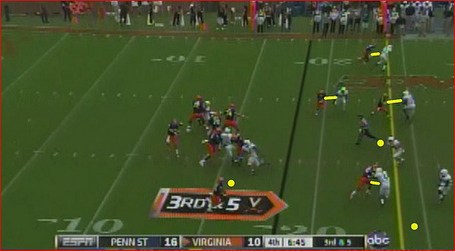 That conversion got the ball from the UVa 14 to the UVa 27. And there are just 6 minutes remaining. On 1st and 10, Ted Roof blitzed but Virginia had a flanker screen called. Morris made a great play and stopped it for a gain of just 4. On 2nd and 6, Roof called a 4-3 Stack. DE Stanley read the Virginia run, beat the blockers to the point of attack and crushed RB Perry Jones for a 5 yard loss. Another sweet play made. Facing 3rd and 11, Virginia called timeout, came back to the line, and false started. So UVa was left with 3rd and 16 from their own 21 yard line, with the game in the balance.

Virginia again came out with 4 wides, and RB Jones in the backfield. Ted Roof again had a 4-man front, but played a deep, soft zone on the back end. The secondary defenders are dotted yellow (plus Obeng-Agyapong in centerfield, who I missed dotting). With this defense, Roof conceded the dump off, knowing that if it was completed, chances are that UVa would still be facing a 4th and long. 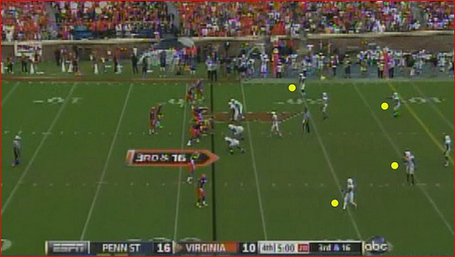 But the best laid plans of mice and men....The PSU front four got pressure and forced Rocco to scramble to his left. Rocco gathered himself briefly, and launched a prayer deep just before getting creamed. The linebackers carried deep, and have the underneath routes (dotted below). But the route combination in this play is to flood the shallow zone while leaking one receiver deep. Safeties know this offensive technique as baiting the trap with cheese. The offense wants the safety to get googly-eyed over the receivers in front of him, while another sneaks behind him. 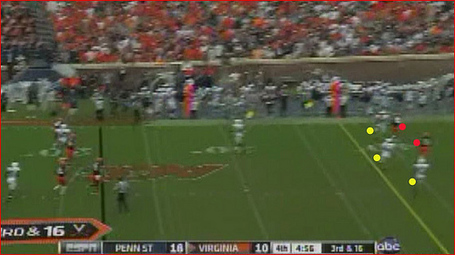 And unfortunately, S Fagnano took the cheese. He got caught focusing on the receivers in front of him, while some tight end named McGee hauls in the ball 44 yards down field. DB Coach John Butler was not pleased that a coverage designed specifically to prevent the deep ball, uh, allowed the deep ball. 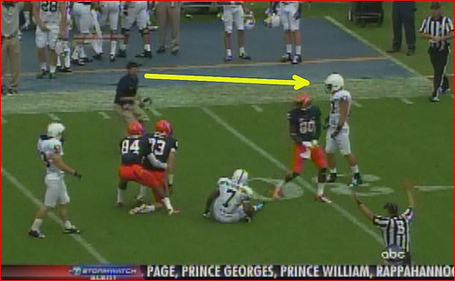 With new life, and a first down at the Penn State 34-yard line and 4:40 left in the game, Virginia handed the ball to Jones who got about 3 yards. On 2nd and 7, Ted Roof called a 3-4. Virginia chose to run again, but Mauti stopped the off tackle try for 0 yards - and UVa (finally) was flagged for holding. Replaying 2nd down (and now 16, from the PSU 41), Ted Roof switched to a 4-2 Nickle. Our nickle-back defender is.....Gerald Hodges. Hodges is basically playing the role of Hero Drew Astorino, covering the short zone. Rocco hits a slant and Hodges makes the tackle after a gain of 8 yards. So you know what that means....3rd down (again) and 8 yards to go for the 'Hoos.

Ted Roof dials up another 3-4 front with a Cover-2 shell. Hodges is positioned as an OLB, and Hull is showing blitz from his inside backer position. The secondary is definitely in zone coverage, with Morris focused on the quarterback as he backpedals away from the line of scrimmage. 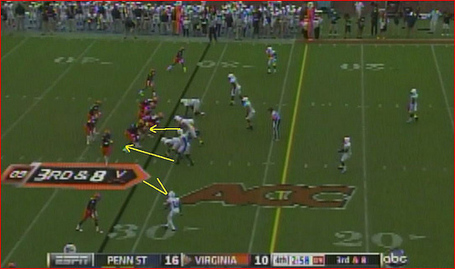 Ted Roof, having been burned trying to play a deep zone with no blitz on the previous 3rd down, calls for 5-man pressure this time. Hodges comes off the edge completely unchecked. But as you can tell from the red arrows, Virginia has called another flanker screen. 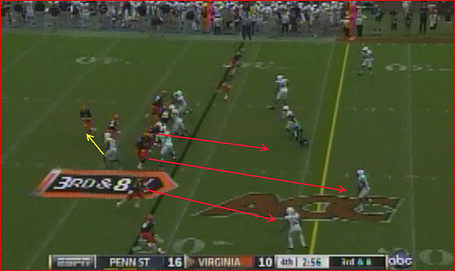 Rocco just gets the ball away before Hodges drills him. Morris, Obeng and Mauti are the three Penn State defenders closing in. From the shot below, you wouldn't think that this play would get UVa all the way to the Penn State 6-yard line. In fact, earlier in this same series (bolded above), Roof blitzed into a flanker screen, and Morris made a great play to stop it for just 4 yards. But Virginia executes better this time. The screen receiver also does a great job of run-after-catch. And the Hoos have first and goal. 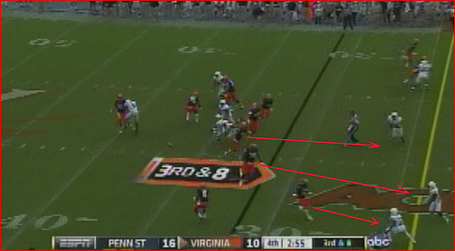 After first and goal, Virginia finally scored on....of course....a 3rd down completion to that bastard TE McGee, with his big stupid smiling face. And we all know the rest of the story.

So where does that leave us?

Perhaps no coordinator in the history of football has been set up for more criticism than Ted Roof. He's replacing a beloved Tom Bradley, who's soft cover-3 suddenly warms the cockles of every fan's heart. But Roof has just 4 returning starters on defense. He also inherited a roster that contained a grand total of 3 cornerbacks - none of whom played significant snaps in the past. Outsized expectations? Yes, Roof has those in spades. And sadly, as previously noted, he looks exactly like Graham Spanier. These are not keys to a successful transition. Now, with 2 losses, his defense is allowing opponents to convert 10,000% of third downs in the fourth quarter (or, at least it feels that way). Two years removed from a MNC or not - Ted is going to be criticized.

But breaking down UVa's final drive - and the third downs in particular - I don't find much fault for Ted. In fact, I rather enjoyed the multiple looks, the early down blitzes, the sacks, and the tackle for loss. Players make plays - and, from my perspective, Roof put his players in position to make plays on 3rd down, including the final UVa drive. We just couldn't make them.

No one ever wants to read it, but this is a very young, very inexperienced team. Hull and Willis couldn't close on Jones - in their 2nd and 4th games. Fagnano took the cheese on 3rd and 16 - in his second game playing safety. And Morris and Obeng couldn't quite make the play on 3rd and 8 - in their 4th and 2nd games, respectively. I'm not willing to blame Ted Roof for that. More game experience, and more practice in Ted's multiply aggressive scheme, and we'll see those 3rd down conversions decrease. In the meantime, let's put back the pitch forks and torches, and give this staff and this squad some time. Because, from what I see, I really like both.