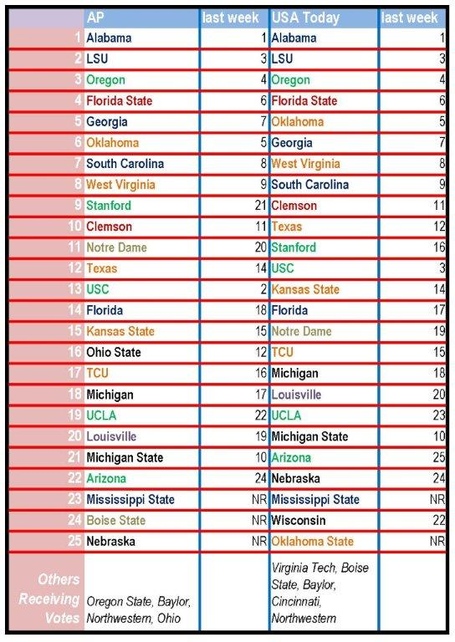 Apparently being tops in the Big Ten is a precarious position to be in, as Michigan State found out on Saturday night versus Notre Dame. Likewise, USC was unable to overcome their Cardinal woes, and Matt Barkley looks to leave the Trojan program never having beat Stanford.

Alabama is the clear number one in the nation, and the Crimson Tide and LSU look to remain numbers one and two until their showdown on the first Saturday in November. With USC's loss, Oregon moves up to number three in both polls, and Stanford jumped up quite considerably.

Florida State's beatdown of Wake Forest moves them up, and Oklahoma, Georgia, South Carolina, Clemson, and West Virginia round out the top ten in both polls, with Stanford and Texas taking the last spots in each poll.

The SEC has six teams still ranked, three in each division, despite Tennessee' drop from the rankings after their loss to Florida. The PAC 12 has the same five teams in the rankings, but their orders are distinctly different after the reshuffling near the top this week.

Rounding out the teams without a BCS affiliation are Notre Dame, who jumped to 11 and 15 with their win over Michigan State, and Boise State, who makes a repeat appearance in the AP poll.

The most unsurprising news in this week's polls is the drop of Virginia Tech from #13 in both last week, to out of the polls completely; that's what a loss to a previously 0-2 Pitt team will get you. This isn't a new occurence for the Hokies, who have been highly ranked for many seasons in a row, only to have an inexplicable loss by the first week of October that drops them out of national contention.