A beat reporter once asked Bill Parcells why he drafted mostly college graduates. Did Bill favor smarts over athleticism? Parcells was in a cantankerous mood, so he answered "Look - you get punched in the mouth 4 or 5 times, all that stuff starts to even out."

What's that have to do with blitz pickup? Almost nothing, except that it's my second favorite Parcells quote, behind only "you don't have to hit me in the face with a skunk for me to know it stinks." But the reason for mentioning Parcells was another coaching moment of his. In training camp with the Dallas Cowboys, he's beating the hell out of his lineman, running backs and tight ends during blitz pickup drills. The defense is giving the offense every look under the sun, and frequently getting to the quarterback. The offense looks discouraged, and Parcells is caught telling the offense, "you get this down and you'll be praying they blitz you." Too bad he had Quincy Carter at QB.

But the old coach is still right about that. If your offense can handle the blitz, you can get chunk plays that win the game. With Temple next up on Penn State's schedule, it would behoove Bill O'Brien and the offense to get their blitz pickups down. Last year, Temple blitzed, stunted, twisted, slanted - they did something funky defensively on almost every snap. And as we profiled previously, Penn State rarely beat it.

Now, Bill O'Brien has all the fancy, shiny protections you can shake a stick at. This 2012 squad is truly running a lot of the same offense that was used in last year's Super Bowl. But - (there's always a but) - the players have to know it, and execute it. Otherwise, you're left praying they don't blitz you. Let's kill the lights and see how the squad's been doing.

Let's pick up action in the second quarter. In the shot below, Penn State's at the Navy 40 yard line, 1st and 10. [side note: last year, I could see the personnel in the huddle and tell you what the formation would be. A back would be in the backfield. A tight end would be where you expect to find a tight end. Not this year - at all. That's really cool as a fan, and really frustrating as a play charter. But I digress....] We have "21" personnel (2 backs, 1 tight end) in an old school I formation, with the tight end in a "half", or slot alignment, off the line. Navy is in their base 34, shifted toward the tight end side.

Thanks to the miracle of DVR, I can tell you that Navy will be blitzing six defenders. You can tell which ones by the pointy yellow arrows. But first - remember this spring when, in the first sneak peeks at Bill O'Brien practices, we saw the quarterbacks and center pointing out the "Mike" linebacker? Here's where it all comes into play. Identifying the "Mike" linebacker is, basically, telling the offensive line that "52" (or whatever his number might be) is your responsibility should he come on a blitz. The "Mike" is the O-line's 5th man to block (again, if he comes). The other four are typically down linemen. But in Navy's 34 front, you only have 3 certified hand-in-the-dirt down linemen. The fourth down lineman is dictated by the alignment of the other three. In the shot below - and it's pretty hard to tell but it's all we got - the defense's left DE is almost heads up on our RG Urschel, leaving RT Gress uncovered; while, on the opposite side, the defense's right DE is heads up on LT Farrell, leaving our LG Dieffenbach uncovered. So....as part of C Stank's line calls, LT Farrell gets the down DE, and RT Gress gets the standup OLB. The O-line's 5 responsibilities sport a red dot in the pic below. That leaves, of course, the right OLB unblocked (by the O-line) if he blitzes. And he does. 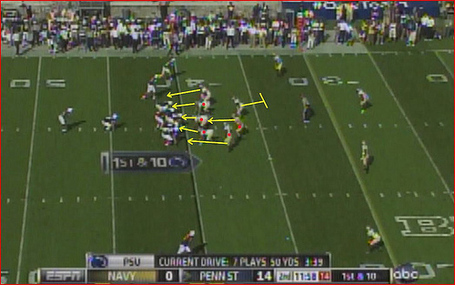 The two running backs, Zordich and Dukes, have to know which 5 defenders the O-line are taking. Then they have to identify, from the inside to outside, where the blitz threats are, and if they are coming. In the shot below, every man does his job - I think. Zordich fires left to pick up the unblocked OLB. Dukes I would have expected to go opposite of Zordich because there was no play action here, but what the hell. I can't say that he's wrong for going left with Z. 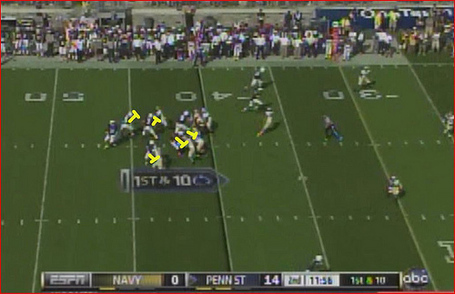 But the coolest part of this play, in my opinion, is the work of our 3 interior O-linemen. C Stank had a nose tackle in his face at the snap. RG Urschel had a DE (almost) heads up. And, Navy's left ILB was looping/twisting on an "B" gap (between the guard and tackle) blitz with the DE. With the still shot below, you can tell that it got picked up. McGloin is clean, and he got to step up in the pocket and launch one deep. But the still shot doesn't do justice for Stank, Dieffenbach and Urschel. Stank passed the NT to Dieffenbach. Urschel hit the DE, passed him to Stank, and changed direction in time to get the looper - the ILB - pushing him wide. We have a couple of 300-lb ballerinas in the middle of our line. 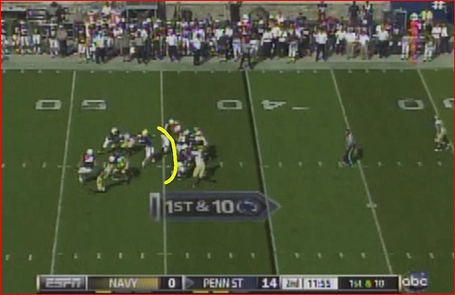 It's beautiful when it works, like it did above. The defense can send whatever they want, and you can handle it - and, hopefully, punish them. But handling it requires everyone to be on the same page, know their assignments, and execute them. And it gets ugly when those things don't happen.

In the shot below, we're looking at 2nd and Goal. Dukes is the lone RB in the backfield. Navy is bringing a 5-man pressure. Based on the front alignment, the offensive line will be taking the 3 down linemen, the OLB over the slot, and one of the ILB's (though neither blitz). 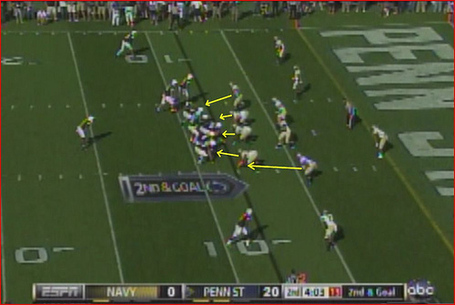 One of the techniques that Bill O'Brien and O-line coach Mac McWhorter employed was a 'cross-block', or the ol' switch-eroo, with the guard and tackle. In the shot below, LT Farrell blocks down on the DE aligned over LG Mangiro, while Mangiro kick steps back and left to pick up the on-rushing OLB sitting on Farrell's outside shoulder. But Dukes has a big job as well. He needs to read, from inside out, and take care of any blitzer that's not a responsibility of the o-line. I drew Dukes with 3 options below, but he really only has two: a) the ILB that isn't the 'Mike', if he's coming; and if he isn't coming, then b) the OLB at the bottom of the shot. 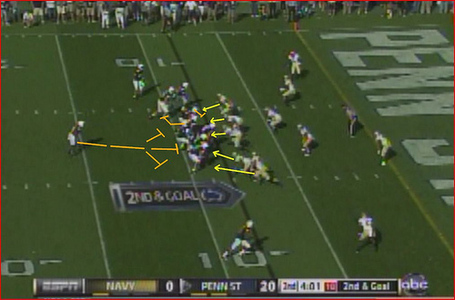 This play is filed under 'The Bad' for a reason. LG Mangiro picks up the OLB, but runs into Dukes, loses leverage, and holds the OLB as he cuts the corner. Dukes goes left instead of right, leaving Navy's other OLB with a free path to tattoo McGloin. McGloin spins out of it, rolls right and throws the ball out of the back of the end zone. 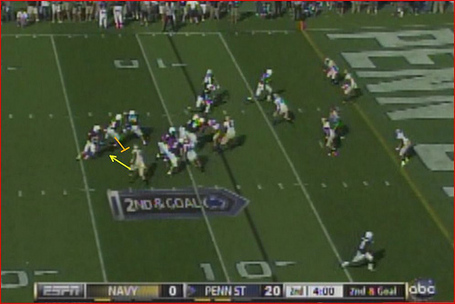 Bill O'Brien loves play action. I love Bill O'Brien for loving play action. The play below is one we saw during the Blue-White game. Back then, we diagrammed it with Rob Bolden ignoring the underneath receiver and throwing a deep interception to Adrian Amos, who was playing safety. This time it results in a sack because of 'ooops'.

At the snap, LG Mangiro will pull to his right. The right side of the offensive line will down block, and RB Dukes will take the fake and smash into the line. Navy brings 5-man pressure as diagrammed. 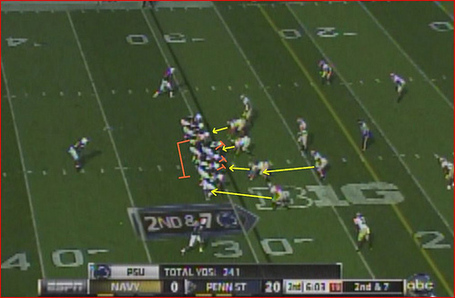 McGloin extends his arm, selling the play fake in the shot below. LG Mangiro is moving across the formation with a head of steam. And TE James is going to take the on-coming ILB. Yes, I drew him with a left-right option below. But he doesn't really have one - he's got to take the ILB, the inside threat, and leave the OLB for Mangiro. 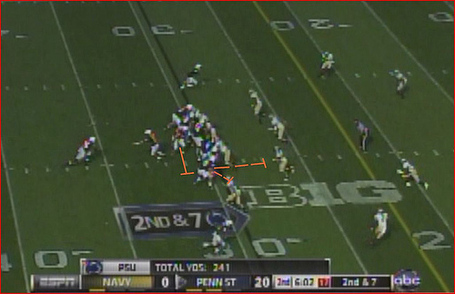 And that's what James does, locking up the ILB below. Mangiro is is great shape to pick up the OLB. 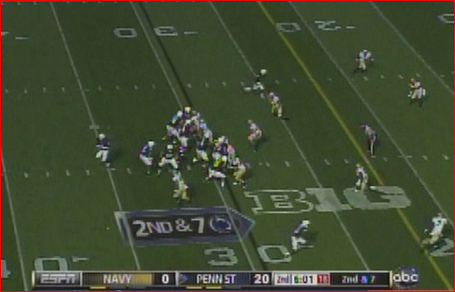 But, woof. Mangiro doesn't see the OLB until it's too late. How'd he miss seeing him? Angelo probably can't explain it either. On replay you can see Mangiro whipping his head around left and right, looking for somebody - anybody - to hit. And he just didn't see the OLB. McGloin gets sacked. 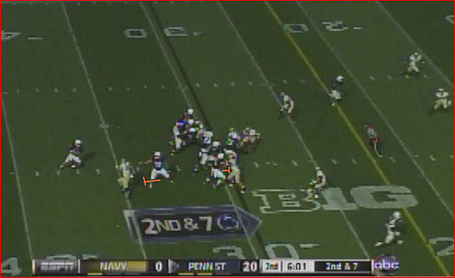 Bad blitz pickups plagued the first half - really, the first 3 games - and they ruined the drive right before halftime that I think BO'B saw as the nail in Navy's coffin. So by the third quarter, after a halftime to stew about it and get more pissed off, BO'B decided he'd give MGloin all the time he needed with a max protection.

Max protection, in a football rarity, means exactly what it sounds like: we're keeping everyone in to block, while just two guys go out in a pattern to catch the ball. In the shot below, Penn State lines up with one back, two tight ends - and the two tight ends are where you expect to find tight ends. Your lone back? Mike Zordich. Captain Caveman, the Zord-stache. He probably had a mustache when he was six. 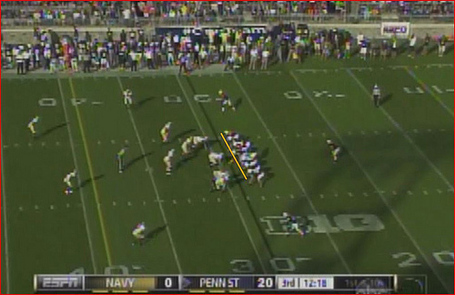 In the shot below, McGloin makes his play fake to Zordich. The linebackers are sucked in, along with the strong safety. 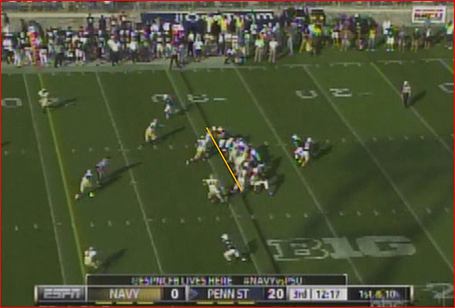 And McGloin finishes his drop with no one - and I mean no one - within five yards of his feet. McGloin took the 'easy' money on this one, though. He took the 14-yard curl route from BMF instead of the deep ball. It was underthrown but catchable - just like it was at UVa last week. And just like last week, BMF tried to cradle it, but the ball touched the ground and was ruled incomplete (this week, without having to be overturned by replay). 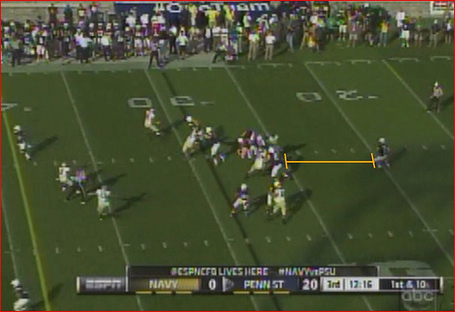 If I'm a Penn State player I'm excited. I'm getting practice and game reps with a big boy, straight-from-the-pros playbook. We're making line calls, identifying blitzers, and working every trick in the offensive playbook to buy our quarterback time. If I'm a left tackle and my pass sets stink against speed, Bill O'Brien lets me down block and switches a guard out there for a better angle. We're using play action to screw with the defense and let me get a good punch on them, instead of them just pinning their ears back. Why any offensive player wouldn't choose to play for this guy is beyond me.

On the downside, we're not very consistent at it yet. We have a lot to clean up - running backs especially. After the third game, it's pretty clear that - outside of Zordich - our backs don't have a perfect grasp on their responsibilities in pass protection. It's complicated, and it's all brand new to these guys. So, that's not surprising at this stage. In fact, if you believe Bill Parcells, it actually would be shocking only if they did have it down. Man, did Parcells hate rookie running backs.

[quick note: this is a new column. If you have ideas for making it better, and/or questions about things you've noticed or wondered about, stick 'em in the comments and we'll try to incorporate them.]