Share All sharing options for: Oh, Hello: Gus The Mule 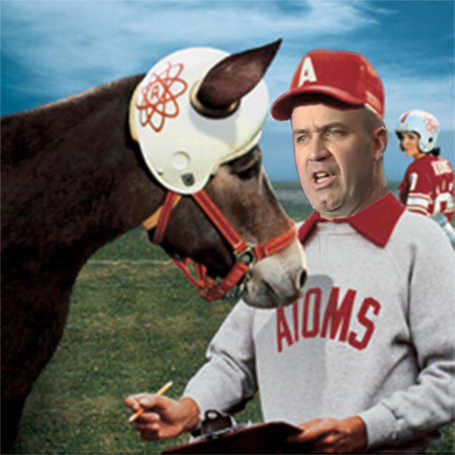 Following today's open tryouts, Bill O'Brien announced the signing of Gus the Mule, who will be joining the team as a kicker. According to Coach O'Brien:

"We had open tryouts after practice today, and Gus just blew us away with his leg strength and accuracy. We had him kick probably close to 50 balls, and he was just driving them. Coach Butler walked him back as far as our own 40 yard line - that's a 70-yard field goal - and Gus cleared it by a good 5 yards."

When asked if Gus would be joining the team immediately, Coach O'Brien responded:

"Yes - we already got him a helmet. He'll be at practice with us tomorrow, competing with Sam Ficken for the placekicking duties. Gus is enrolled in the College of Agricultural Sciences - I believe his major is Animal Science. That's the science of animals. He's already a Penn State student - won't be on scholarship right away. He'll have to earn it. But we're excited to have him. Special thanks to Professor Jud Heinrichs from Dairy Sciences. They have a lot of sciences over there in the Ag school. Anyhow, apparently Professor Heinrichs convinced Gus to come out, brought him over here."

And a big thanks to Jeff Junstrum, who found this high school video on Gus: