So, yeah. Not the result we hoped for, after 10 months of misery. After my third watch of the game, after my emotions were drained, it occurred to me that we'd just seen the 1985 Villanova vs. Georgetown NCAA hoopey-ball championship game. And Ohio was Nova.

That little Doug Flutie Tettleton played a whale of a game. And so did all of his teammates. They dropped almost zero passes. They incurred just a handful of penalties. They turned the ball over exactly zero times. And they were just so frustratingly efficient on offense. They almost never faced 3rd and long. Tettleton completed over 75% of his passes for the entire game - just like Nova, he couldn't miss. So hat's off to Ohio. They're a very well coached, disciplined team, and they earned a hard fought win.

Loved our squad and coaching, too, though. There's a lot to build on. Let's break it all down in gory detail after the jump.

Last year Penn State was 96th in passing efficiency, and 110th in scoring offense. Yesterday, Penn State had zero 3-and-outs on offense. Let that sink in, and allow it to ease you back off the ledge a little bit.

We were this close to more points on several occasions. We had some good running room in each quarter, and McGloin had receivers open a lot - often, breathtakingly open. Allen Robinson doubled his catch total from last year (3) in the first quarter alone. The drawback to passing, particularly to a short passing attack, is that if you don't make completions at a high rate, you're really shooting yourself in the foot. McGloin was 16 for 26 with 2 TD's in the first half - that's winning football. But he was just 11 for 22 with 1 INT in the second half. You can't afford a 50% completion rate in a (mostly) short passing attack. A couple of those were drops, a couple were good defense, and a couple were Mitch Williams. A little more consistency, and this offense will be dy-no-mite.

So you were tired of Cover-3 and the 4-2 Nickle, huh? But, now, Ted Roof should be run out of town, I suppose? Maybe - but I thought the defense played pretty well, actually*.
*DVR stopped just before Ohio U's last possession, which went 87 yards, consumed nearly 7 minutes, and resulted in the game clinching touchdown. Probably better that I couldn't re-watch that anyhow.
As noted at the beginning, Ohio played nearly flawless offensive football. And, on the one play where they screwed up, we tipped an underthrown, certified interception over our safety and into the hands of an Ohio WR. Just couldn't catch a break.
On the play in question, PSU had DE Olaniyan as a OLB in a 3-3 Nickle look. Olaniyan showed blitz (though he dropped off into coverage). Tettleton read blitz, got nervous, bobbled the shotgun snap, and bailed out to his right - away from Olaniyan (who didn't rush), and into Mauti/Carson, who actually did blitz. Tettleton, in the only crap move he made all day long, threw up a prayer off his back foot. The ball floated lazily through the air, where Stephen Obeng appeared to snatch it - except that it went through his hands and deflected UP, over the head of Malcolm Willis, who also thought he'd intercept it - and into some random Ohio wideout, who took the gift into the endzone for six. Had that ball been picked, the PSU defense would have allowed exactly 3 points (from the muffed punt) through nearly 3 quarters of football, against a squad that averaged over 450 yards of offense last year.
One area for improvement by the defense - and this will be critical moving forward, especially with Navy on the schedule - is maintaining gap discipline in the run game. Ohio got next to nothing up the middle through the first 3 quarters. And they got next to nothing on the outside runs - except when, every now and then, we'd lose gap discipline. Let's follow an example from the 1st quarter.
In the shot below, PSU's in a base 4-3 stack, and Ohio is in "the pistol", with a wingback to their left. This will be an outside zone run to PSU's right. Zone runs are awesome because they allow the running back to pick a hole - any hole - and hit it. You don't have to overpower defenders at the point of attack. And best of all (for o-lineman), the backside guard and tackle cut block their defenders - so, with those defenders laying on the ground, there will be a cutback lane for RB, in case the play doesn't get blocked so great to the outside. 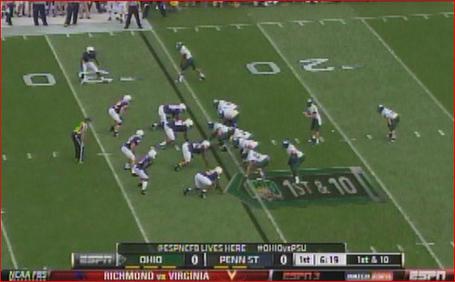 As we see below, the play doesn't get blocked so great to the outside. DE Barnes has penetrated upfield, and forced the Ohio RB back inside. DT's Jones and Hill have moved the line of scrimmage a yard and a half deep. But two things are bad - LB Carson is running into LB Hodges, and the backside DE Olaniyan is on the ground, having been cut. 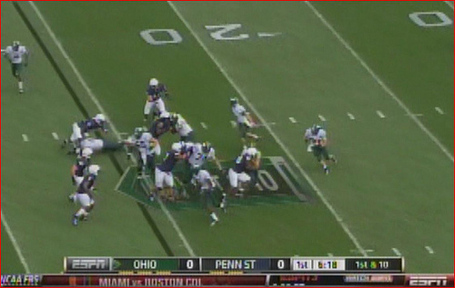 In the shot below, DT Hill and LB Carson have overrun the play. DT Jones can't quite get to the RB, who's already made his cut back inside. And, so, there's no one in the hole. The play goes for 10 yards and a first down. 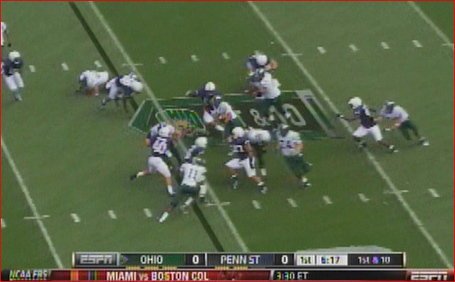 That happened a handful of times - that is, not too often. Ohio RB Blankenship carried 31 times for 109 yards: just a 3.5 average. But it'll be a point of emphasis moving forward, particularly with cut blocking masters Navy in 2 weeks.

Chin up, fellas. Losing blows ass, but Penn State is a good, tough, well coached team. We have an incredibly fun offense to watch. I counted 13 different formations in the first 15 plays. We just missed on the explosive plays that could have swung the game. And the defense - assuming everyone doesn't complete 76% of their passes all season long (and, judging by BigTen conference results from week 1, they won't) - the defense will continue to be solid. And, hey - if someone ever dares to take more than a 3 step drop, you can count on pressure in their face. Let's end with my favorite play of the game - from the very first drive. I present, Mike Zordich killing a man.