UNITED We Stand: On the Future of SB Nation, Black Shoe Diaries, and You

Share All sharing options for: UNITED We Stand: On the Future of SB Nation, Black Shoe Diaries, and You

As you're all now aware, change is coming to SB Nation, which means that this little slice of the internet is about to look a lot different, and not just because of the new logo that everyone loves. I cannot confirm dates as of yet, but Black Shoe Diaries as you know it will look radically different very soon. We've been given the OK to release some details so this doesn't come as a huge shock when you log on one day in the future. Additionally, the guys and gals behind this massive overhaul have shared some screencaps to ease you into the visual transition.

First and foremost, the name of the blog will not be changing. However, a name you'll be hearing a lot about in the near future is United, as in SB Nation United. These new changes represent a marked effort to unify all the blogs in a stronger fashion than the loose relationship they now share. In corporatespeak, we're attempting to synergistically mesh end-user output to optimally enhance strategized output (NOTE: I did that all on my own, without any help. I've been in the corporate world too long). While Black Shoe Diaries will still refer to our piece of the overall picture, the term "United" will be used to reference the entire SBN concerted unification effort.

Take the jump, and let's see what we'll be fighting about in the near future.

The most obvious change, and really the only one that affects you, the reader, is the new layout. The idea behind this was to move to a more "magazine style" layout, as well as allowing those of us behind the scenes to customize content in a more user-friendly manner. It might not seem that way at first, but we're hoping that once all parties, staff and users alike, get the hang of the new system, it will be a major upgrade over the old backend software that powered SBN.

So what can you expect to stay the same, before we dive into the changes? Well, I'll let the Founder and Editorial Director of SB Nation tell you.

OK, great. So the content will be better, cleaner, and faster. But what will it look like? Let's run through some quick screencaps taken from the working versions of other blogs. Remember, these are examples, not necessarily the way the new Black Shoe Diaries will look. Those decisions will be made in the near future, just prior to launch. If you happen to like a certain look below, let us know in the comments. Mike and I are open to any constructive comments you guys provide. 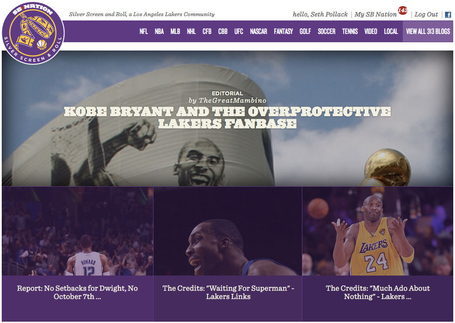 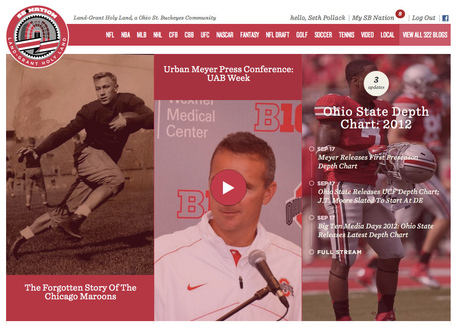 As you'll immediately notice, the old reverse-chronological design has been completely altered to a layout that allows us a lot more customization. Additionally, if you're familiar with our regional HUB site (e.g., Pittsburgh, Philly), you'll notice a lot of similarities.

These layouts allow us to highlight more important stories for longer periods of time, while allowing other stories to cascade through and still get some serious front page face time.

The header bar at the top of the front page will also allow you to easily access the rest of the 300+ blogs on the SBN platform. This will allow you to easily go from BSD, to BHGP, to EDSBS, and anywhere else you may not have realized existed, or simply browse a new blog in a different sport.

Next up, you'll notice above that the FanPosts and FanShots aren't readily seen on the new front page. Yes, these new designs will dominate the lead sections. But rest assured, there will still be places for you to write your FanPost, share your FanShot, and see them all "below the fold". Take a look at the new layout of the FanShots, for example. 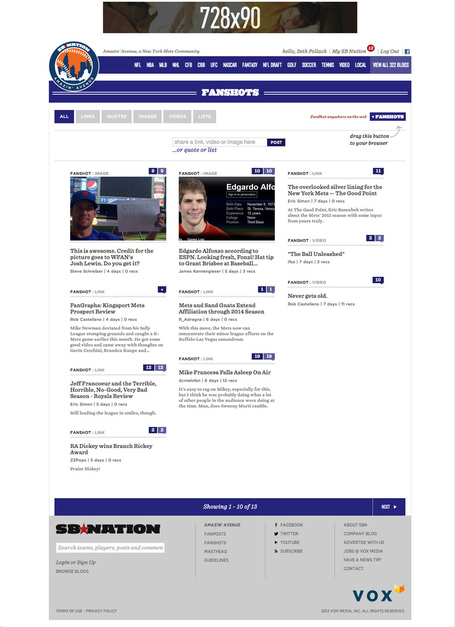 This screencap is from the dedicated FanShots page, but a quick link section will also appear on the front page. This new layout makes it easier to read FanShots (as if anyone would ever do that), as well as the related FanPost page. You can subscribe to these pages (as well as most other pages throughout the website), and there is a working integration with Facebook and other social media, to share stories/posts you like.

One of the biggest changes for the staff and writers, and one that we really think you'll enjoy (though if you frequent the HUB sites, you already enjoy this feature) is the StoryStream.

The StoryStream will allow us to keep all posts related to one story in one place. This way, you don't have to click through six times to get updates on a certain story. As something develops, there is a set place to update. And the best part is, even if a story has faded and dropped off the front page, if there is an update, we can easily update the StoryStream and send it back to the front page. This way, you can easily update yourself on what happened in the story, as the older updates will still be there.

Finally, the new United platform is especially geared to the mobile reader. Take a look at the screencaps from the smartphone and tablet versions of United. 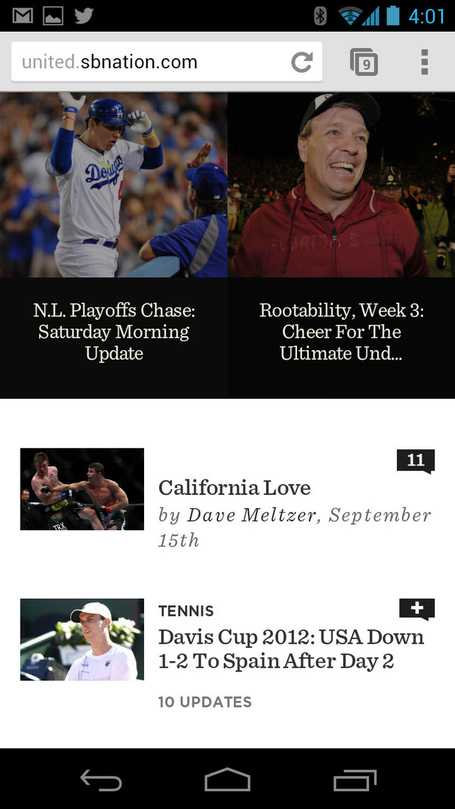 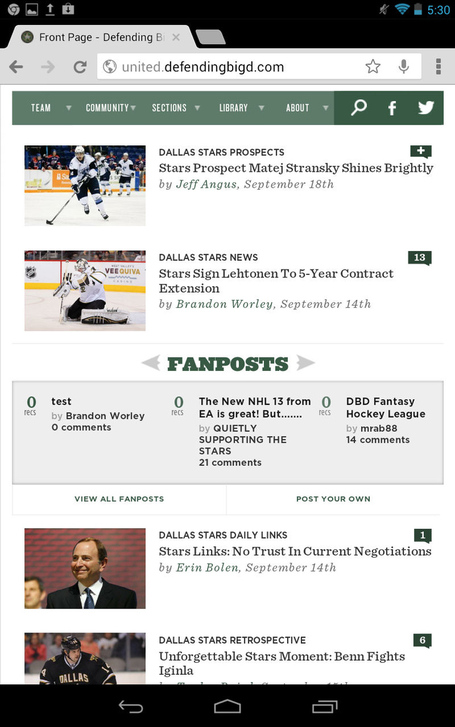 The look is cleaner and more streamlined, and for those of you reading on the go, hopefully you'll find the experience easier to read and navigate.

So my thoughts on the whole change? Honestly, I was skeptical at first, and even voiced some concerns to the higher-ups at SBN. Understandably so, there was concern that this major change would take some getting used to. But after talking with the lead dogs, I'm confident that this new rollout will be very much so for the better.

I know some of you are going to see this and not be thrilled about the change. The only thing I can ask you is to bear with us. Change is different, yes. But different isn't necessarily bad. Give it some time, play around with the new features, and hopefully you'll find that the content production hasn't changed (and should only increase as we're able to customize additional cross-blog content into our pages) and that the navigability, ease of reading, and overall experience has markedly improved.