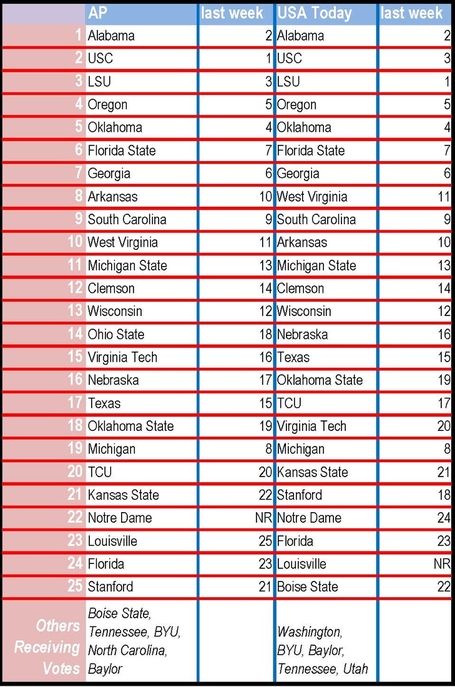 Week two polls: only slightly better than week one, as at least we have (some) football to go off of...though many of the "top" teams elected to play relative cupcakes the first week of the season.

The biggest changes this week came, not unexpectedly, in the forms of the drops of Michigan and Boise State.

After the shellacking it put on the Wolverines, Alabama rightfully took over the number one spot in both polls, and Michigan State only jumped up two spots despite beating Boise at home.

Florida State moved up a spot to number six. LOL.

The SEC still dominates both polls, with five teams in the top ten, and Florida barely making the cut.

The Big Twelve is close behind, with six teams making the list; its teams, though, are more spread out over the rankings--for now; both conferences also have teams poised to make the jump into the top twenty five, with Tennessee and Baylor both making appearances in the "others receiving votes" category.

The Big Ten still has five teams in the polls, counting the AP's votes for OSU, though none are currently in the top ten (Michigan State is the highest, at number 11).

The PAC 12 and ACC each have three teams, while Louisville is the Big East's only appearance. Notre Dame and Boise round out those teams currently in the top twenty five.