After hosting three hoops prospects this past weekend, Pat Chambers struck with a commitment from California prospect Payton Banks. Considering Banks wasn't one of the visitors this past weekend, his commitment comes as somewhat a surprise. PSU offered after his junior season at Orange Lutheran High School, where he helped lead his team to the CIF championship and was named Division 1A first team for California. He played alongside 2012 Arizona signee Gabe York and averaged 15.6 PPG, 6.9 RPG, and 4.4 APG for the Lancers.

Why this is a surprise was at the time of the PSU offer, Banks reportedly had multiple PAC-12 offers and was set on staying out west for school. It seems that many west coast schools cooled on him after the summer, and he was focusing on Penn State, Pepperdine, and Nevada. With scholarship numbers dwindling, it could be possible Banks didn't want the opportunity to pass him up and rushed to his decision. However, he seemed excited and very comfortable with his decision after his official visit in this interview with Lions247.

Banks has been described as a physical forward, capable of playing both inside and out. His highlights show a strong mid-range game and good athleticism. The Nittany Lions were in need of a wing in this class, and Banks will fill that void. It remains to be seen how this will affect the recruitment of Josh Hart, Kamall Richards, DJ Bowles, and the rest of their 2013 targets. With only one scholarship remaining, PSU must find the right fit. 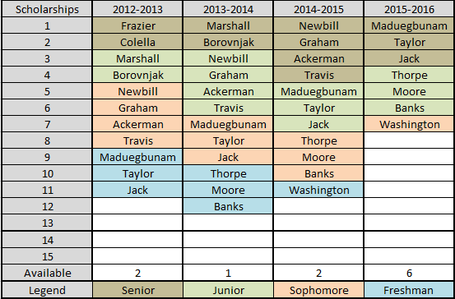