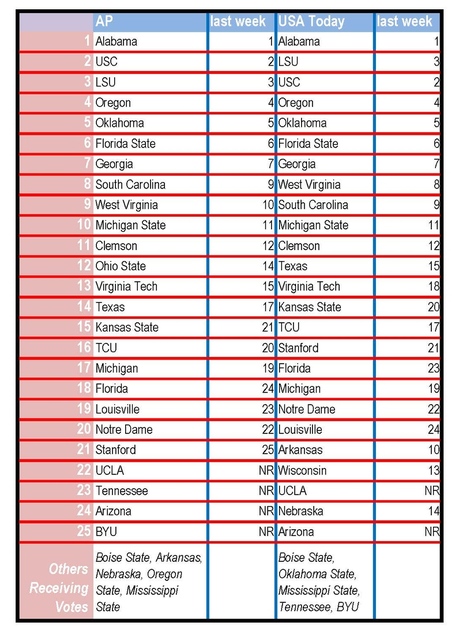 Or, the week that the college football chaos begins.

Losses by Arkansas, Wisconsin, Nebraska, and Oklahoma State, amongst others, means there was some shake up in the polls this week, including a handful of previously unranked teams sliding into both polls.

The Coaches seem more married to their preseason choices, dropping the Razorbacks, Badgers, and Cornhuskers in the polls, but keeping them amongst the ranked teams (UCLA and Arizona, in response to their beatings of Nebraska and Oklahoma State, respectively, entered both polls this week; Oregon State received votes).

Boise State dropped out of both polls, despite not playing this week; Tennessee and BYU snuck into the AP poll, after the two losing Big Ten ranked teams fell out.

The SEC still has six ranked teams in either poll, with now only three in the top ten.

The Big Twelve and Pac 12 each have five ranked teams in each poll, with the Big 12's teams getting boosts from the losses ahead of them, and the Pac 12 adding UCLA and Arizona to their list of ranked squads.

The Big Ten is down to three ranked teams in the AP Poll (with Ohio State), and four in the Coaches Poll. The ACC has three ranked teams in both, and the Big East has its lone team with Louisville. Notre Dame and BYU are the only non-BCS teams to be ranked this week, and both have no current conference affiliates.