Penn State entered the weekend without either of the Alton brothers, both were still suspended for an "altercation" that occurred in Lock Haven last month. So you would think that losing two wrestlers ranked in the top 5 would affect the outcome of a Big Ten wrestling match in some way, right? Well you wold be wrong as the two James stepped in and Penn State didn't miss a beat. James English shut out a veteran Dan Osterman 6-0 and James Vollrath beat #19-ranked David Cheza 6-4 on a late takedown in the third. Michigan State's only other ranked wrestler, Heavyweight Michael McClure, was upset by Penn State's Jon Gingrich 5-3 on a strong double-leg takedown and 2 back points again in the 3rd period. Late takedowns were the theme for the Lions as several wrestlers fought until the last whistle. It was the kind of effort that Cael Sanderson looks for and he has to be happy after a solid dual win against a Big Ten opponent. 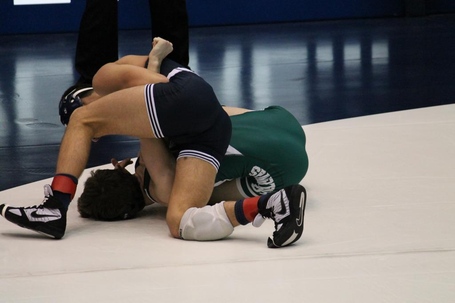 Nico put on a takedown clinic notching 3 in the first period to take a 6-2 lead. He added two more in the second and two nearfall points to stretch the lead to 13-3 with 2:00 minutes of riding time. Nico continued his offense getting two more takedowns and a stall point to win by major decision 19-6. Megaludis looked frustrated in the 3rd as Lyon was just trying to minimize the damage, hence the stall calls. The outcome could have been worse but there's only so much a wrestler can do when his opponent wrestles defensive the whole match. 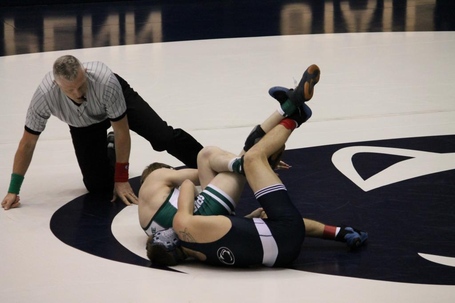 Conaway remained undefeated in dual meet action beating Brandon Fifield of MSU 7-2. Conaway jumped out to an early lead by notching a takedown on a counter off a Fifield shot and rode the Spartan wrestler for the entire 1st period to lead 2-0 with almost 2 minutes of riding time after one. Conaway stretched the lead to 4-0 after a reversal and ride out of the 2nd period. Jordan added a late takedown in the 3rd and with the riding time point, won 7-2. 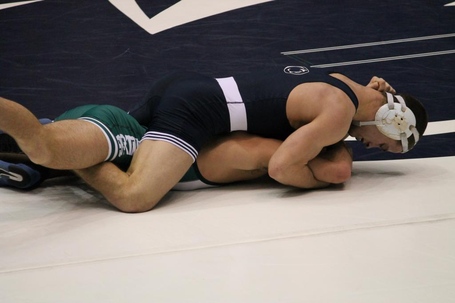 Pearsall converted an early scramble into a takedown and looked to put on a strong ride. Pearsall managed to ride Trimble for the rest of the 1st while turning the Spartan for 3 backpoints to lead 5-0 after one. Pearsall added an escape and another takedown in the 2nd to lead 8-0 heading into the final period. Pearsall got sloppy in the 3rd getting reversed but escaped and fought off Trimble's last ditch efforts to win by a 10-2 major decision with the riding time point.

Vollrath and Cheza exchanged shots without either wrestler scoring early in the match. Cheza scored first off of a Vollrath shot to take an early 2-1 lead after the 1st period. Cheza chose down to start the 2nd and added an escape but Vollrath notched the only takedown of the period and trailed by 1 after a Cheza escape. Vollrath took down to start the final period and quickly escaped to tie the bout. The two battled but Vollrath clinched the match with a low single-leg takedown with 20 seconds left and rode Cheza out for the 6-4 upset victory. 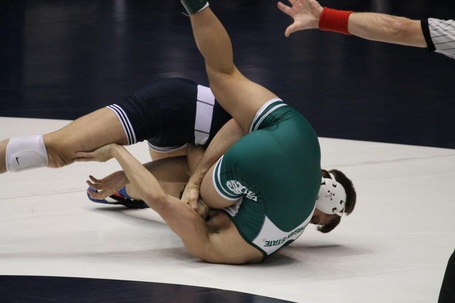 David Taylor did what David Taylor does, destroying an unranked opponent for a pin. Taylor put on a takedown clinic early and converted a cradle into a pin. Ed Ruth would be proud. 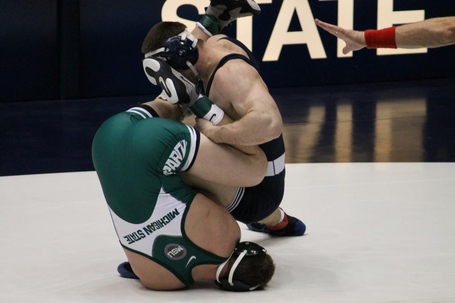 Speaking of takedown clinic, Brown used 9 takedowns, and three nearfall points to win by tech fall 22-7 at the 6:17 mark. Not sure what else to say here, this is the kind of dominance you expect from the middle of Penn State's lineup.

Another match another Ed Ruth cradle for a pin. After a Ruth takedown off a wild scramble Ed did his magic. Oh Rizqallah tried his damnedest to not give up the cradle but like I've said before: It's Ed Ruth's world, we're all just living in it. 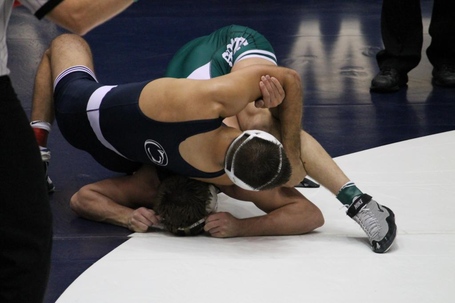 Wright loves the upper body throws and he won't give up on them until absolutely necessary. Q controlled the match and rolled to a 13-4 major decision with 2:13 of riding time. Wright used 3 takedowns, a reversal, an escape, and a riding time point to secure the major.

This was the one match that Sparty had a serious advantage as Michael McClure stepped to the mat ranked #4 with only 1 loss on the season. The match went as most heavy's go, not a lot of scoring chances occurred in the first two periods. McClure escaped to start the 3rd period and the match was tied at 1-1. With just under a minute to go, Gingrich brought the crowd to their feet converting a very strong double leg shot into a takedown and held McClure on his back long enough to get 2 nearfall points. Gingrich gave up the escape and a stall point but held on to get the huge upset 5-3.

-Rumor has it that Jon Gingrich beat Jimmy Lawson in a heavyweight wrestle-off prior to the match. I'm not sure if that's true or not but Gingrich looked really determined Sunday, far more focused and aggressive then I've seen all year. I hope that's a trend.

-McClure was shorter than Gingrich but he was ripped for a Heavyweight. That just goes to show you when it comes to wrestling, technique is more important than brute strength.

-I'm not sure of the final count but I believe Penn State had more stall calls against them than Michigan State. That is totally ridiculous given the number of Sparty wrestlers that were just trying to not get beat bad. Gotta love college wrestling refs.