You might have already heard, but the Big Ten conference is pretty good in men's basketball this year. While Penn State has already taken themselves out of contention, the league race at the top will be very entertaining to watch this winter. The conference season is about a third over, giving the numbers a credible sample size, so BSD will be the recapping the week that was across the league each Monday for the rest of the season.

These metrics help us quantify who has been the best in conference play, aside from W-L record. Thus far, it's impossible to put anyone above Michigan, who continues to score with ease on practically anyone. There's Wisconsin in the picture yet again, as they continue to go about their business in the Big Ten. We've seen glimpses of the Hoosiers' firepower on offense, but they've struggled sustaining it for an entire game. If Indiana starts putting together full 40 minutes, they'll likely close the gap with Michigan.

This scatter plot visualizes the previous table's numbers. The darkened crosslines represent the average in league play for both offensive and defensive efficiency. Quadrant 1 is obviously the best place to be, while quadrant 4 is the worst (hi, Penn State). 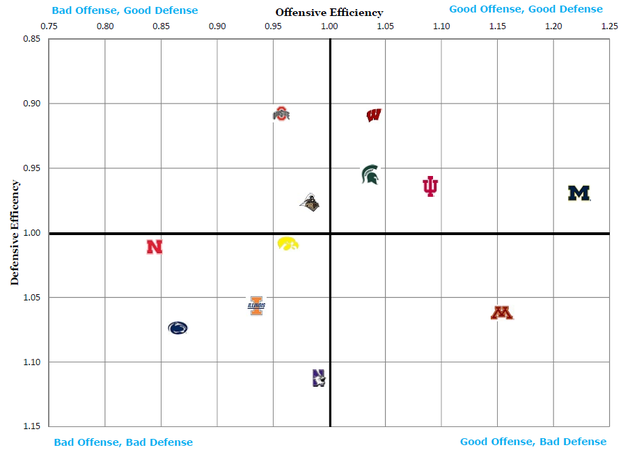 It's well-documented how tough it is to win on the road in league play. Whoever emerges as the regular season champion will likely have those few big road wins against the other contenders to their resumé. These standings help weigh who's won where to give a more accurate indication of the conference race, since the schedule is far from balanced (PSU just finished a 5-game stretch where they had four home games). The +/- number is calculated by simply awarding each team a point for a road win and taking a point away for a home loss. The far right column shows how many road games each team has remaining.

THIS WEEK: vs Purdue (Thursday), at Illinois (Sunday)

The young Wolverines picked up a huge road win in the Barn on Thursday night. Once again, their opponents' couldn't keep up with their production on offense (1.26 PPP). As mentioned above, these are the kinds of wins that will create separation at the top, if you can steal a few on the road and hold serve at home. Despite their youth, Michigan's composure continues to impress. You might've heard about that Trey Burke fellow, who's making a strong case for Big Ten National POY.

THIS WEEK: vs Michigan State (Tuesday), vs Minnesota (Saturday)

Raise of hands, who imagined Wisconsin leaving Bloomington as a winner back in November? Despite losing Josh Gasser in the preseason to an ACL tear, the Badgers continue to frustrate conference opponents' with their plodding pace and discipline. They had an understandable letdown against the Hawkeyes, but are right in the thick of things. They have two big games this week in their safe haven, the Kohl Center. It's a big opportunity for Wisconsin to further legitimize their status as a Big Ten contender.

THIS WEEK: vs Penn State (Wednesday), vs Michigan State (Sunday)

The Hoosiers lost another head-scratcher at home to Wisconsin, their eleventh straight loss to Bo Ryan's Badgers. Wisconsin dictated the game like they do so well, but Indiana shouldn't be dictated by anyone. Cody Zeller disappeared in the 2nd half as the Hoosiers started forcing jump shots. Tough loss for Tom Crean's team, but they did rebound on the road at Northwestern. They have a big game this weekend versus the Spartans in Assembly Hall.

THIS WEEK: at Wisconsin (Tuesday), at Indiana (Sunday)

It was an eventful week for Tom Izzo's team, who got into a fight with each in State College, but they were able to stretch their winning streak to five games. Adreian Payne, one of the perpetrators in the fight, redeemed himself in State College with 20 points in 17 minutes. He followed up with another strong 14-point performance against the Buckeyes in a big home win that gave the Spartans' sole possession of first place. However, they likely won't maintain that spot at the top after this week's road-trips.

THIS WEEK: at Northwestern (Wednesday), at Wisconsin (Saturday)

The Gophers dropped a tough one at home this week to Michigan. They certainly aren't out of it, but their defense has been sub-par so far this conference season (or is it caused by their turnovers problem?). Granted they've already faced the three strongest attacks in the league, but you can't give up 83 points at home and expect to win. They have two road-trips on tap this week and winning both would go a long way to getting Minnesota back at the top.

THIS WEEK: vs Iowa (Tuesday), at Penn State (Saturday)

The DeShaun Thomas show continues its casting for supporting actors. The junior forward has shouldered the load for the Bucks all season long, but the 20 PPG scorer needs help. He dropped 28 points against Michigan State, exactly half of his team's total in East Lansing. The Bucks' defense has been the only unit to slow down Michigan's attack, but their own struggles on offense need to be addressed if OSU is to contend for the title again.

THIS WEEK: at Ohio State (Tuesday), at Purdue (Sunday)

The Hawkeyes finally broke through with a quality win at home versus Wisconsin after blowing previous opportunities vs Michigan State and Indiana. They remain firmly entrenched in the middle of the league, better than the bottom half but not quite on par with the group at the top. They do still have a realistic shot to make the NCAAs, if they avoid bad losses and continue to win at home. A few road victories wouldn't hurt either, and they have some chances this week to snag one.

THIS WEEK: at Michigan (Thursday), vs Iowa (Sunday)

The young Boilers continue to make great strides since conference play began. They didn't have a Big Ten game this weekend, but they also put a whooping on West Virginia at Mackey Arena (79-52). Matt Painter's team doesn't have that eye-opening win yet, but if they continue making steady progress, they could surprise someone in West Lafayette. The Boilers' defense continues to be their staple, while seven-foot freshman AJ Hammons has a bright future.

THIS WEEK: vs Minnesota (Wednesday), at Nebraska (Saturday)

The bizarro Wildcats have yet to really even compete at home but already have two road wins under their belt. Sure, Michigan and Indiana could run many teams off their home floors, but Northwestern also lost by 20 in Welsh-Ryan to Iowa. With Drew Crawford out for the year and a so-so non-conference performance, this ain't the year for Northwestern, but they do have four freshmen in their 8-man rotation gaining valuable experience including seven-footer Alex Olah.

THIS WEEK: vs Illinois (Tuesday), vs Northwestern (Saturday)

The short-handed Huskers continue to fight under new coach, Tim Miles. They picked up the first Big Ten win of the coach's career with a road victory in State College. True freshmen wing Shavon Shields, likely the Big Ten POW, exploded on the scene with 18 points vs Purdue (on 11 shots) and 29 points at Penn State (on 11 shots). The Huskers have a chance this week to keep their momentum rolling with two home games this week with reeling Illinois and Northwestern.

THIS WEEK: at Nebraska (Tuesday), vs Michigan (Sunday)

The Illini came into Big Ten play off an overachieving non-conference slate that saw them win the Maui Invitational and at Gonzaga. However, they are heavily reliant on three-point shooting in their offense, and it seemed doubtful they'd be able to sustain a 37% percentage from beyond the arc in conference play. Sure enough they haven't been able to so far, but I don't think anyone envisioned this team getting blown off their own floor by Northwestern. They haven't even been competitive in their last three games. There's still time to regroup and make the Big Dance, but they need to regain their previous form sooner than later. Like, next game sooner.

THIS WEEK: at Indiana (Wednesday), vs Ohio State (Saturday)

The bottom gets deeper and deeper for the Nittany Lions, who still couldn't get over the hump at home despite finding some much-needed offense. There's still a long way to go in the season, but after already losing 4 home games, some wonder if/when PSU will win another game the rest of the year. Their schedule doesn't do them any favors this week with a roadtrip to Bloomington and the Buckeyes, who own a 17-game winning streak over PSU, coming to town.