Penn State welcomed 24th Wisconsin Friday night and traveled to Purdue to take on the Boilermakers Sunday afternoon. The teams might be different but the results were the same: the Lions crushed Wisconsin 36-6 and nearly shut out Purdue 35-3. It was a weekend of bonus points, Penn State had 4 pins, a forfeit, 2 tech falls, and 2 major decisions. Quentin Wright got his name in the record books getting his 100th and 101st win of his storied career. If it wasn't for Wright the big story of the weekend would have been the huge upset victory for Jordan Conaway over 3rd-ranked Tyler Graff of Wisconsin. Conaway was down 7-4 in the third period, got two late takedowns to send it to overtime and gutted out a sudden victory win. Hopefully, a signature win like that propels Jordan for the rest of the season and into the post season.

Nico's weekend was pretty much like most of his matches, he had an intense motor and pushed the action to the final whistle. He got a tech fall against Cavallaris of Wisconsin and a 5-1 decision over #17 Camden Eppert of Purdue. The 5-1 regular decision might look a bit scary to the naked eye but it wasn't that close. Nico used a strong ride to amass 3:43 of riding time including a ride out in the second period. If he needed it, Nico could have made the score a wider margin but settled for two reversals and the riding time point. 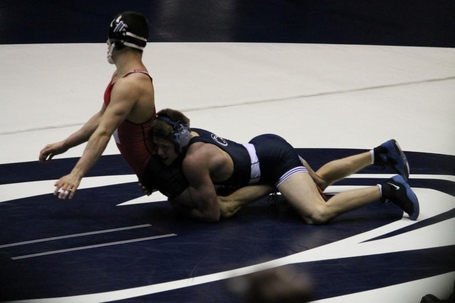 Conaway had a huge weekend getting a major and the come from behind upset win over #3 Tyler Graff of Wisconsin. In the 1st and 2nd period of the Graff bout, Conaway looked timid and fell behind 6-3 after the 1st period. The two traded escapes in the 2nd and 3rd and Conaway was looking at a 7-4 deficit. Conaway pushed the action, got a stall warning, and a takedown with 29 seconds left. After a quick Graff escape, Conaway tied the dual with another takedown with just 20 seconds left to send the match to overtime. The two scrambled to a stalemate and Conaway slipped behind Graff for the final sudden victory takedown (pictured above). Conaway certainly deserves all of the credit but all three takedowns were counter takedowns by Jordan and all three shots by Graff were pretty lazy by his standards. Conaway had plenty left in the gas tank, I can not say the same for Graff.

Pearsall took a page out of Ed Ruth's book locking up a cradle and pinning Tom Kelliher of Wisconsin. The Purdue dual wasn't as easy for Bryan, he had to use an escape, reversal, and a strong 3rd period ride to win 4-2. After a scoreless 1st period, Pearsall got reversed by Nelsen but got the escape. He chose down to start the 3rd, got a reversal of his own and then rode Nelson out for the final score.

Both Jameses had pretty forgettable weekends. English was the only Penn State wrestler to lose both duals and Vollrath barely beat two guys with a combined 20-14 record. Vollrath got taken down and reversed late in the Churchard match after taking a 10-5 lead. He did hold on for the 12-9 win but it was way too close and a very sloppy finish. 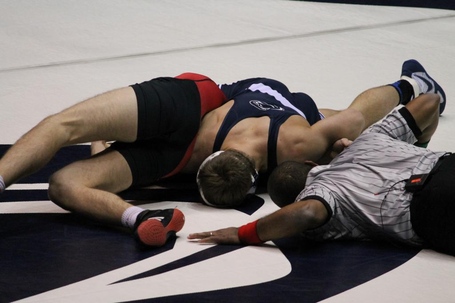 David Taylor scored a tech fall and a pin to put him in the top-ten in career pins on the Penn State list. What does that mean to you? David Taylor is scary good. I don't know what else to say.

Brown had a mixed weekend getting the major against Mosier of Purdue but he barely beat Liegel 12-8, a wrestler who was 1 win over .500. Brown was actually down in the match but kept up his offense and won it in the 3rd. Brown will be a force come tournament time but he's not the dominant wrestler we've come to know lately. I'm not sure if there's something physically wrong, but he just doesn't seem himself.

Wisconsin figured out what Penn State fans already know: Ed Ruth will own you. The Badgers were willing to hand him the 6 points as he got a forfeit. The Boilermakers did not get the message and sent out Crowder who was Purdue's backup at 184. This did not end well for him. The match went like this: takedown, cradle, backpoints, end of 1st. Takedown, cradle pin. Lather rinse repeat. 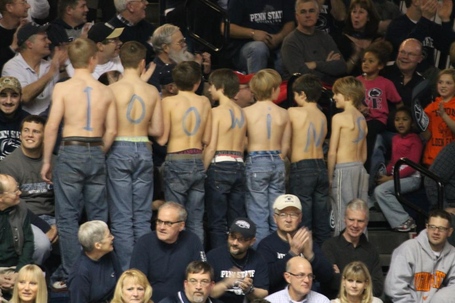 Quentin wrestled two ranked wrestlers this weekend and dominated both. Q beat Hein of Wisconsin by pinfall for his 100th victory. Wright has added a nifty split scissors to his wrestling tool-set and it's worked well for him. He caught Hein in it and managed the pin. That's a move you don't see in college wrestling too often Quentin make it work.

Against Atwood, Wright used a strong double leg for an early takedown and rode out the period. He never let Atwood wrestle his game and built up 1:31 in riding time as he rolled to a 7-1 win. There was a controversial fleeing the mat call that Byers said was a bad call that went Quentin's way giving him a point. If there's one universal truth its that Big Ten officials are bad everywhere.

Gingrich split the duals this weekend losing to 11th ranked Connor Medbery of Wisconsin but beat Alex White of Purdue by a 4-1 heavyweight-esque score. Jon has a strong double leg shot that he has to use more often. He used it to beat #4 Michael McClure of Michigan State last week, a move that got him Big Ten Wrestler of the week. Gingrich is a good athlete, he just needs to trust himself and make the next step. Penn State will need him to wrestle well in the Big Ten's and nationals if they are going to repeat as champions.