BSD recaps the week that was in Big Ten Men's hoops.

Michigan continues to just go about their business in Big Ten play. No one has even come close to matching their efficiency on offense. Granted, the back-end of their schedule is the toughest, but you cannot deny what the Wolverines' have done so far. Everything else shakes out about as expected, given the results of the games. Penn State's offense has officially taken the title of worst in the league from Nebraska. 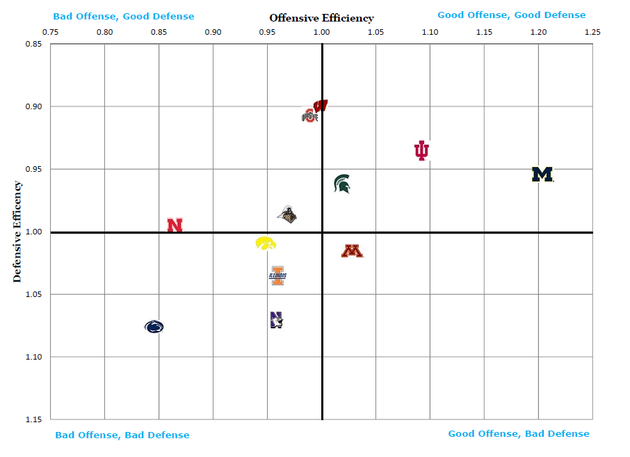 The big road win this week was Michigan State going into the Kohl Center and emerging victorious. Illinois had stopped their recent bleeding with a road win at Nebraska, but gave it right back yesterday with a loss at home to Michigan. You have to wonder how much that Wisconsin loss is going to haunt Indiana in their quest for the Big Ten title.

THIS WEEK: vs Northwestern (Wednesday), at Indiana (Saturday)

Michigan maintained their dominance with two more comfortable wins this week. They do still have six games remaining against their top contenders - (2) vs Indiana, (2) vs Michigan State, (1) at Wisconsin, and (1) vs Ohio State. Those games will ultimately decide if Michigan is the best team in the conference, but the likely new #1 team is in a great position heading into February. Monster game this Saturday night in Bloomington as the Wolverines to Assembly Hall.

THIS WEEK: at Purdue (Wednesday), vs Michigan (Saturday)

Indiana's offense seems to have regained its form, despite Cody Zeller's limited impact. The preseason POY scored just 11 points in 2 games this week, but his teammate is looking more and more like the actual POY. Victor Oladipo continues to stuff the stat sheet, averaging 20 PPG, 6.5 RPG, 3 APG, 4.5 SPG, and 1.5 BPG in 2 games this week. Big week for the Hoosiers as they face their jumpstart rivals in West Lafayette while facing Michigan at home.

THIS WEEK: vs Illinois (Thursday)

Despite the loss yesterday, you'd have to think MSU is content getting just one win last week. Not many teams want to see back-to-back roadtrips to Madison and Bloomington on their schedule. The Spartans remain in the hunt and have a light week with just the struggling Fighting Illini at home.

THIS WEEK: vs Wisconsin (Tuesday), at Nebraska (Saturday)

Ohio State took care of their business to remain in the hunt. Interesting game in Columbus on Tuesday as both Wisconsin and OSU have nearly identical efficiency outputs so far into the conference season. Both teams have been the best defensively, but don't score as much as their teams have in the past. The winner will stay in the conference race while the loser will have ground to make up.

THIS WEEK: at Ohio State (Tuesday), at Illinois (Sunday)

The Badgers had a chance to stay at the top if they held serve at home, but they were unable to beat the Spartans. Now they have a crucial roadtrip to Columbus that we just talked about. They have another roadtrip this week to Champagne to face the desperate Illini. These back-to-back roadtrips in one week can be devastating to one's conference hopes. Just ask Minnesota.

THIS WEEK: vs Indiana (Wednesday), at Northwestern (Saturday)

You have to give credit to Matt Painter and his young Purdue club. Not many people thought they'd win as many as four games after their lackluster non-conference performance. But we haven't even reached the halfway point and they've already accumulated four victories. They're still looking for a signature win, but the Boilers have to be pleased with their progress so far.

THIS WEEK: vs Nebraska (Tuesday), vs Iowa (Sunday)

The Gophers free-fall continues as they have now lost four games in a row. The Northwestern struggle was a particularly deflating loss after Minnesota was confused by the 1-3-1 zone for most of the game. Their turnoverwoes continued, and they were unable to score 50 against the 2nd worst defense in the league. The schedule gives them a chance to regain some confidence and momentum this week, but they're all-but-out of the race at the top at this point.

THIS WEEK: at Michigan (Wednesday), vs Purdue (Saturday)

Northwestern was able to come up with a big win against Minnesota at Welsh-Ryan, but followed it up with a dreadful performance in Lincoln. The Wildcats are wallowing in mediocrity, but with their youth, they are in good position for a better year next year. However, for the rest of this year, they'll be fighting for yet another NIT appearance at best.

THIS WEEK: at Michigan State (Thursday), vs Wisconsin (Sunday)

The Illini briefly stopped their slump in Lincoln, but weren't able to come up with the big upset of Michigan. They are still in the postseason hunt, but they need to start pulling some upsets if they still have hopes for March. They have two big opportunities to do so this week.

THIS WEEK: vs Penn State (Thursday), at Minnesota (Sunday)

Iowa also wasn't able to steal one of their two roadtrips and now find themselves in a bit of rut as well. With their Big Dance hopes also dwindling, it seems like the Hawkeyes are still a year away. Fran McCaffery's bunch has a make-or-break week and could get back on track with a nice road win this weekend at the Barn versus the struggling Gophers.

THIS WEEK: at Minnesota (Tuesday), vs Ohio State (Saturday)

Nebraska continues to find moderate success under first year coach Tim Miles. However, the schedule gets a bit harder for the Huskers over the next few weeks. If the Gophers manage to stay ranked this week, four out of Nebraska's next 5 games are against ranked foes.

THIS WEEK: at Iowa (Thursday)

Penn State continues to do Penn State things, as their disaster of an offense was only able to muster 100 points in two games. The Lions will have a chance for some much-needed rest this weekend after a roadtrip to Carver Hawkeye Arena. Chambers still believes his team is on the verge of breaking through into the win column, but they have yet to win a conference road game under the 2nd year coach.