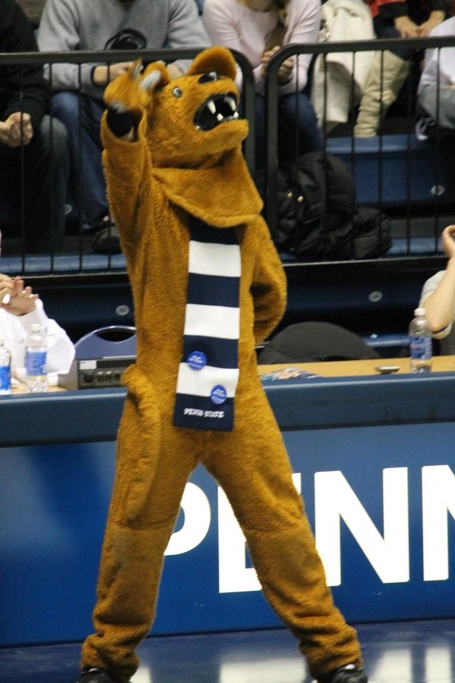 The Penn State wrestling squad welcomed another top-20 team to Rec Hall and unceremoniously disposed of them 33-9. The Alton twins returned to the lineup with mixed results and Matt Brown's lofty ranking is in serious danger. Other than a few snags, the team wrestled fairly well considering it was Penn State's toughest home dual. Now the Lions go on the road for their toughest road test as they head to hated rival Iowa for a 9:00 PM dual that will be broadcast live by the Big Ten Network. Feel the hate people!

Unfortunately, Nebraska couldn't field a wrestler at 125 and Nico received a forfeit. I say "unfortunately" because I would rather Penn State beat a team when they have their full lineup and I would rather watch Nico wrestle than get his hand raised. Oh well, 6 points for the good guys. 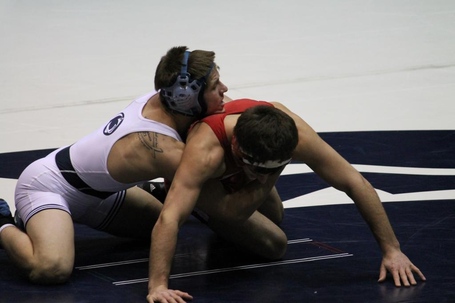 Coming off the huge upset victory over #3 Graff of Wisconsin, Conaway matched up with a wrestler he "should" beat. Even though he gave up the first takedown, Jordan was relentless getting a quick escape and takedown with 1 second left to lead 3-2 going into the second. He then rode the entire 2nd period out building up a big advantage in riding time and forcing a stall call. He started the 3rd with a reversal and pushed the action. He countered a Nagel shot for a takedown and then cut him to go for the major. Two takedowns, two nearfall points, and a riding time point later and Conaway walked off the mat with a 14-5 major. Jordan looks like his confidence is growing the more he wrestles. He's still undersized for 133 but he's getting the most out of his opportunity. Next weekend presents a huge challenge for Conaway, he'll get two ranked wrestlers at Iowa and Illinois.

Bryan is close to taking the next step and moving into the rankings. He had a huge opportunity in 19th-ranked Ridge Kiley and didn't disappoint. Pearsall couldn't get his neutral offense going but relied on what he does best: riding. After a scoreless 1st, Pearsall rode Kiley for the entire 2nd period, built up riding time and added an escape in the 3rd. The duo traded shots late in the match but Pearsall was able to fend off any takedown attempts and walked away with a 2-0 shutout with the riding time point.

Sunday was the anticipated return of the Alton brothers, but things didn't go the way most Penn State fans planned. Andrew built up a 4-1 lead after the 1st but completely ran out of gas in the 2nd period. It's one thing to tire out in the 3rd but there's no excuse for dying in the 2nd. I'm not sure if Andrew is sick or just not in dual shape after the long layoff but he looked bad. He eventually gave up the pin to a wrestler he should have destroyed. 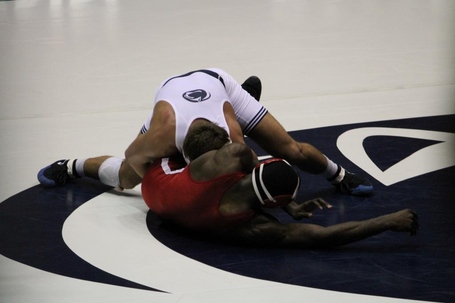 Unlike his brother, Dylan had plenty in the tank against #4 James Green. The two traded shots in the first without any scoring all though Dylan planted Green on his back but the ref said no points (more on that later). The two traded escapes in the 2nd and start of the 3rd to tie the score 1-1. Alton kept up his offense and landed a strong double leg takedown with 20 seconds on the clock for the 3-1 victory. Alton proved he's a top-5 wrestler and gets a anticipated rematch with top-ranked St. John next Friday. 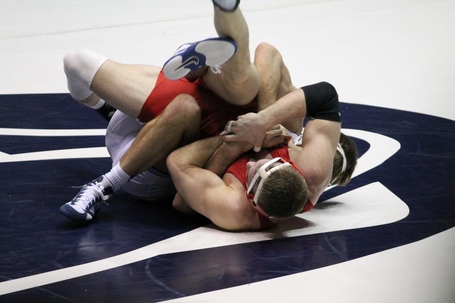 Hey look a pic of Taylor getting backpoints, you don't see that often. Photo: BSD/Galen

Taylor took a different rout in his match against Koehn, instead of going for quick takedowns early, he took the senior down and worked from the top. He turned Koehn twice for 5 nearfall points and a 7-1 lead after one. Koehn chose down to start the 2nd and Taylor ate him alive getting nearfall after nearfall and taking a 15-1 lead after the 2nd. Taylor chose down to start the 3rd and quickly escaped for the 16-1 tech fall.

Like I said previously, Brown has not been wrestling like he did in the beginning of the season and it showed against 4th-ranked Kokesh. Brown looked sluggish in the 3rd giving up several lazy takedowns as he fell behind 7-4. Known for his endless motor, Brown certainly looked like he was running out of gas. Perhaps wrestling for a full season of Big Ten duals is getting to Brown but there's something off. He did get a late takedown and secured a cradle but ran out of time to pull of the win. 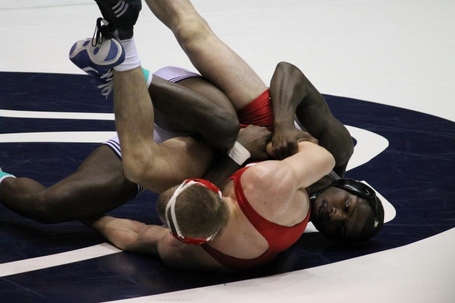 Hey look a pic of Ruth getting backpoints, you don't see that often. Photo: BSD/Galen

Ed Ruth wrestled a top-ten wrestler and gave up the first takedown to #8 Ihnen. He then proceeded to escape; take Ihnen down, and thrash him for a 18-3 tech fall. If that doesn't convince you that Ed Ruth is heads and shoulders above everyone else at 184 I don't know what else to say. He's manhandled the defending champ and beaten the 3rd and 8th ranked wrestlers. Ed's on a mission and God help anyone that stands in his way, because Ed Ruth WILL cradle your ass. 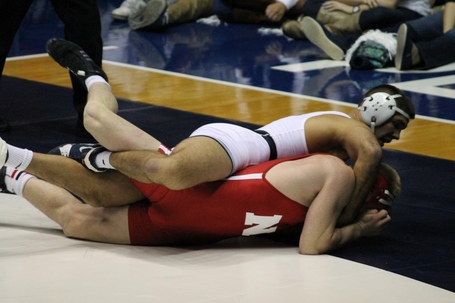 Wright opened up the offense early getting a takedown and riding Kolb for the remainder of the period building up 2:03 of riding time. He added an escape and a late takedown to lead 5-0 going into the final period. Wright gave up the escape but added two takedowns, and with the riding time point, got the major decision 10-2. It was a workmanlike performance considering Kolb's only goal was to not give up the split scissors. It would have been nice if Wright would have gotten some stall calls because Kolb was definitely stalling, but again... officials.

Like 125, Nebraska's starter at Heavyweight was out so 197 pounder Spenser Johnson moved up. The weight difference was immediately noticeable, Johnson got in on Gingrich's legs but couldn't finish, Jon was just too strong and fought off every attempt . Gingrich notched two double-leg takedowns, one in the first and one in the third, and cruised to a 7-4 win with the riding time point. Gingrich nearly turned Johnson several times but couldn't get anything more than a 1 count.

Refereeing - Jesus, Mary and Joseph was that some absolute dismal refereeing. I don't know the ref's name but I've seen him plenty before and the only thing that's consistent about his calls is that he's consistently inconsistent. I'm not even complaining from a Penn State point of view I'm complaining from a wrestling fan's point of view. Dylan Alton took James Green down at the end of the 1st and planted him clearly on his back as time ticked down. At the very least it should have been a takedown and it probably was 2 back points as well, but Dylan got nothing. Both teams should have had stalling called more often but the stall calls that were called just left most fans scratching their heads. It's one thing to have suspect officials it's another when a incompetent ref ruins an otherwise enjoyable match.

Replay - the NCAA is toying with mat-side replay this year and they might as well throw it out the window in the format they are using. The coach can challenge a call and it gets replayed. Even though there are two refs, the ref that made the original call is the one viewing the replay. That's just a stupid idea, what official is going to admit they screwed up royally? Cael challenged the Alton call, the ref looked at it and said, 'Yep, I was right!' even though it was clearly a takedown. Either have the second ref handle the replay or get rid of it. It's worthless.

White Out - As you can see from the feature picture, the powers that be attempted a "white out" with varied success. I'm not sure of the proper channels of communication but it was apparent that some people didn't get the message. I think they can look at the schedule at the beginning of the season and reasonably determine which match should be the white out. Printing this information right on our tickets would probably get a better turnout.

So here it is, the dual meet all Penn State fans look forward to (and I'm sure a lot of Iowa fans do as well). Penn State travels to Iowa City to take on the Iowa Hawkeyes Friday February 1st at 9:00 PM. Iowa is ranked 4th and is coming off a thrilling 16-15 win over No. 3 Minnesota. It was a dual that came down to three tiebreakers after it ended in a 15-all tie. It's Penn State-Iowa, nationally televised on a Friday night; it doesn't get any better than this.