There's cause for concern over this Hoosier offense, but a lackluster defense may keep Indiana from reaching that ever-elusive six-win plateau.

Before we start, a quick note: we're a quarter of the way through the regular season, so the Know Your Foe format will change a little starting this week. There's no need for a "Last Season" and  "Offseason" section anymore, so they will be replaced with more relevant stuff. Shall we then?

The Hoosiers were tipped by some to have some success in 2013, but an early slip-up on the banana peel that is Navy's option attack may have prematurely quashed any hope of a bowl appearance for Kevin Wilson and company. Indiana had a chance to right the ship and enter B1G play with some momentum in their Sept. 21st visit to Missouri, but they fell behind by two touchdowns early and couldn't quite muster up a substantial comeback.

There were some bright spots in the non-con, though the shinier moments came against inferior competition. Indiana surged past FCS rivals Indiana State, 73-25, missing out on tying the school record for points scored by just a field goal. They sandwiched a 32-point win over a not-terrible Bowling Green between the two losses, and one thing is clear through four games: these Hoosiers can put up points if you give them the chance.

Nate Sudfeld was cruising at quarterback for about 13 quarters. The sophomore took over from redshirt soph Tre Roberson in the second quarter of the season opener and never looked back. At least until the second half of the Missouri contest, where Roberson stepped in for a turnover-happy Sudfeld. Quite a shame, considering how well he'd been playing--seventh in the nation in pass efficiency after three games. He's still the B1G's third most efficient signal caller after four games, behind Nathan Scheelhaase and Kenny Guiton.

Sudfeld has some weapons to work with. Tevin Coleman has been thrust into a larger role in the Hoosier backfield this season and he's made the most of it. Rushing for 386 yards on just 58 carries, he and Stephen Houston average a combined 6.7 yards per carry. On the flanks, Cody Latimer and Shane Wynn are the big play threats. Both average over 18 yards per catch. On the whole, Indiana's receiving corps averages 14.5 ypc, compared to Penn State's 12.9 ypc. The bottom line is Indiana can move the ball.

The issues for Indiana have mainly come on this side of the ball. This is a unit that allowed 35 points to Indiana State and 41 points to Navy. Navy, by the way, was only able to muster a lone touchdown against Western Kentucky last week.

The number is skewed a little thanks to Navy, but Indiana is allowing 247 rushing yards per game. The lights that just flashed across your eye are the reflections of the sun in Zach Zwinak's, Bill Belton's and Akeel Lynch's respective smiles. The Hoosiers are at least competent against the pass, defending the throw at a clip good enough to earn the fifth-best ranking among Big Ten teams. Penn State's gameplan should be pretty simple: run the damn ball.

Is it really strange that Indiana has only kicked one field goal this entire season? I feel like that's extraordinarily weird. Mitch Ewald hasn't been used once since he made a 26-yarder in the second quarter of the opening game of the season. Coleman is the primary kick returner, but he's pretty docile in that aspect (20.4 yards per return).

As previously discussed, the Hoosiers hosted Missouri with hopes of setting the tone for the B1G campaign, but James Franklin wasn't having that. The dual-threat QB accounted for 404 yards of total offense and three touchdowns. Indiana had no solution for Mizzou's offense whatsoever--200 yards on the ground, 380 in the air--and their Hoosier counterpart couldn't quite keep up. Getting early stops might be the key for Penn State on Saturday.

Finally, the true start to conference play - and the opportunity to size up how the betting market feels about the general strength of the B1G. Here are my very unofficial, off-the-cuff B1G power rankings based on the early season in-conference spreads (and some guessing and fudging on my part). You can get an approximate idea of a hypothetical spread for any two teams if they met on a neutral field by calculating the difference between two teams' "Power" number (i.e. Ohio St -4 vs Wisconsin or Nebraska -3 vs Penn St). 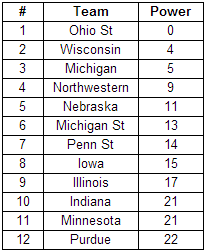 So PSU is a 3.5 point favorite this week at Indiana, which appears to be causing some thoughtful consternation among the fanbase. For this week's pick, let's check in with your idiot buddy RJ, who always uses obscure, meaningless trends over minuscule sample sizes to justify his bets! Whattaya got RJ?

In 1960, Indiana was leveled with major sanctions by the NCAA for recruiting improprieties (free plane tickets, alleged envelopes of cash, etc.). Get this--every varsity sport was banned from postseason play for four seasons. Imagine Emmert pulling that crap last year. Anyway, be glad for those sanctions because it gave us

this amazing paragraph on Wikipedia:

"That year the Hoosiers lost seven games on their own anyway." Beautiful.

Also, it seems this school willfully employed Cam Cameron as its head coach for five whole seasons. The Wikipedia section for "The Cam Cameron Era" is among my favorites on Wikipedia.

The Crimson Quarry. They're already in basketball mode, but there's some good foobaw stuff there too.