Penn State traveled to Bloomington, Indiana, renowned as home of the world's fattest beagle, on October 1st, 2011 for its 5th game of the season. The Lions sat 3-1, with their lone loss coming at the hands of Alabama. Our defense was very good, and our offense was not. No worries, though, because we were playing Indiana.

Kevin Wilson had taken the helm of the Andrea Doria Hoosiers that year, and though his first campaign had begun with just 1 win and 3 losses, those 3 defeats were by a combined 13 points (against some of the worst competition you can imagine, nevermind). Wilson's quarterback for this showdown with Penn State would be sophomore Dusty Kiel. Dusty and approximately 30 other Hoosiers would leave the program during the course of the season. And IU football began its ascent from the ashes.

Dusty Kiel looked like a ringer compared to Penn State's quarterbacking situation. That's because Penn State would start Rob Bolden. Again. Inexplicably. In his true sophomore season, Team Bolden was struggling for answers. Rob was completing not quite 47% of his passes, for 1 TD vs 3 INT. Team Moxie, despite going just 1 of 10 for 0 yards against Bama, simply performed better. The Scranton Scrambler completed 63% for 421 yards, 3 TD's and 0 INTs through the first four games. It didn't even seem to be a contest. 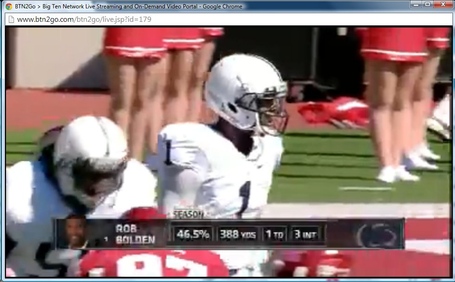 Yet, out came Rob Bolden to start the game. Why bring up what was probably the worst Penn State game of the last 5+ years, against what was arguably the worst Big Ten team of the last 118+ years? Perspective, friends (and, it we had a bye last week). Here comes a big dose of it.

We're gonna get right down to it. Here is a the 2nd offensive snap of the game for Penn State. Our Lions have 8 yards to go for a first down, from the 25. Indiana locks up our receivers in man coverage with a single high safety, and sends a corner on a blitz. 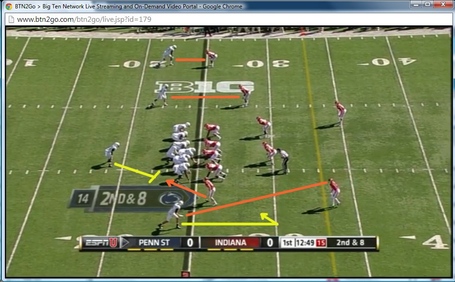 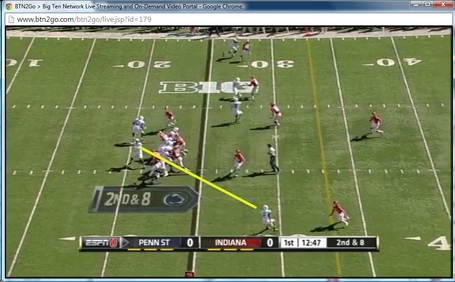 We've placed a yellow "X" on the approximate spot (below) where the ball hits the dirt, in front of Moye's feet. 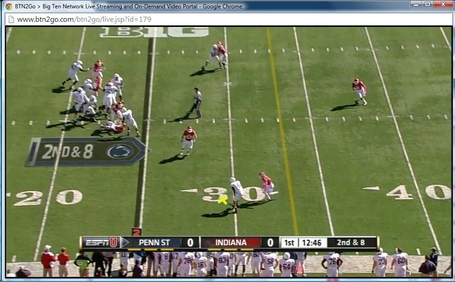 Below is the play in gif form. Moye reminds one of Bill Buckner in the 86 World Series, although in fairness to Moye, the grounder Bolden threw doesn't even go through his legs.

Penn State marched down the field on its first possession. No, seriously. On 2nd and 5, Silas Redd bounced a run outside, and into the endzone for a touchdown! Hooray. Except, TE Andrew Szczerba got dinged for holding. Instead of a confidence building touchdown, the Lions faced 2nd and 15. Galen Hall lost the rock-paper-scissors with Jay, so Jay dialed up an All Curls from the old "21" personnel - 2 backs, 1 tight end, in the I formation. Classic Penn State. 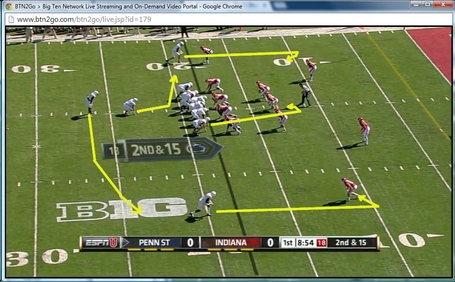 Indiana is in man coverage, and the two safeties are doubling the wide receivers, taking away any inside routes. Indiana's MLB blows the coverage, though, choosing instead to run with FB Joe Suhey, and leaves TE Szczerba wide open. Because, Indiana. 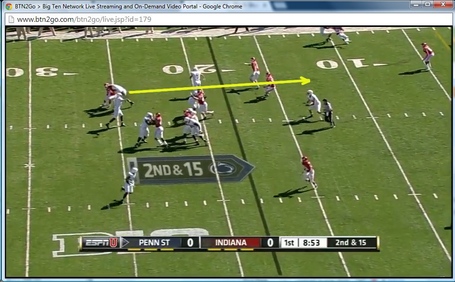 Rob Bolden, from 11 yards away, delivers the ball too high and too outside for the 6'6" Andrew Szczerba. Too high, too outside. For the guy that's 6-and-a-half feet tall, with an effective wingspan of 8 feet. From 11 yards away. Do the geometry on that one. The ball bounces off of the tip of one Szczerba hand, and into the arms of an IU safety. Interception. 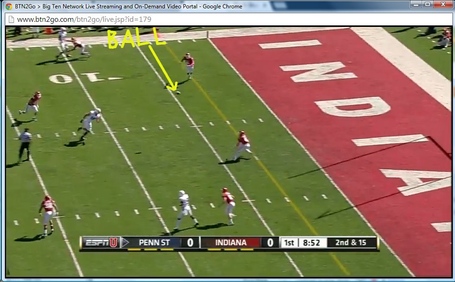 Too high, too outside. From 11 yards away, directly in front of him. The pass was so terrible, that ESPN gave Brian Griese an end zone shot to diagnose. Griese's verdict? "Just not a good throw, there." Indeed, Brian. It was not. 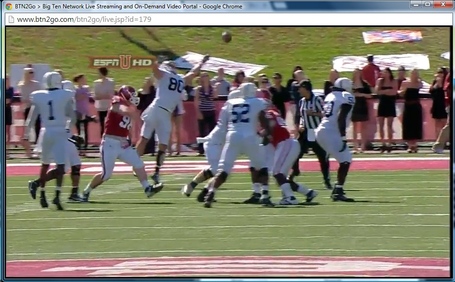 The gruesome detail, in gif form:

Penn State won, 16-10. Indiana was throwing the ball into Penn State's end zone to win on it's last series. This Indiana squad would lose its final seven games, being outscored 326 to 137 over that span, and finish 1-11. Their lone victory came against South Carolina State. Of the MEAC. They were horrible, and by association, so was Penn State's offense.

So, perspective (and, BYE week). Not that we BSDers needed it for any particular reason. But, sometimes it does help you appreciate what you have just a little bit more. Or, what you don't have. And we don't have Rob Bolden. That's really the central message I'm getting at here.

Here are some links to the game threads, if you need to bill a couple of hours on a Thursday: 1st quarter, 2nd quarter, 3rd quarter, 4th quarter, and Ben Jones before he got famous. Oh - and, Chris Grovich. Man, I used to love his sky-is-exploding-then-falling-in-a-giant-ball-of-fire rants. They were the best. To wit:

Frankly, the fact that they're not allowing sacks is kind of irrelevant. Penn State is 103rd out of 120 FBS teams in Pass Efficiency. Why even try to sack these quarterbacks?

Oh yeah - we're trying gifs. Here's one of BOB presenting his lunchtime movie selection. Let me know below if they help the film room or not.