I'll leave most of the Beckman jokes to you guys.

Illinois came into conference play with a smidgen of hope that their team might be able to stay on the field with the upper crust of the B1G, winning three of their four non-conference games. The blip came against a not-awful Washington team led by Keith Price, who threw for 342 yards against the Illini in a 34-24 Huskies win at Soldier Field.

Those hopes were swiftly and aggressively dashed once B1G season came around. In their three conference meetings thus far they've been outscored 137 to 54. A win, or even just a decent showing in Happy Valley this weekend, would go a long way towards inspiring the confidence they'll need to get to six wins.

Josh Ferguson is the leader in both rushing and receiving yards for the Illini, and the latter indicates quarterback Nathan Scheelhaase's tendency to check down. After a couple of big games in the non-con slate, Scheelhaase has had some rather pedestrian outings against Nebraska and Michigan St. (though I suppose the latter could be forgiven). The offense as a whole is capable on its day - in wins, the Illini average 46ppg. They'll feel the burden of not having second-leading receiver and big-play threat Ryan Lankford for the first time this week - the senior was lost for the season with a shoulder injury he suffered against Sparty.

This is where Penn State should find the going much easier this weekend. Tim Beckman's defense has been absolutely porous this year, allowing opponents an average of 33.7 points per contest. Christian Hackenberg should redeem himself in front of the home crowd against a secondary that is giving up just under nine yards per attempt and 238.3 yards per game. But as meh as the Illini are against the pass, their biggest weakness comes against the rush - the defense allows over rushing 200 yards per game, and they've allowed two individual runners to pass that mark.

Taylor Zelewski is 7-10 on field goal duties this season with a long of just 40 yards. V'Angelo Bentley is the danger man on returns, having already recorded a kickoff 100 yards for a score this season. He's also got a 50-yard punt return under his belt this season. Justin DuVernois (I believe that's French) has punted just 28 times this season, a number I expected to be much higher coming into writing this article.

Yeah, you don't want no part of that Sparty defense.

As always, #FollowKunk7. And if you can, I hope you #SupportKunk7.

Ugh, I'm too depressed to even make sorta-funny half-jokes this week. OK fine I'm not that depressed, but at least I can pretend to be. The good news is even after a 49 point loss, Penn State is a 10 point favorite over Illinois because, well, Tim Beckman doesn't deserve nice things? Sure, that seems reasonable enough. Here's my latest back of the envelope power rankings in the B1G. (Remember, approximate neutral site spreads can be obtained by subtracting one team's power score from the other). 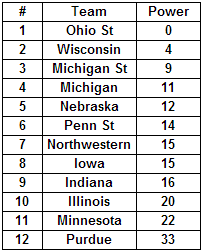 See guys, it could be way worse! Poor, poor LOLermakers. Anyway, OSU and Wisconsin are far and away the best teams in the conference and it's not really close otherwise. The big, gooey center of the B1G is just going to get destroyed in bowl games this year, aren't they? That oughta be fun. Ugh, I'm depressed again.

As for analysis of this week's game, Illinois is coming off a 42-3 thrashing at home against Sparty. So, it's pretty clear we've got two smoking hot teams on our hands. Who to take? Who knows? Who cares? Save your money and buy bourbon or something. The depression is included for free!

I've already linked to it several times, because it's really excellent: The Champaign Room. Already really excited for basketball, I see.