Film Room looks at film for one purpose, and ends up rubber-necking a car wreck.

The last - very last - thing we wanted to do was diagram Penn State's defense. That's why when someone, somewhere, asked about special teams, Film Room jumped all over it. Who even plays on the special teams? How many are run-ons? How does that compare to previous years? Can we draw any wild conclusions about those 2 or 3 fixed data points, and extrapolate them into a full-on treatise?

Well friends - if you can find any footage of special teams plays in which you can see more than 2 or 3 players at a time, please let us know in the comments. What we ended up doing was starting with the Minnesota game film, trying to note the Penn State players on each unit - kick, punt, kick return, punt return, field goal block.

And then it happened. Penn State - led by Zach Ladonis, Pat Zerbe, Brandon Bell, Trevor Williams, and Von Walker - downed a Butters punt at the Minnesota 4-yard line. And this begged the question: how in the world did the Gophers get off their own 4-yard line, and drive 96-yards for a TD?

You are looking LIVE...at Minnesota backed up at its own 4 yard line with a first down (below). Defensive Coordinator John Butler, and most of the football watching world, expects the Gopher to run. the. ball. I'm betting run. You're betting run. The Gopher fans expect run. When a team runs the ball 67% of the time, and 84% of the time on first down, and 100% of the time when they're backed up - anyone with at least 3 synapses per month expects Minnesota to run.

Consequently, Penn State puts a modified "Bear" defense on the field. The Lions stick three 300-lb defensive tackles over both guards and the center. Two defensive ends - Barnes and Olaniyan - are standup edge rushers. And three linebackers - Hull, Carson, and Kline - are stacked behind those 5 D-linemen. Finally, since there is no receiver outside the hash to the top of the screen, CB/S Amos moves in tight, manned up against TE (everyone is manned up, by the way).

The tricky Gophers shock the world by calling a pass, of course. They're sending four receivers out, and flooding the zone to the bottom of the shot below. Six stay in to block, and QB Phillip Nelson should have a simple read. 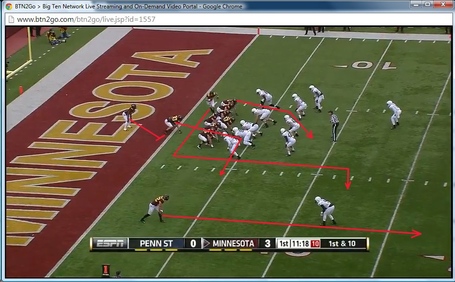 If Minnesota was hoping to hi/low the cornerback, though, they're outta luck. The man scheme forces Nelson to find an open receiver. Worse for Goldy, though, is that Nelson needs to make up his mind quickly. The Gopher line slides to its left, leaving Big Ten Freshman of the Year Deion Barnes with (almost) a free run towards QB Nelson, with nothing but a running back standing in his way. Thanks to the slide and the 6-man protection, Penn State's best defensive player, DaQuan Jones, is blocked one-on-one as well. 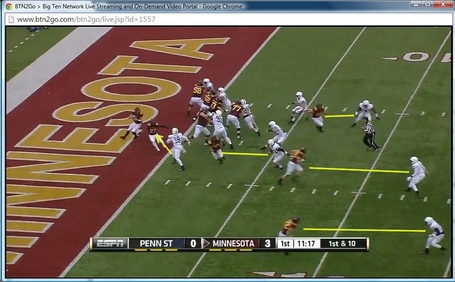 In the shot below, 2 yellow arrows are pointing out 4 things: 1) Deion Barnes gets cut to the turf, losing his battle with the RB; 2) DaQuan Jones trashes the Gopher OT, and is a split second from killing QB Nelson; 3) Nelson throws early, as a result of the pressure. Check the game clock in the screen caps - 2 seconds have elapsed since slide 1 (pre-snap) to now; dude got rid of it in a hurry; and 4) this is further evidenced by the fact that his intended target - the yellow arrow to the right of the shot below - has yet to turn his head around. 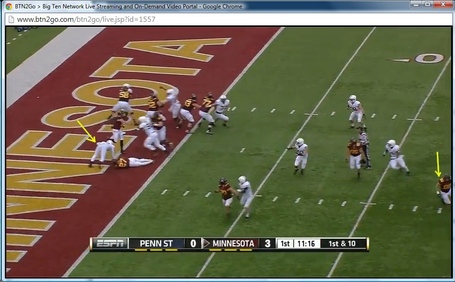 Malcolm Willis, who never turned out of his backpedal, also sees Nelson release the ball early, and undercuts the route, beating the TE to the target. The ball hits Willis in both hands, but falls incomplete. 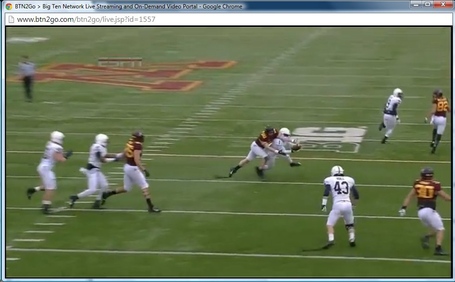 So close to a big, game-changing play. So. Freaking. Close. But that's okay - an incompletion on 1st down is a win for a defense.

Now, still backed up in the shadow of its own goal, but with 2 downs to get 10 yards, and having survived a catastrophe, the Gophers get back to basics - an inside zone run. Lots of red blocking lines below. You can click the pic to embiggen, but the gist is this: covered linemen block the man in front of them, uncovered linemen reach to the 2nd level (our linebackers). Penn State is in its base 43 stack, with an all-zone, 2-deep look. Zone, 2-deep, puts your corners covering the flat, and helps your edge defense if those corners will stick their noses into a pile. Since our corners are actually safeties, they like contact. 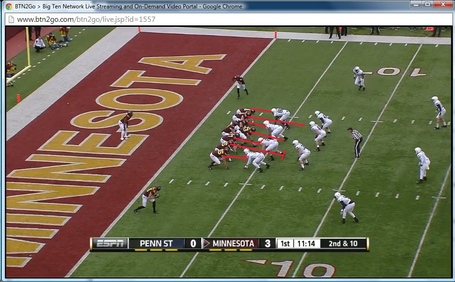 In the shot below, the Gopher back has just received the ball, and two things jump out early - actually, make that two people jump out early: DT Baublitz is three yards deep, and DT Jones has already shed his blocker. The RB is making a cut to the backside to avoid those two as soon as he gets the ball. 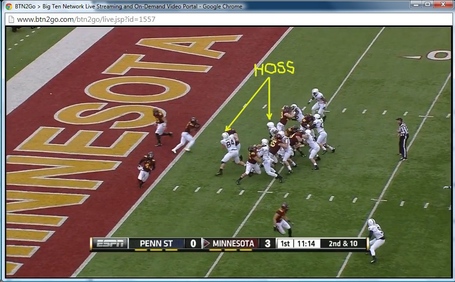 Let's start with the good news: Baublitz has forced the play away, and Jones is just a beast. The bad news is that everyone else who should have been blocked by a Gopher, is still being blocked by a Gopher. But, because of Butler's coverage - which put his corners in the flats - CB/S Amos reads run, comes down hard to the edge, and stuffs the RB for a gain of just a yard and half. That, friends, is another win for the defense. 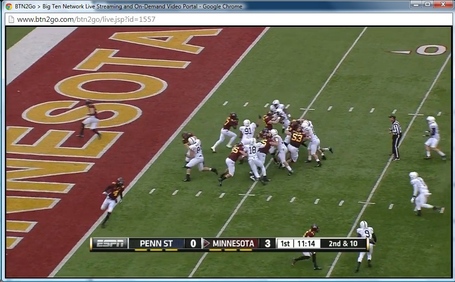 The ESPN graphic in the shot below reads "3rd and 8" - which is outstanding. Minnesota isn't running for 8 yards and a first down. I know this. You know this. Jerry Kill knows this. And John Butler knows this, too. Butler goes with a 42 Nickle defense - 4 down linemen, 2 "linebackers" (Carson and Obeng), and 5 DBs. 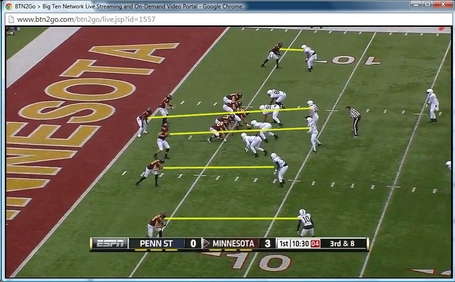 As you could tell by the connecting lines above, and the connecting lines below, Penn State is in man coverage. DE CJ Olaniyan gets around his tackle to the top of the screen, but this is a designed rollout by Minnesota for QB Nelson. There are only 4 receivers into the pattern, because the TE who motioned into the slot has cracked back on DE Deion Barnes and sent Barnes flying into DaQuan Jones. As Nelson starts rolling to his right, has a clear view of all his receivers - and everybody appears to be locked up. Appears. To. Be. 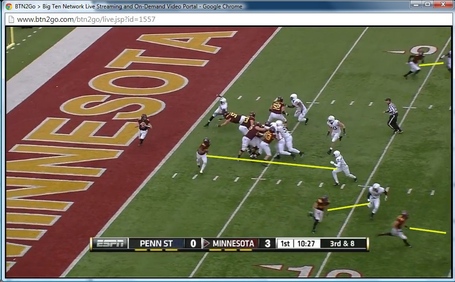 But they aren't. Who isn't locked up? Minnesota's top receiver, #14 Engel. He started split wide right, with Trevor Williams over him. As you can seen from the shot below, Engel hooked up at the sticks, and caught the ball from Nelson. Why is Williams at the Gopher 25, when Engel is at the Gopher 16? I don't know. It could be some kind of hybrid coverage with which I'm unfamiliar. More likely is that Trevor missed a call or blew a coverage, choosing to play deep third while everyone else plays man. It isn't the first blown coverage by a secondary; it won't be the last. But Minnesota takes advantage of this to gain a critical first down. 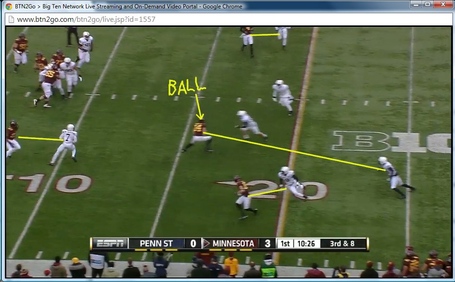 Same drive below, with a first down. Minnesota pulls a guard and runs power to Penn State's right side. The Gophers run the jet sweep motion, but QB Nelson will keep the ball and take it off tackle. Penn State is in its base 43, with "OLB" Obeng as the "slot" linebacker, standing on the Gopher 31. 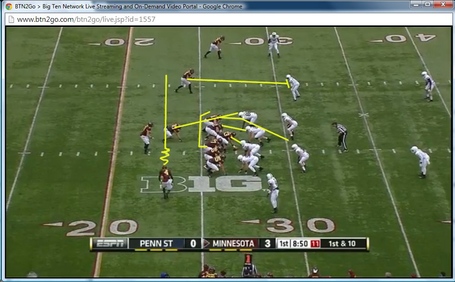 And we're off! Nelson has kept the ball, takes a step or two forward, and has to jump cut away from DT Baublitz, who has again driven his blocker into the backfield and forced the play. That's good. #7 Obeng, #40 Carson, #38 Kline - who played with a torn pec -, and #86 Olaniyan are all blocked. 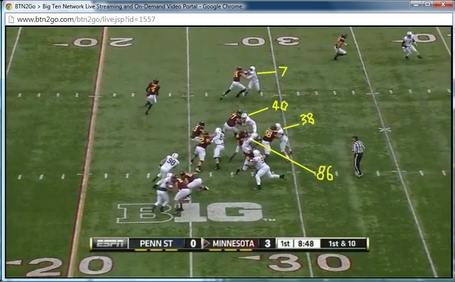 Nelson clears the line (below) after kicking free of Baublitz, and S/LB Obeng is still blocked by WR Engel, at the Gopher 31. 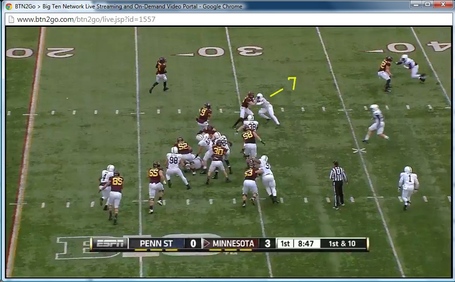 Nelson turns the corner (below), and Obeng is still being blocked, now at the Gopher 34. Nelson runs for 20 yards or so, before he's forced out by Jordan Lucas. Lucas is 2nd on the team in solo tackles, by the way, having played nothing but cornerback all season. 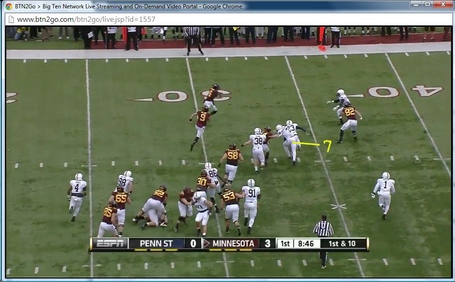 Below is an end-zone shot of the action. Senior linebacker Glenn Carson is reading the play, and sees what is coming. Olaniyan is the white helmet in front of Carson. Olaniyan is not blocked by the OT, but will be blocked by #30, the Gopher fullback. 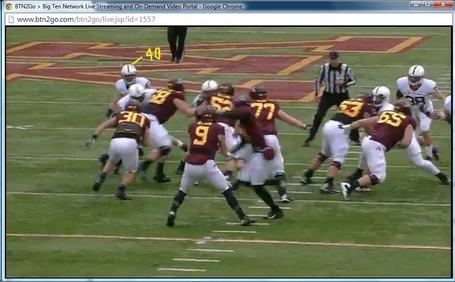 If you're Glenn Carson in the shot below, you're already screwed. You stayed wide because of the jet sweep motion - nothing wrong with that. But now you see the pulling guard, and the QB with the ball, and the massive hole to your inside, because Olaniyan got destroyed by the fullback. 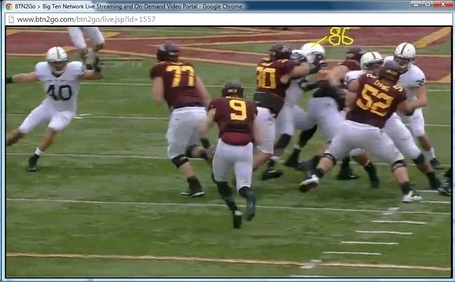 There's simply too much space for Carson to cover by himself, with a 300 lb guard leaning on him. Carson leverages for the inside. That leverage, plus Baublitz 's right paw swiping for his ankles, forces Nelson to bounce it wide. And when Nelson bounced it wide, there was no one else home out there. Obeng couldn't beat the WR's block. 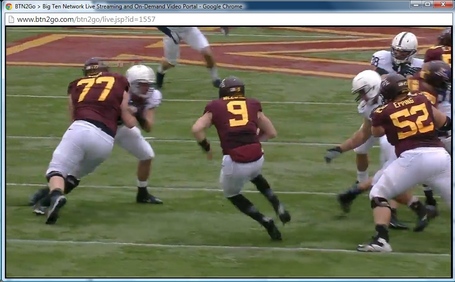 Despite that first down, ~20-yard run from Nelson, our defense has forced another 3rd and long on this same drive - and we're still on the Gopher's side of the field, by the way. It's 3rd and 8 below, and Minnesota needs to pass. A TE/H-back and a WR are going to run crosses/drags in the middle of the field. Penn State is in its 42 Nickle, and is playing man coverage. 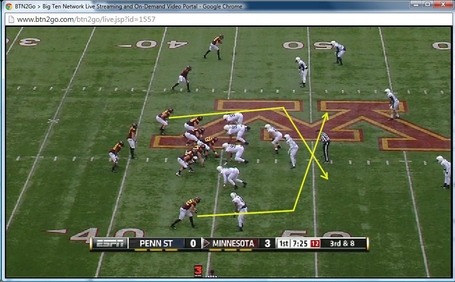 Amos, at the bottom of the screen, and S Keiser on the block "M", are your manned up defenders against the two crossers. Butler, though, has called a double "A" gap, delayed blitz. Pittsburgh Steeler fans have seen Dick LeBeau call this same blitz with their 2 ILB's approximately 7.34 million times, because it usually gets a free rusher right into the QB's face. 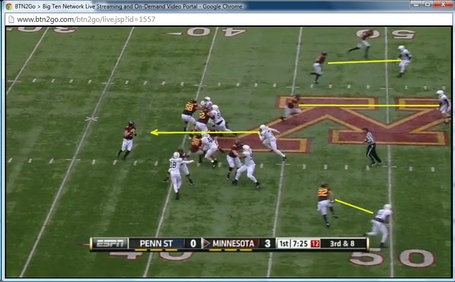 Hey, how 'bout that. Carson sucks up both Goldy's center and Goldy's RB, leaving Obeng with a 3-yard wide hole right into Nelson's face. 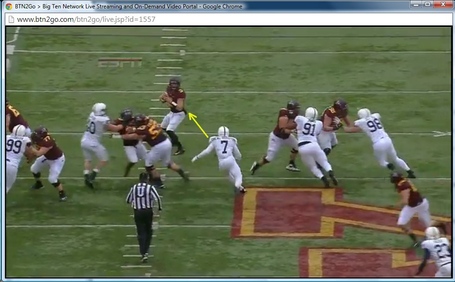 But, in the shot below, Amos is toasted off the ball, beaten badly (or missed his assignment), and has chosen to "take an angle" to where the white speed receiver #82 might end up. The extra frustrating part about this is that with the blitz in Nelson's face, the ball is thrown behind the WR, so much so that he needs to pirouette for the ball, stopping his progress. 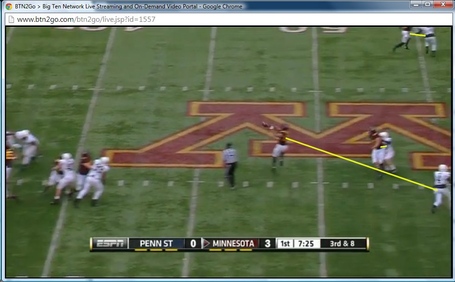 But since Amos chose not to follow him, and instead chose a "pursuit angle" - the receiver gets to complete his 360, restart, and run another 13 yards to the Penn State 38. 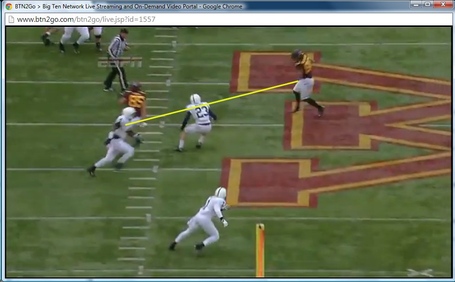 Ready to quit? Nope, you're not allowed. Below is yet another 3rd and long from the same. stinking. drive. In the shot below, we finally get everyone covered. Nelson juuuusssst eludes DE Anthony Zettel, continues rolling right, turns the corner, and runs for 6 yards. 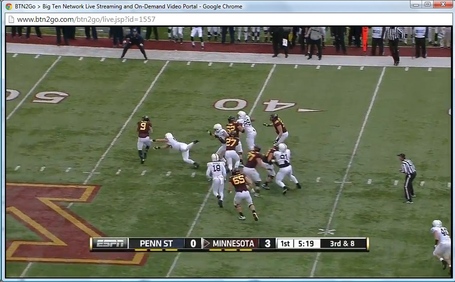 Hooray! That finally forced a 4th down. But since they only had 2 yards to pick up on 4th down, and since the wind was gusting, and since the PSU 28 is sort of a no-man's land, Jerry Kill wisely chooses to go for it. Penn State runs its base 43 with zone coverage. And Goldy calls a play action pop pass to the tight end. Our linebackers are still jumping the 4th down run fake, and Goldy's lumbering TE is streaking down the seam. Great play call there by the Gophers. Two or three plays later, they're in the end zone with a 10-0 lead. 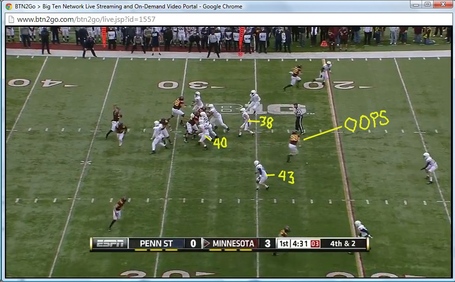 So - about those special teams....