With two weeks left in the 2013 football season, and 15 seniors walking out of the tunnel for the last time this Saturday, Film Room decided to snap a play for each Nittany Lion wearing a blue jersey for the last time - something to remember them by beyond this season.

Because there are 15, we have to split the thank you into two parts. Here are seven in this first installment.

Ty Howle took over the pivot this year and hasn't missed a snap. In the shot below, we have a 1st and 10 against Purdue in the 1st Quarter. We're in the red zone, where everything happens just a little bit faster. We run an outside zone play, and Howle must get to the second level, and cut off the Purdue linebacker. 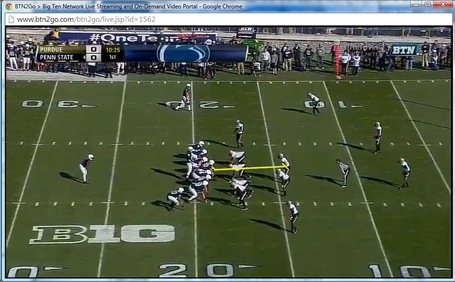 Getting to the 2nd level has always been a specialty of Howle. The soda machine that is Ty Howle has excellent feet. 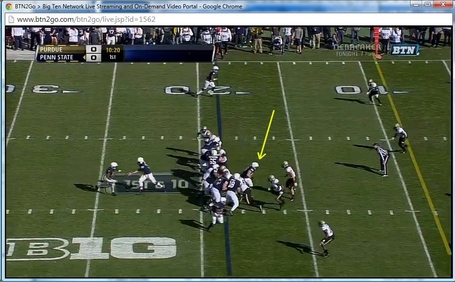 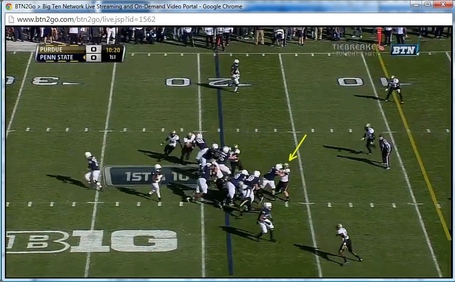 The play doesn't end there, of course. Howle maintains his block, and pins the Purdue linebacker inside, driving the dude completely out of the play. Running back Bill Belton clears 9 of the easiest yards he'll ever make. 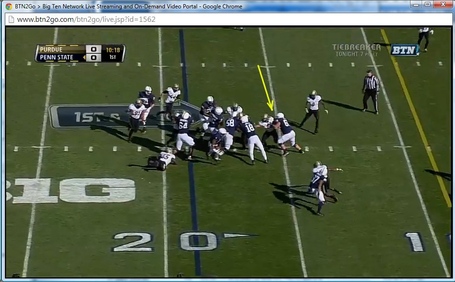 Yes, John Urschel is handy with a calculator. That will serve him well. But Ursch also has quick feet for a larger man. Below, Ursch is the backside guard on a zone play headed away from him. He has to cut off the nose tackle who is on his inside shoulder. It's a very tough block to execute, and most players will "cut" the guy - dive at his knees, roll into him a bit, and hope you knock him down long enough for the back to clear the line of scrimmage.

Urschel doesn't take the easy route, of course. He gets off the ball quickly and engages the Purdue nose tackle. 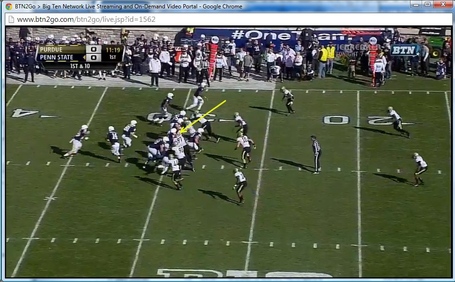 He cuts the corner on the 330lb nose tackle, maintaining leverage while popping his hips and feet around to put himself fully between the NT and Zwinak the ball carrier. It is, again, an incredibly difficult thing to do. And because he's an offensive lineman, his ballerina technique is obscured by a mass of humanity flailing, grunting, and groaning around him in the shot below. 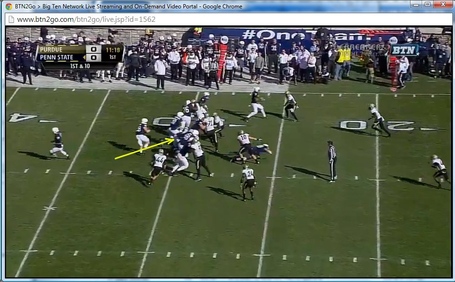 But there's a clear way to tell that Urschel executed the block perfectly. Just look at the shot below. As the arrow points out, the nose tackle is on the ground, and John Urschel, facing the far sideline because he danced himself there on purpose, is putting the finishing touches on the block by shoving the 330lb dude's head into the Beaver Stadium grass, as Zwinak bursts through the hole behind him. 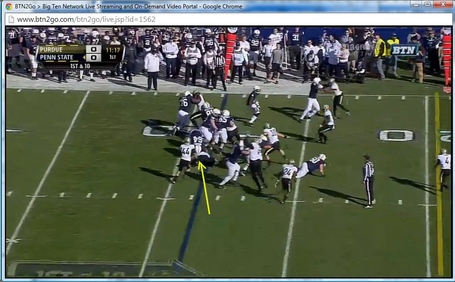 If Adam Gress cared, and I'm certain he doesn't, the play below would probably be the last one he'd choose. Penn State sits with a 2nd and 5, and we're throwing a quick screen to TE Breneman in the slot to the side opposite of right tackle Gress. All Gress has to do on this play, really, is stand in place. 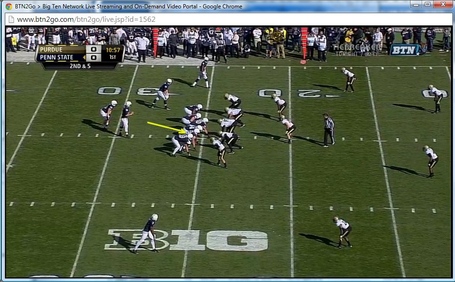 But he doesn't just stand in place. At the snap, he, along with TE James, punch the Purdue defensive end in the face (not literally - well, he punches, but the other guy is wearing a helmet, so it's cool). 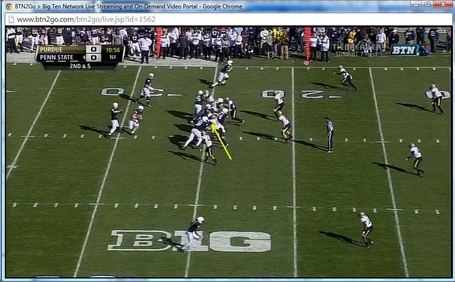 Gress doesn't stop there, though. He engages the DE, and starts driving him down the field. As you may also notice in the shot below, the ball has already fallen incomplete, and TE James has disengaged. 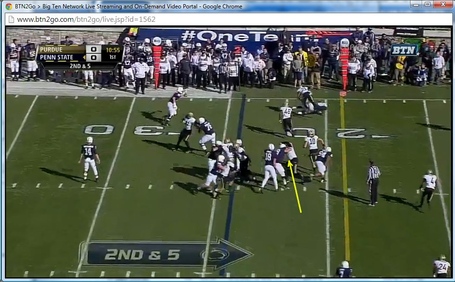 The play is over, the whistle has (probably) blown, but overlooked, under-appreciated, no-complaints Adam Gress is still blocking the Purdue defensive end four yards beyond the line of scrimmage, and 15 yards from where the play began. All of that on a play where, if he had simply stood up at the snap and done nothing much else, no one would complain very loudly. But even on this, the most anonymous of plays - Gress played through the whistle. 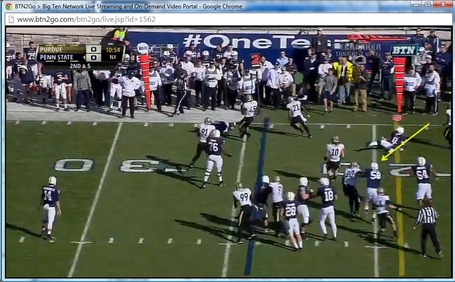 In his sixth game at offensive tackle, Garry Gilliam got the start against the #16 Michigan Wolverines. Welcome to the offensive line, Garry, and thanks for volunteering to move inside from the more glamorous tight end position. In the shot below, Garry is blocking an outside zone run. Since he is uncovered at the snap, he'll be slide stepping to the right, and moving to the second level. 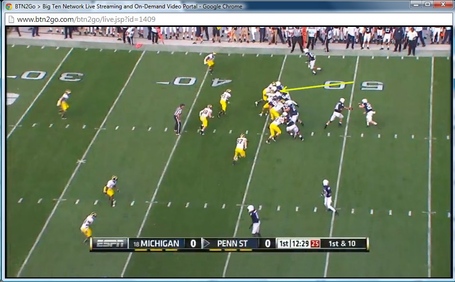 Garry does, with enthusiasm. Unfortunately for him, he doesn't have much time to think, as the Michigan linebacker has read the play and is coming downhill in a hurry. 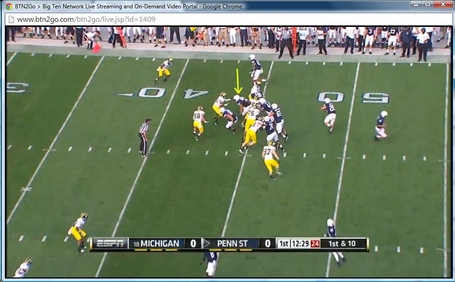 The Michigan linebacker tries to bait Gilliam inside, and then jumps outside. It almost works. Almost. Gilliam adjusts on the fly, and locks on. 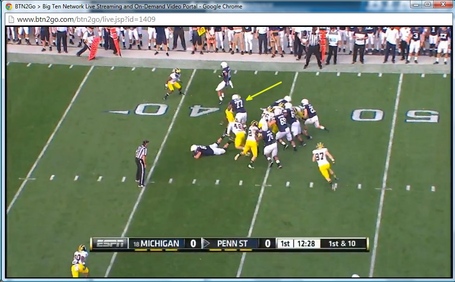 And, as the shot below illustrates, Garry takes the little linebacker for a ride, and doesn't quit until the Michigan linebacker - #15 in the frame - is firmly planted on his ass, looking up at what I can only imagine to be a smiling Garry. 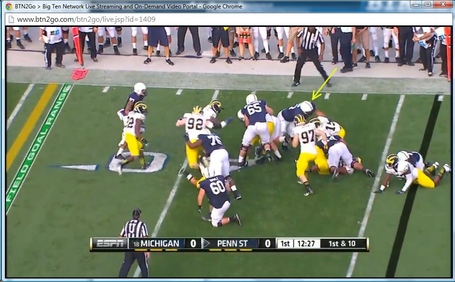 Without sanctions, in a normal year, Kyle Baublitz would have made an outstanding 5-technique defensive end. Seriously - outstanding. But that wasn't in the cards, of course. So Kyle sucked it up and played 1-technique nose tackle, which is probably the most thank-less job on a defense, on - oh - about 80% of the snaps this year.

In the shot below, though, Baublitz is heads-up on a Michigan guard - still not that 5-tech DE, but he's not getting double teamed this play either. And the Wolverines will try running the ball right at him. 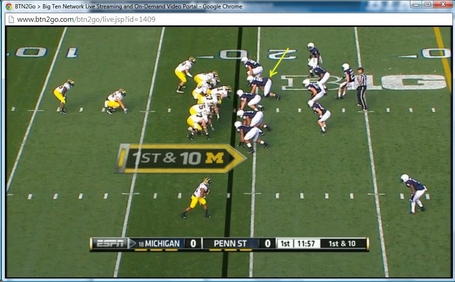 Baublitz bursts off the ball and probably shocks the young Michigan guard with his power. Actually, let's call that a definite, instead of a probable, because Kyle has driven the poor kid 3 yards deep into the backfield after just 3 steps. The Michigan RB doesn't even have the ball yet. 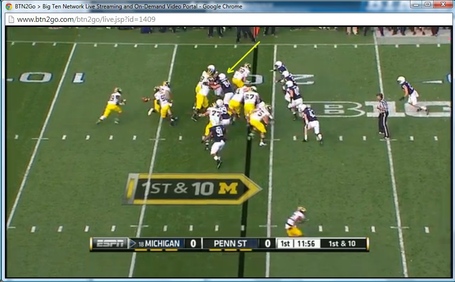 No shot of Kyle Buablitz in action is complete without a still photo of his #84 jersey nearly pulled off his torso. But Baublitz keeps pushing forward, and the Michigan guard continues rolling backward on his skates. 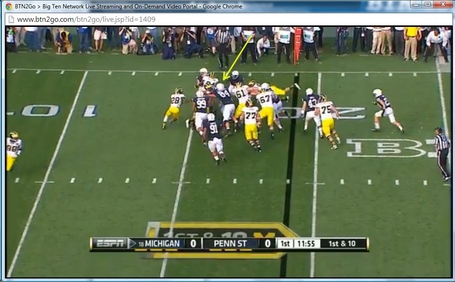 The play ends in a heap, with the Michigan RB tackled for a 5-yard loss. Baublitz made the play, if not the tackle. Why the 2nd yellow arrow? That's to point out where the Michigan guard assigned to block Kyle ended up - that is, on his ass, 6 yards deep. 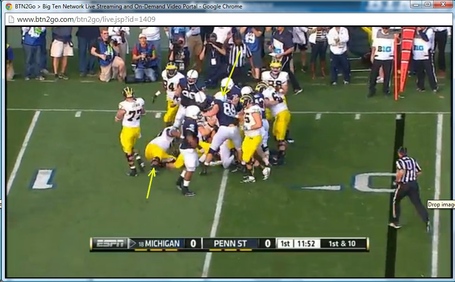 Yep - there are 45 seconds remaining in the game, and Penn State trails by a touchdown. Brandon Felder is split wide at the bottom of the shot below. Penn State sits at its own 34 yard line - 66 long yards from life. 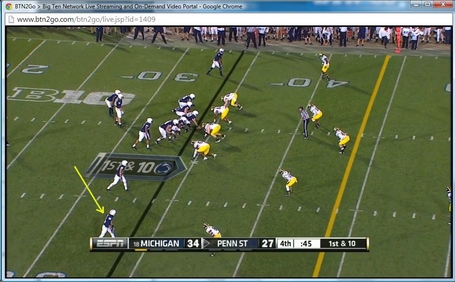 Christian Hackenberg heaves one up to Brandon, who is bracketed low and high by a pair of Michigan defenders. The ball looks like it will be short and intercepted. 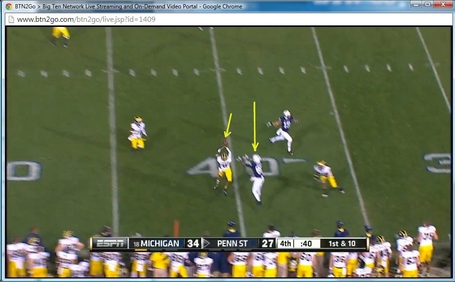 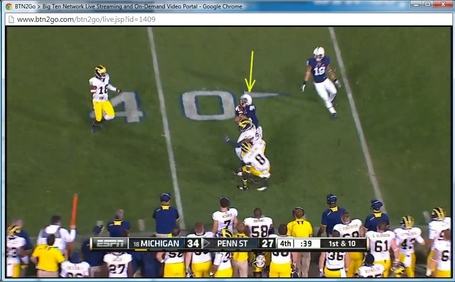 And "secure" is under-selling it. Felder, just as he gets his hands on the ball, takes a wicked shoulder to the back. As shown below, Brandon's head snaps back, whip lashed. But the ball stays squarely in his two hands, and Penn State stays alive. 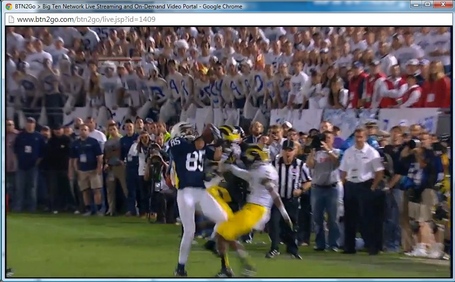 I most remember Pat Zerbe for tattooing a kick returner last season, and again this season as well. But I don't think Pat would mind us bringing up the play below. Yes, it is just another boring zone lead run from 1st and Goal. But it's also the 4th overtime against Michigan. And though he's not carrying the football, Pat Zerbe has had his number called by BOB. 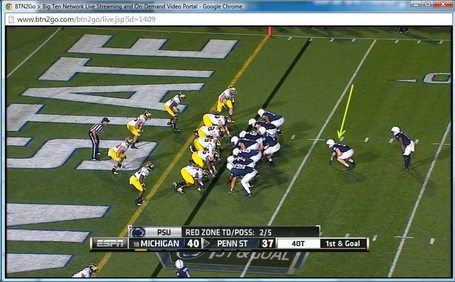 In a zone lead, the fullback has to read the hole in the same manner as the tailback, and lead the tailback through. Zerbe, despite the circumstances, maintains his composure and patiently - in RB terms - approaches the line of scrimmage. The design is probably to go between the tackle (#76) and the tight end (#18), with Pat ramming into the Michigan ILB. 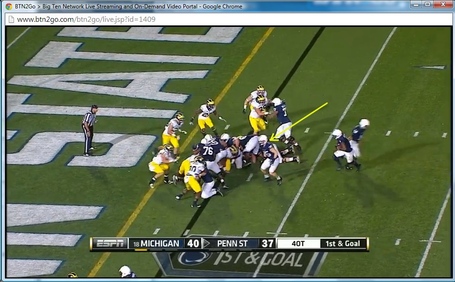 But Pat and Billy Belton read the play the same way. Pat bounces it outside, squaring up with the Michigan outside linebacker who had slipped off of the tight end's block. Belton follows, with a slightly wider arc. 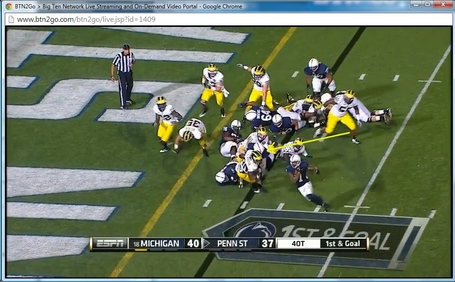 Down goes the Michigan linebacker, with Pat rolling over top of him. Pat's RB crosses the goalline untouched. And pandemonium ensues. 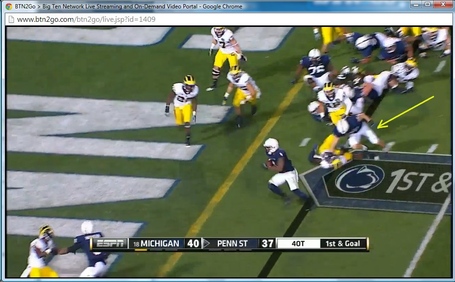 Next week - Part 2, with another 8 seniors on the way.