Let's not waste time; let's get straight to the 800 pound gorilla in the room: Zain Retherford. 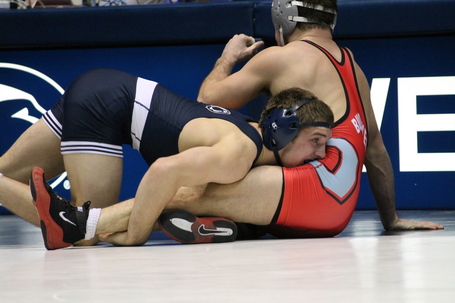 You want that in video form? Sure, we've got that--thanks to GoPSUSports:

At first, Retherford gave up the opening takedown, and it looked like Stieber was going to crank Zain over. 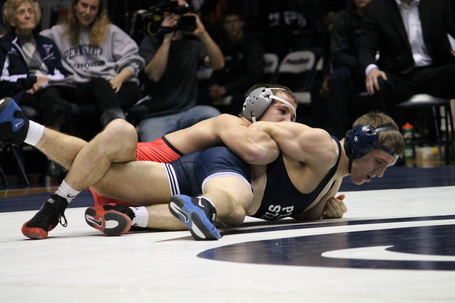 Zain regained his composure, got the escape, and weathered the initial storm from Stieber. Then the young Lion got to do what he does best: grind his opponents into the mat. 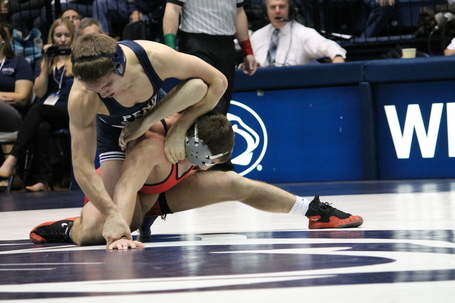 Zain rode out the entire 2nd period, building up 1:07 in riding time, which proved to be the difference as the riding time point tied the bout at 2 and sent it to sudden victory. In overtime, Zain was relentless and sealed the amazing upset victory with a takedown with just under 30 seconds left. Without a doubt, Retherford announced his arrival in the college wrestling world. Now Zain has to deal with teams taking him very seriously, if they haven't spotted weaknesses in his style before, they'll find them soon enough. But for now, congrats, kid; you just beat one of the best pound for pound wrestlers in college.

Nico Megaludis and Ed Ruth both manhandled ranked wrestlers. Nico secured a tech fall over 19th-ranked Nick Roberts, 21-4, and Ed Ruth made his memorable return to the lineup with a 14-3 major decision win over 12th-ranked Kenny Courts. Ed could have won by more but it was obvious that Courts was just trying to not get pinned. Nico was getting the stall calls and Ruth was not. 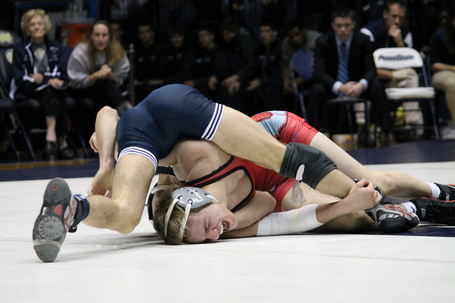 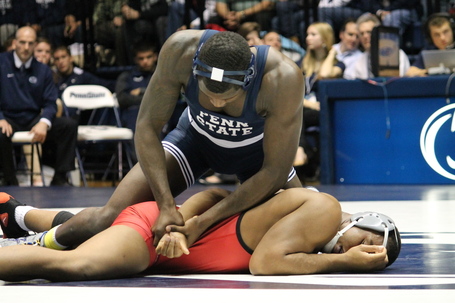 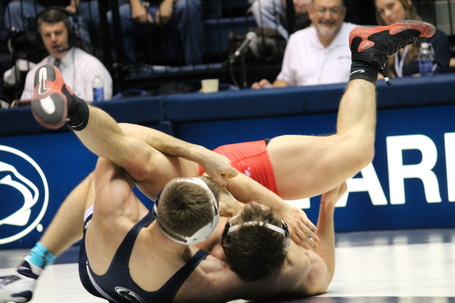 I was unable to get any good shots of Taylor's lightning quick ankle picks because... well... David Taylor (Photo:BSD/Galen)

If it were not for the Retherford upset, we probably would be talking about the impressive win by Zack Beitz over Ian Paddock at 149--and if Beitz didn't have to immediately follow Retherford, the crowd would have probably appreciated the win a little more. Beitz, who basically moved up one spot from his natural weight, beat a ranked opponent and Paddock is no slouch. Beitz used a 2nd-period takedown and reversal and held off all of Paddock's 3rd period offense. 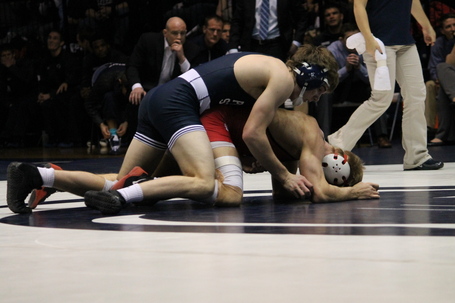 James Vollrath couldn't quite get the extra takedown to secure the major but was pretty dominating nonetheless. Penn State fans should be happy guys like Vollrath stick around to give the Lions depth. James could probably start for a lot of teams if he left PSU when the Altons arrived. 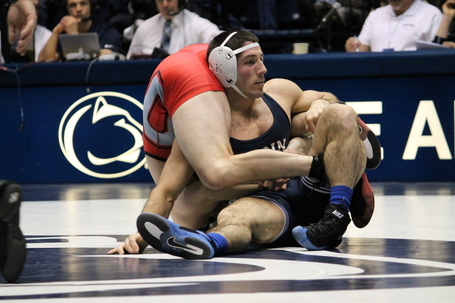 Even Penn State's two losses where nothing to be ashamed of. Jimmy Gulibon lost to 6th-ranked Johnni DeJulius 3-2, and Wes Phipps lost to 5th-ranked Nick Heflin 3-1. Gulibon still needs work on bottom as he got rode out the entire 2nd period although it looked like he escaped at one point from my perspective but... Big Ten refs. Phipps was basically up two weight classes to take on Heflin and was just not strong enough to finish his shots. The more I watch Phipps the more I'm impressed with him. #3 Morgan McIntosh probably could have gone if Penn State needed him, but with the score out of reach why risk it? I saw Morgan on my way out of Rec Hall and he looked fine.

This was by far one of the most complete wrestling matches I've seen Penn State wrestle in a long time. Every wrestler to a man was aggressive and it appeared that every Lion had gas left in the tank at the end of their bouts. I think Retherford had a lot more energy than Stieber, especially in overtime. You have to feel good about your team when backups are knocking off ranked wrestlers. Granted, OSU was wrestling banged up but they were thoroughly dominated in all aspects Sunday afternoon. Now comes the real test, when Penn State travels to Carver-Hawkeye to take on Iowa in the Twitter Fight.

Up Next: the TWITTER FIGHT! live at Carver-Hawkeye Arena - Saturday, Dec. 21, Iowa, 9 p.m Broadcast on BTN