"We're not selling out Carver-Hawkeye Arena for wrestling like we used to do. I don't know if it's the recent title drought, the fact that none of our wrestlers between 149 and 285 ever take an offensive shot, or if it's the you-know-what: meth. Probably the meth. We've got some talented, talented cooks in this state. I've struggled to put the pipe down myself, and it has devastating consequences. No - not meth mouth. I mean, yes, meth mouth is a side effect. But the consequences I'm referring to is that contract I handed to Kirk Ferentz when he told me the KC Chiefs wanted him. The meth made me paranoid, and I fell for it."

As Barta paused, someone from the back of the media room yelled out a single word: "Lickliter"

"Yep - good call. I think you're right, from what I can remember of it. But what we're after here," Barta continued, "is a fun promotion. Whether it's the mostly boring team we have, or the meth keeping people away, I think an old fashioned disco showdown will get the Iowa fans back in their Carver seats - until they just gotta stand and boogie! Woooooo!" With the shout, Barta emerged from behind the podium to reveal his polyester leisure suit, and what appeared to be 6-inch platform shoes with goldfish in the heels, as a hidden DJ cranked up Carl Douglass' classic, "Kung Fu Fighting". 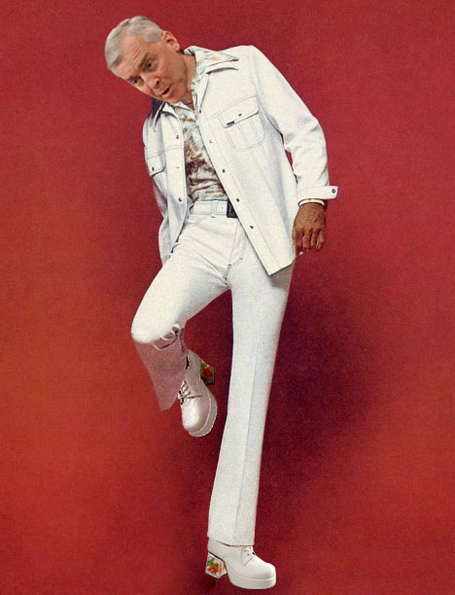 "We're calling it 'Friday Night Fever'. Who's got the best 'hustle' in Iowa City? Tommy Brands, or Dan Gable with his new plastic hip?," yelled Barta, as he struggled to lift the 20-lb shoe in a karate kick. "You heard me right, fans! Both Tommy and Coach Gable have agreed to compete! Dan said he still had the perfect suit in his closet - the old man's a hoarder. They both jumped on board when I said they could choose their own dance tunes. Tommy's gonna rock Thelma Houston's "Don't Leave Me This Way", and Dan will be getting down to what he called, 'a groovy KC and the Sunshine Band medley'. After that, they'll both officially declare a disco war, and then it's up to them to keep up with the DJ's vinyl, and to win the crowd. And I'll let you in on another little secret: I'm feeling some Robin Gibb comin' our way, folks!"

With that, Barta shuffled off stage, strangely performing a "raise the roof" move, and cutting short all questions with a simple "1-2-3-4, I declare a Disco War" answer.

UPDATE: The Iowa Athletic Department released a brief message after this article went to print. "The promotion for Friday night's wrestling meet with Penn State is to be "a blackout" - please wear black clothing. The blackout is not to be confused with Kinnick binge drinking, or Director Barta's Disco party, which was a regrettable error. There will not be a disco party during intermission. AD Barta was confused by a Sigma Chi - Tri Delt social."

[Credit Galen and Nick for the photoshop skillz.]