Penn State's futility streak reaches 11 games as their chances for a win become slimmer and slimmer.

In recent weeks, Chambers has hinted at switching up the rotation amidst this losing streak. He did last night as walk-on Alan Wisniewski received his first real action of the year, playing 17 minutes. Honestly, he was arguably PSU's best player as he finished with 6 points and 8 rebounds (6 offensive). Usually getting an unlikely contribution like that off the bench can put a struggling team over the top with a win.

Not this team, as Penn State fell 53-67 to the not-so-good Nebraska Cornhuskers. The 0-18 watch continues full steam ahead, as KenPom's numbers give PSU a 57% of losing out the rest of the way. 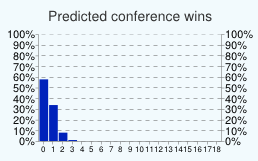 Penn State fans might want to start to brace themselves for the analyses of just how bad this team has been, especially on offense. They once again shot the ball into oblivion and scored at a paltry 0.83 PPP. We haven't focused too much on the tempo-free metrics this year at BSD, but it's probably better we haven't.

Last night was their 6th conference <36% eFG% shooting performance. The worst shooting team in division-1 hoops this year averages 38.9% on the year. Penn State's shooting 38.8% eFG% in Big Ten play and 42.2% on the season (331st). Obviously when you score at such dreadful rates, you are not going to be competitive.

Nebraska played thoroughly unimpressive basketball, shooting a lousy 38.0% eFG% themselves, but they were able to still score over a 1.0 point per possession thanks to PSU's fouling habits. Once again, fouling was a big issue for the Lions who were whistled for 28 fouls. While PSU was actually effective earning chances from the charity stripe (32 FTA), they gave it right back to Nebraska who attempted even more (41 FTA).

DJ Newbill led the way with 17 points, but that came with <30% shooting and 5 turnovers for 78 ORtg. Jermaine Marshall came off the bench as an apparent motivational tactic and finished over his average with 16 points, but also shot just 30%. Everything else was same old, same old. Ross Travis grabbed 13 rebounds, but fouled out after 27 minutes. Brandon Taylor went scoreless after being saddled with foul trouble (4 fouls in 13 minutes).

Only 7 regular season games remain for Penn State to try to get that elusive win. However, four of those contests will be on the road, and two of them come against top-5 Michigan. According to KenPom, PSU only has two games remaining where they have at least a >10% chance of winning - the next game at home vs Iowa, and their second to last game on the road at Northwestern.