This week surely didn't disappoint in the Big Ten with three overtime games and thrilling matchups between the league's top heavyweights. 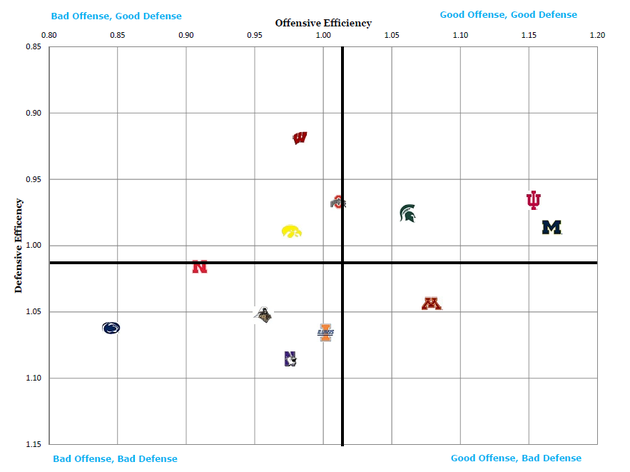 The biggest road win in the conference race was Indiana earning a solid road win against the Buckeyes. But they were upset against Illinois, so that's somewhat a wash. Only other conference road wins were Purdue over PSU, MSU over Purdue, and Illinois over Minnesota. Michigan can get right back to the top of the race with a road win in the Breslin Center this Tuesday night during rivalry week.

THIS WEEK: vs Michigan (Tuesday), at Nebraska (Saturday)

I had the Spartans fourth in these rankings last week, and now they're at the top by default. The other four Big Ten contenders all split games with each other, while Michigan State was able to take care of business against two middle-of-the-pack teams. They have a monster showdown with in-state rival Michigan at home on Tuesday. With a 3-game stretch of vs Indiana, @ Ohio State, and @ Michigan following this week, the Spartans would be wise to hold serve at home against the Wolverines.

THIS WEEK: vs Nebraska (Wednesday), vs Purdue (Saturday)

The Hoosiers inexplicably blew a double-digit lead in Illinois, losing on an embarrassing blown assignment on defense that allowed Tyler Griffey of all people to cement his place in Illinois basketball history. The Hoosiers did bounce back admirably with a complete performance in Columbus yesterday, however. They shouldn't be challenged this week, but their last five games will be significantly harder.

THIS WEEK: at Michigan State (Tuesday), vs Penn State (Sunday)

Michigan had quite the week, participating in two of the best games so far in the college basketball season. They were able to pull it out at home against the Buckeyes, but couldn't win at the Kohl Center yet again. Their brutal four game stretch ends with an in-state trip to East Lansing Tuesday. It's their last imposing road-trip in the Big Ten, however, and if they could pull off the victory, they could be the team to beat down the stretch.

THIS WEEK: at Minnesota (Thursday), vs Ohio State (Sunday)

It might've taken three extra overtime periods, but the magic of Kohl Center yielded two more nice wins for Wisconsin. Ben Brust's miracle will live on forever for sure, but it helps Bo Ryan remain in the hunt for his 12th straight, top-4 finish in the Big Ten. Interesting road game at the Barn this week against a Minnesota team with their backs against the wall.

THIS WEEK: vs Northwestern (Thursday), at Wisconsin (Sunday)

The Buckeyes were quietly going about their business entering this week and were in position to really make a charge at the top this past week. But they lost a heart-breaker in Michigan and weren't able to rebound against the Hoosiers at home. Suddenly it seems the Buckeyes don't have a prayer for the championship. They have an opportunity to make a statement in Madison next weekend though.

THIS WEEK: vs Purdue (Wednesday), at Northwestern (Sunday)

Not sure any team had as big of a week as the Illini, who suddenly revived their NCAA hopes with the huge upset of #1 Indiana at home. Just as important though, they avoided a letdown and got a quality road win in Minnesota. They have a great chance this week to solidify their postseason hopes.

THIS WEEK: at Penn State (Thursday), vs Minnesota (Sunday)

The Hawkeyes really could've gotten right back into the thick of the NCAAs if they were able to pull off the upset in Madison. Instead they lost a heart-breaker in double overtime, leaving themselves some work to do. They still have a favorable schedule down the stretch with two winnable games this week.

THIS WEEK: vs Wisconsin (Thursday), at Iowa (Sunday)

The Golden Gophers have continued their struggles after a good start in the league play. They've lost 6 of their last 8 and suffered an inexcusable loss yesterday at the Barn to the Illini. Their inconsistency on offense is maddening as they weren't able to score 60 points in either of their losses this week. It's up to Tubby Smith to get his team turned around before it's too late.

THIS WEEK: at Illinois (Wednesday), at Indiana (Saturday)

The Boilermakers briefly ended their slump in State College, but weren't able to stay with MSU at home. They shot just 1-15 from behind the arc this week as a team. Two tough road-trips upcoming for Matt Painter's team is not what the doctor ordered.

THIS WEEK: at Ohio State (Thursday), vs Illinois (Sunday)

THIS WEEK: at Indiana (Wednesday), vs Michigan State (Saturday)

The Cornhuskers had this past week off until their Saturday night win over lowly Penn State. Pray for them this week as they face the two conference leaders at the moment.

THIS WEEK: vs Iowa (Thursday), at Michigan (Sunday)

It was another week full of 'welp' for the Nittany Lions, as they really didn't show up and take advantage of their best remaining opportunities for a conference win. Pressure's on from here on out as that's the only interest remaining with this team.