There once was a time this conference season is we ever thought anyone would catch Michigan in the efficiency ratings, but their struggles in the past two weeks have brought them down to earth. After a slow start in conference play, the Hoosiers seem to be hitting their stride and have bounced back remarkably since their loss at Illinois. 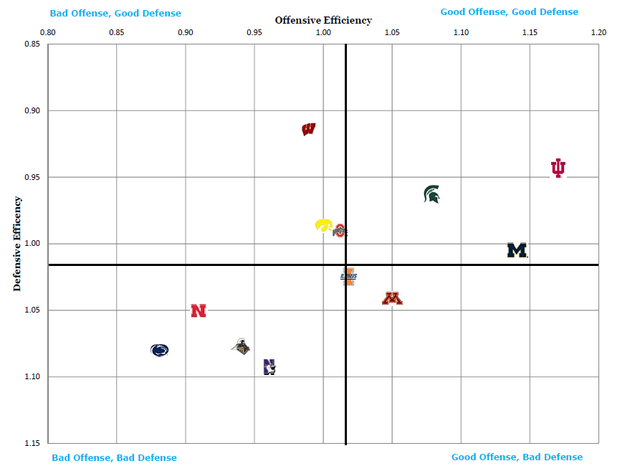 Pretty uneventful week in the Big Ten as far as game-changing road wins. Only Michigan had a legitimate chance to shakeup the conference race but were thwarted by the Spartans at the Breslin Center. While it might seem like a two horse race at this point, both MSU and Indiana have daunting road-trips remaining, while Michigan only faces PSU and Purdue away from Crisler arena. Wisconsin had a chance to stay in the hunt at Minnesota but faltered in overtime at the Barn. Only MSU over Nebraska, Iowa over PSU, and Illinois over Northwestern were your road winners this week.

THIS WEEK: vs Indiana (Tuesday), at Ohio State (Sunday)

The Spartans made an impressive statement Tuesday night, obliterating their in-state rivals 75-52 that was worse than the score indicated. They #BEATEMDOWN the Wolverines and looked damn good doing so across the board. They now get their 2nd shot at Indiana for a chance of sole possession of first place in the B1G Tuesday night. Don't overlook that crucial roadtrip to Columbus over the weekend, either.

THIS WEEK: at Michigan State (Tuesday)

The Hoosiers rolled over their two lesser opponents this week in Assembly Hall, as they prep for their stretch run at the regular season Big Ten title. All eyes are now on Victor Oladipo's sprained ankle after he twisted it over the weekend vs Purdue. His status will be a huge factor heading into the Michigan State showdown.

THIS WEEK: vs Illinois (Saturday)

The Wolverines have past through the storm of their schedule, but it's hard to say they remain intact. After the brutal beatdown against MSU, the Wolverines didn't look particularly impressive at home versus Penn State. Not once did they lead by double-digits against the Lions, and their defense continues to get worse as the season wears on. They need Jordan Morgan to return to 100% so it's safe to say John Beilein will welcome their week off.

THIS WEEK: at Northwestern (Wednesday)

The Badgers were really close to sending Minnesota into despair, but a key Mike Bruesewitz turnover near the end of regulation gave the Gophers new life in overtime. While they weren't able to notch a quality road win, they returned home to put on a clinic versus the visiting Buckeyes.

THIS WEEK: vs Minnesota (Wednesday), vs Michigan State (Sunday)

The Buckeyes were exposed over the weekend by Wisconsin. Ohio State has suddenly lost 3 of 4 and continue to struggle finding consistent offense from anyone not named DeShaun Thomas. They have an important homestand this week to get back on track. A win versus Michigan State will go a long way for their confidence.

THIS WEEK: vs Penn State (Thursday), at Michigan (Sunday)

Remember when the Illini were reeling at 2-7 in the conference? Ever since their miracle comeback against Indiana, John Groce's team has rattled off four straight wins to rejuvenate their season. They rolled this week with two 20+-point beatings. They seem to be finding their stroke at the right time and still have home games remaining vs PSU and Nebraska.

THIS WEEK: at Nebraska (Thursday)

The Hawkeyes took advantage of their easier schedule, picking up a needed road win in State College and drubbing the Golden Gophers at home. Iowa is firmly on the bubble, but as long as they beat who they should (they still have 2 games against Nebraska), Iowa will be in good position come March.

THIS WEEK: at Ohio State (Wednesday)

Minnesota was able to hold off Wisconsin at home for a much-needed win, but followed that performance with an astonishing loss at Carver-Hawkeye. It wasn't so much the loss itself, but how they were dominated after jumping out to a 21-5 lead. Iowa out-scored the Gophers 67-30 the rest of the way. After what seemed to be a promising year, the pressure rises on Tubby Smith and the Gophers.

THIS WEEK: vs Northwestern (Sunday)

Purdue is a young team, and they have a promising future ahead of them, especially with AJ Hammons manning the post (for as long he's there), but this slump they're currently in has been something else. They've lost 5 of 6 and haven't been competitive in any loss. The Boilermakers' defense is currently the third worst in the league, just barely ahead of PSU and NW. Not a memorable year in West Lafayette by any means.

THIS WEEK: vs Wisconsin (Wednesday), at Purdue (Sunday)

The Wildcats took a devastating blow when it was discovered that senior forward Jared Swopshire was going to be out for the year. Without him and Drew Crawford, the Wildcats become evern thinner and are limping to the finish of this season. They had a dreadful performance at Illinois, only scoring 12 baskets as a team, some of which were in garbage time. Interested to see what happens to Carmody, who has a promising cast of young players but also hasn't had a winning conference record in 13 years.

THIS WEEK: vs Iowa (Thursday)

The Cornhuskers didn't have much of a chance this week with their schedule, but they could've given MSU an even tougher contest if Ray Gallegos didn't go 0-13 from the field. They have a chance to be a roadblock to Iowa's dancing chances this Thursday.

THIS WEEK: at Illinois (Thursday)

Penn State is down here because obviously they haven't won a game, but they played much better basketball than either Purdue or Northwestern this week and maybe even Nebraska. However, 3 of their next 4 on the road, so who knows when this team will come up with a win.