Share All sharing options for: Wrestling Wreport says goodbye to the seniors

Penn State wrestled in front of the home crowd for the last time this season and they sent the fans home happy, shutting out Rider 48-0. It was the last home dual for two Nittany Lions as Bryan Pearsall and Quentin Wright stepped on the blue and white mat for the last time. Both finished strong, with Pearsall getting the pin and Q getting the 12-4 major decision. Both came to Penn State with completely different outlooks; Wright was highly rated recruit, Pearsall was a walk-on--but both made the most of their Penn State careers. Wright is looking to become a four-time All-American and 2 time national champion, while Pearsall is looking to make it to the NCAAs for the first time in his career. 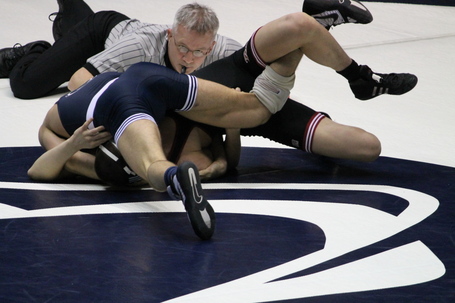 Nico started the dual off strong, taking Skinner down 4 times in the first period to take a 8-3 lead after one. Skinner got an escape to start the 2nd but Nico quickly took him down and started working for the pin. Megatron finally got the fall at the 3:48 mark to give Penn State a quick 6-0 lead.

The newly ranked Jordan Conaway looked liked he deserved it, majoring Shupin. Conaway broke open a close 2-1 1st period lead, getting 3 takedowns and 2 nearfall points to take a 10-4 lead. After an escape, Conaway forced a stalemate on a Shupin shot and then notched 2 more takedowns after the restart. Jordan added 3 nearfall and, with the bonus point for 3:19 in riding time, won 19-5. 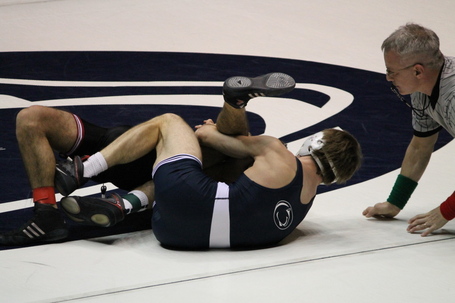 Pearsall got a quick takedown, locked up a cradle and decked Cigna in just over 2 minutes. For what Bryan lacks on his feet he more than makes up for with a strong ride. He looked like a miniature Ed Ruth*. 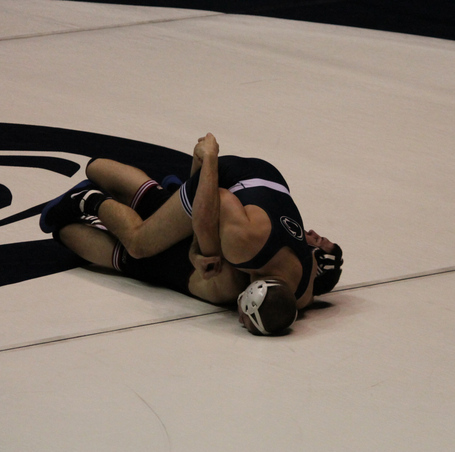 When is a pin not a pin? When the ref doesn't call it so. That pic definitely looks like a pin to me. Anyhow, AA looked better this week, majoring Delia but more importantly getting two takedowns late in the 3rd for the 12-4 final score. That's a very good sign to Alton fans, it looks like Andrew and the coaches are solving his 3rd period (and sometimes 2nd period) exhaustion woes.

Dylan cruised to a 5-2 win thanks to two takedowns and an escape. Alton tried adding more in the 3rd, but Cibula was content on just losing a regular decision and never really tried any offense until there were 17 seconds left in the match. Alton's not the big scorer his brother is but he's at least very consistent. 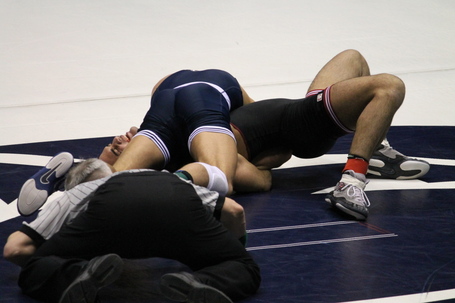 Fortunately for Rider, they had one ranked wrestler. Unfortunately for Rider, that wrestler was at David Taylor's weight. It looked like we would see a good match as Santiago came out firing and got the bout's first takedown, but this is the Unicorn we're talking about and it didn't take long for Taylor to get the reversal, rev up his strong ride and get two stall calls. Taylor only led 3-2 after one but it didn't take him long to lock up the cradle and get the pin early in the 2nd. 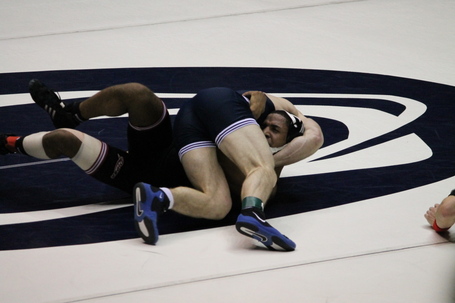 Brown and Brundage traded shots early with Brown getting two takedowns but giving up a locked-hands call while trying for the turn. Brown then got a late-period takedown and led 6-3 after one. Brown quickly escaped to start the 2nd and notched another takedown, but this time cranked Brundage over for the fall.

It took Ed Ruth less than 15 seconds to get the initial takedown. It took Ruth less than 1:00 minute to get two more takedowns and lead 6-3--so you can see why Rider's Ryan Wolfe would be a little frustrated at this point in the bout, but the one thing you don't do is take your frustration out on Ruth.

Wolfe did just that with a little extra shove as the two went off the edge of the mat. This angered Ed Ruth. When Ed Ruth gets mad Ed Ruth pins your ass, just like this: 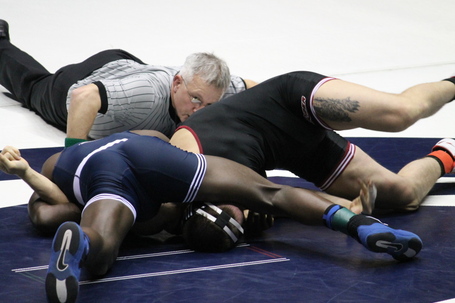 Do NOT anger the Ruth, you can't handle it. Photo:BSD/Galen

Wright tried to go out with the same bang Pearsall did, but it was not to be. McNeil was trying to stay off his back and got called three times for stalling. It was frustrating for Wright because he couldn't get any turning combination and as soon as Quentin would go for the upper body lock he loves, McNeil would back out. Wright would have to settle for a 12-4 major decision for his swan song and leaves Rec Hall with an impressive resume. Wright is 11th all-time in Penn State history with 26 career pins. He's 15th all-time in NCAA tournament history with 13. He's became only the 20th wrestler to become a three-time All-American for Penn State. Thank you Quentin Wright, we will miss you. 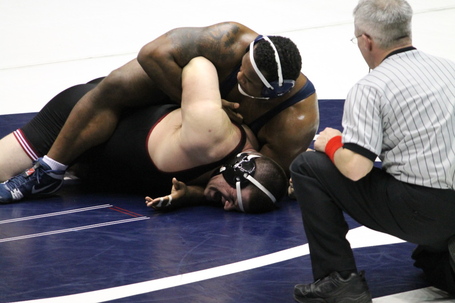 It appears that Jimmy Lawson is the new starter at Heavyweight as this is his third dual in a row. Lawson won in typical shaved bear fashion, getting a reversal and piled up 3:46 of riding time to take on the extra point and win 3-0. Nothing spectacular but a solid win nonetheless.

*this in no way was a derogatory statement about Ed Ruth, but rather a nod to his awesomeness. I never intend intentionally or otherwise to anger the Ruth. I can't and never wish to handle the Ruth.