The Hoosiers gained control of the conference with a pivotal win in East Lansing last week.

There's only two weeks of Big Ten regular season hoops remaining, and Indiana has separated themselves as the class of the best conference in basketball. They've been efficient on both ends of the floor, holding the league's best offense and third-best defense. Wisconsin's league-best defense is insane when you consider their schedule, which I'll elaborate later. And Penn State, despite being win-less in the Big Ten, actually has a better efficiency margin than plummeting Northwestern by 0.0017. 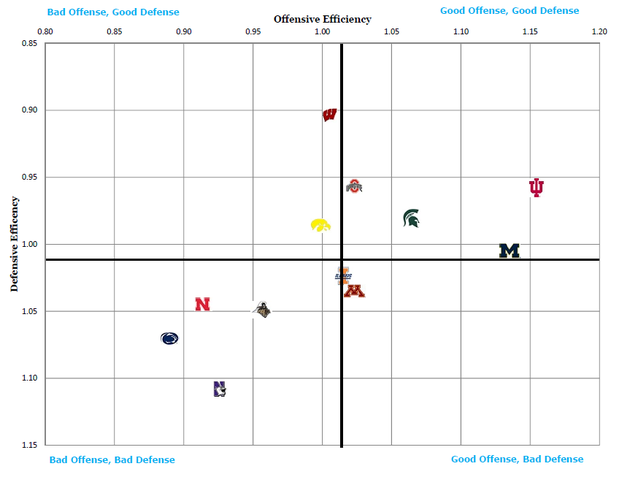 Indiana's road win at the Breslin Center has given the Hoosiers a commanding lead heading into the stretch of the Big Ten race. They do still have 2 road games remaining, but if they can defeat slumping Minnesota this week and hold-serve at home, you're looking at the 1-seed in the Big Ten tournament.

THIS WEEK: at Minnesota (Tuesday), vs Iowa (Saturday)

After a resilient comeback on the road in a hostile East Lansing, Tom Crean's Hoosiers are back at the top. With a 2-game lead on the rest of the conference, IU can all but seal the title this week. But two games against teams that are fighting for their NCAA lives could cause some surprising drama if Indiana isn't prepared.

THIS WEEK: vs Nebraska (Tuesday), vs Purdue (Saturday)

Wisconsin deserves to be 2nd after a stat was brought to my attention on twitter. Sure they had a breeze this week with just a cakewalk road-trip to Evanston, but this ranking is for their overall Big Ten performance thus far. Their league-best 0.90 PPP defensive efficiency is staggering, but even moreso when you consider the Badgers have only faced the league's 4 worst teams (Penn State, Northwestern, Nebraska, and Purdue) a combined 3 times. They still have 3 games remaining against those teams. Bo Ryan is primed for yet another top-4 finish.

THIS WEEK: at Penn State (Wednesday), vs Michigan State (Saturday)

The Wolverines had been slumping a bit, but they responded nicely yesterday in the 2nd half against the resurgent Illini. Michigan ended Illinois' 5-game winning streak and remained in the hunt. The Wolverines have yet to lose at home in conference and still have a chance at the crown with their last game at home being versus Indiana. Before that, however, they will be looking for revenge against the Spartans.

THIS WEEK: at Michigan (Saturday)

The Spartans had a chance to win or lose the Big Ten title this week and they most definitely lost it. After blowing a late lead at home to IU, they weren't able to get an impressive road win in Columbus. Much like their in-state counterparts, Izzo's team doesn't seem to be faring well during a grueling 4-game stretch. Their next two games are against Michigan and Wisconsin.

THIS WEEK: at Northwestern (Thursday)

You couldn't have asked for a better response for Thad Matta's program after an embarrassing loss in Wisconsin. The Buckeyes continue to be a tough out in Columbus, especially when Aaron Craft turns in the offensive performance he had yesterday (21 points) versus Michigan State.

THIS WEEK: vs Nebraska (Saturday)

The Illini avoided what could have been a dreadful loss at home to Penn State, but couldn't pull the upset in Ann Arbor. This team's turnaround still has been impressive and they remain in solid standing for March Madness, as long as they avoid a potential disaster this Saturday at home.

THIS WEEK: vs Purdue (Wednesday), at Indiana (Saturday)

The Hawkeyes' suffered a devastating loss at Nebraska this past weekend, one that could ultimately keep them out of the NCAAs. They coughed up a 16-point halftime lead to the 13-14 Cornhuskers who rank 92 in the RPI. Without doing the research, many have been saying Iowa is all-but-out of the dance, but I'm not so sure. They still have a manageable schedule down the stretch with 3 out of 4 at home. And while unlikely, they could somehow pull off a miracle at Assembly Hall this weekend to get right back into the race I would think.

THIS WEEK: at Iowa (Wednesday), at Wisconsin (Saturday)

Purdue got back on track after pounding the hapless Wildcats of Northwestern. This team surprisingly has won 6 conference games despite some of their recent uninspiring performances. They have a chance to upset some teams down the stretch if they shoot the ball as well as they did last night.

THIS WEEK: at Wisconsin (Tuesday), at Illinois (Saturday)

The Cornhuskers stole another big game at home versus Iowa, who needed the win to keep their postseason hopes above water. They have now won 4 conference games, which is an impressive feat in Tim Miles' first year as a head coach considering the status of the roster he inherited. Three of their last 4 games our on the road, however, so we'll see if they have more magic up their sleeve.

THIS WEEK: vs Indiana (Tuesday), vs Penn State (Saturday)

The Gophers have big, big issues as they're on the brink of an epic collapse. It wasn't too long ago when Tubby Smith's squad was in the top 10. They've now lost 8 of their last 11 and now must host the nation's #1 team on Tuesday. If they lose that game, they'll be 6-9 in the conference heading into a pivotal matchup at home against PSU, who has inched closer and closer to their Big Ten win.

THIS WEEK: vs Michigan (Wednesday), at Minnesota (Saturday)

To most, if not all, there's no logical explanation for Penn State to not be last in form of power rankings. They are on a 14-game losing streak for crying out loud. But as you'll read in further detail below, it's undeniable that PSU and Northwestern are two teams headed in different directions. The Lions have found a new offense with their new threat in Sasa Borovnjak and look closer and closer to ending their 2-month losing streak.

THIS WEEK: vs Ohio State (Thursday)

To say the Wildcats are struggling would be an understatement. They've lost their last 3 games by a combined 80 points (26.7 PPG). They've only scored 0.70 points/possession in those 3 games and have been outscored by 0.45 PPP. Conversely, Penn State, the worst offense in the league, has only scored at a rate that low in only one conference game this year. Sure, the Wildcats had a terrible string of luck with injuries (they're down to 8 scholarship players), but this might be the year Northwestern makes the NCAAs the Bill Carmody Era comes to an end.